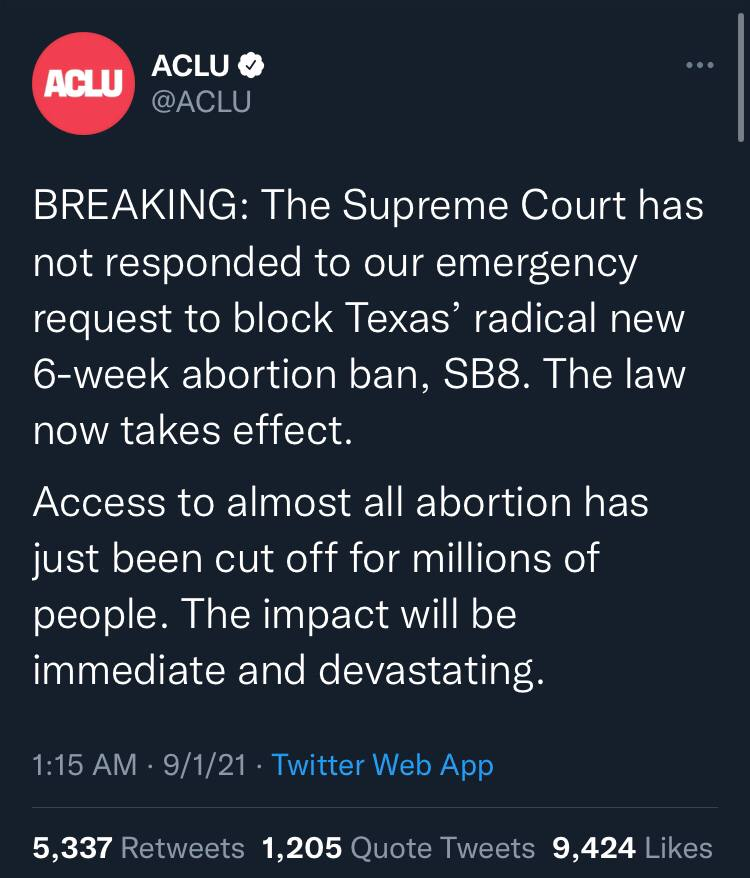 Access cut off for millions? No, millions do not need their services

Millions of people, not women, people. You know, for all those men that think they're women that would need an abortion.

That would be an enema. Get one at Walgreens.

Honestly though, if I was a baby killer and some male tranny lunatic came in for an "abortion" because he had a stomach ache, I'd just make some shit up, pretend to perform a "procedure," then I'd charge it thousands of dollars.

Hell, they can come to my local garage and we'll jack 'em up on the car lift and sort them out.

I think you've got a million-dollar idea there.

Oh no! Texas liberal trash have to fuck each other responsibly now! The horror.. Hey you liberals can always move to a blue shithol- I mean paradise and kill your babies there, how about that. bye.

FYI less than 1% of abortions are life saving, the other 99% are for "convenience" or non-life saving purposes so stop with the "putting women's lives in danger" bullshit.

The “putting muh lives in danger” argument is based on the “logic” that women will let hobos mutilate them with wire-hangers in alleyways unless the doctors murder the babies ‘safer’ and more comfortably.

It’s the same mentality that wants slaves in China to build her iPhone, State police to come shoot the dude for her, and factory farms to kill her chicken dinner and put it in a pretty box.

They can always move to a blue paradise and kill their babies.

But moving to a blue paradise also puts them in danger...

the leftist wheel of fortuna keeps squeeeeling as it turns

Today, all of those pro 2A laws went into effect throughout Texas. The Heartbeat law is now in effect. Now maybe we'll see a mass migration of lefties moving out, fewer moving in and MAGA to backfill the lefties we have purged. We also passed our voter integrity bill last night. Great week for Texas!

wonder how those babies feel???

They be feeling pretty hispanic if I had to guess

How devastating they will have the opportunity to live.

These people are sick AF.

Devastating for Hillary clinton. She'll have to bathe in fetal blood from other states

A "devastating" and "tragic" retention of lives that would have otherwise been lost at the hands of their own mothers.

The impact will be immediate and devastating.

Translation: Women will have to take responsibility for their actions, and we don’t like that.

Further Translation: Liberal Men can't pressure women into getting abortions so they don't have to man up and be dads

I think the responsibility will flow from the women to the men.

Don't spread this liberal talking point. They love to paint the situation as men can just fuck off when they knock up a woman and not have to deal with it, but abortion is women's only equivalent option if they can't or won't deal with the consequences.

Even Hunter Biden had to face a court order for a paternity test and child support. The guy got away with corruption, pedophilia, drug use, and prostitution, but even he couldn't get away from taking responsibility for knocking up a stripper.

but abortion is women's only equivalent option if they can't or won't deal with the consequences.

Wouldn't giving up the child for adoption be the equivalent option?

Yeah, but you have to wait several months to do that. If you can get an abortion you can be back to twerking in your underwear on TikTok in a few days.

"The impact will be immediate and devastating" (Think about it) - To whom? Devastating to the FDA Caught Buying 'Fresh' Aborted Baby Body Parts From Dealer... https://thefederalist.com/2021/04/15/federal-government-caught-buying-fresh-flesh-of-

Shocking new evidence reveals government-sponsored research on human fetuses is being carried out at the University of Pittsburgh - and Planned Parenthood is trafficking the test subjects,

I'm pretty sure this is the same ACLU that tried to argue that it's unconstitutional to ban Mask Mandates.

I'm old enough to remember when Obama told us we needed to pay to give every slut and slag free birth control under the ACA so we wouldn't need abortions.

I'm sure he's as shocked as anyone to see abortions have gone up YOY every year since ACA was passed. Turns out selfish psychopaths can't even be bothered to use birth control when its free.

They just wanted to get more estrogen into the water supply

Millions? I understand there are about 5,000 abortions a month in Texas. But that a majority of those got cutoff is a good thing for babies and the adoption industry.

unless they just use a condom.

Not devastating to the babies that it murders...

So devastating, all those babies being granted a chance at life instead of being slaughtered for the sake of convenience.

Even so… the ACLU is way overstating the effect, as women can probably just leave Texas and go to California.

It just imposes a cost which should be enough for 1000s of babies to saved each year.

It would be so devastating to have to be responsible and raise your child. Fuck these evil leftists.

Not for the babies, it won't be!

Babies get to live in a country whose first listed right is that of Life. So radical.

I think millions of babies will disagree with the "devastating" part.

impact will be devastating? oh, you mean like not wanting to sell your 'attention' because you might stay too high on meth too long to realize you are preggers? that you might have to close your legs for a while if you don't have the time to acquire birth control (btw, that shit is free these days) i understand some reasons for an abortion *yes, i know, i am a horrible christian... BUT ... abortion was never meant to be birth control (on one end of the spectrum anyway) but then again, i guess that isn't totally true... hence the 'birth' of planned parenthood. oh.. and if you feel that baby in you moving, and you still want an abortion.. you are a special kind of evil ... smh, stepping off my soapbox

this the same alcu allowing the government to hold political prisoners in the DC jail?

More babies and accountability for carousing around sexually is... devastating?

Even if SCOTUS blocks they should just ignore.

Technically SCOTUS "heard" the case and ruled on it (no standing). Texas should say that already born people have no standing in a case about whether the unborn can be killed.

KEK devastating to who.. the whores who cant use birth control... or take the morning after pill.. or use protection during sex... or have their man on protection...or tell him to pull out before cumming...or wait till married.

Am okay with that, woketarded libtards should be fleeing the state soon!!! Good work Texas!!!

Crime in Houston is going to skyrocket in about 15 years…

Oh my gawd but what about my gagortions? This is a public health emergency!!!

Any word on how devastating to the unborn?

Save babies, abort the ACLU.

The abortion debate doesn't solve the problem, that's kind of the problem here.

As much as the communists and the communist enablers here would like to say that race is a big issue, the determining factor is actually fatherless homes.

So, not letting trashy people kill off their trashy offspring before they're born only creates more criminals.

We're ignoring the problem to focus on our feelings.

Abortion wouldn't even be a debate if we stopped the culture from making it a thing period.

The Impact will be immediate and devastating, if people aren't able to immediately terminate pregnancies?

Only liberals could describe the impact of not being able to murder babies as "devastating."

Oh no, our consequence-free degeneracy is being curtailed! How "devastating"!

Just noticed you need an account to view twitter replies now. Which is great because I don't have an account and will be now forced to stay away from that brain cancer.

Is there a lady pede here who can answer a question for me?

Leftists' argument against this bill is that women don't often know they're pregnant within six weeks. Women generally have their periods every 4 weeks. So what do women think when they miss one, possibly even two, menstrual cycles in that time frame? Why don't they immediately consider they're pregnant?

Periods are less a female clock and more a female barometer. Low precision, but persistent.

Lots of things can mess with a woman's cycle - stress, diet, illness, ironically enough hormonal birth control is the biggest one for knocking a woman's regularity out of whack.

And we haven't even gotten into the social / group psychology side of it yet. You get a bunch of menstruating women together in one place, doesn't matter how out of synch they are, their biologies will be all "Oh, Sue's period starts the first week of the month? Great idea, we should ALL start that early! Oh hey, look, blood lol!"

Even the idea that women have periods once a month is a misunderstanding based on simplification. It's better to say that, on average, women have ~12 periods a year, plus or minus a few, sometimes literally on their whim

And yes, women will also pretend to be on their periods sometimes. It's the perennial excuse for any and all bad behavior, because why the fuck not, it ain't like us men're gonna go digging in the trashcan in the bathroom looking for evidence.

So yeah. One missing cycle is mildly alarming, but these days women are more likely to think of ovarian cancer before pregnancy when that happens.

You know what else is immediate and devastating? The murder of a helpless baby.

WE NEED OUR ADRENOCHROME!!!

Coat hangers are back on the menu, thots!

ironic that it happened under biden regime!

how long before the left starts demanding court packing??

Good. Get liberals out of Texas.