TheDonald
Communities Topics Log In Sign Up
Sign In
Hot
All Posts
Settings
Win uses cookies, which are essential for the site to function. We don't want your data, nor do we share it with anyone. I accept.
DEFAULT COMMUNITIES • All General AskWin Funny Technology Animals Sports Gaming DIY Health Positive Privacy
806 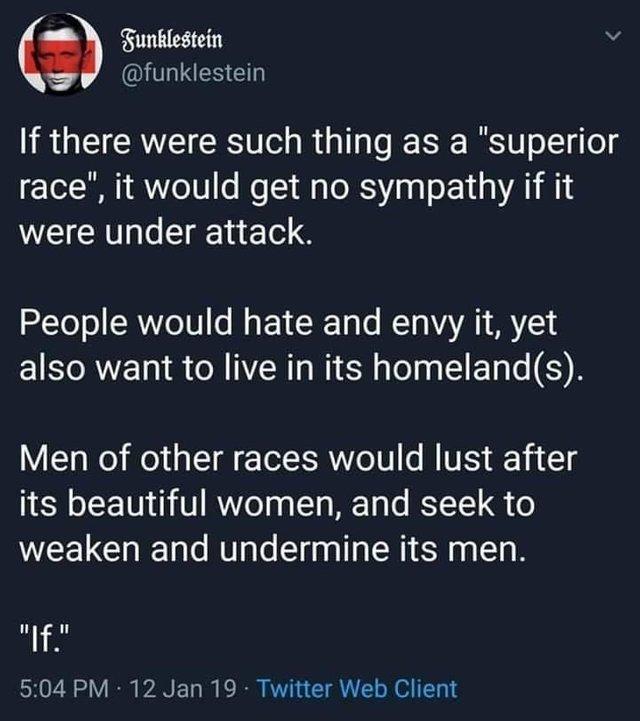 This has been circulating around for a long while.........I saw it first on this site last year....It immediately went into my "best of" directory.

That video link isn't working for me.

Was a clip from this: https://www.bitchute.com/video/nZc1HQJ9rAwY/

People seem to not realize our history and that our country is being stolen from us by corrupt politicians and their cutthroat immigration policies.

And those numbers don't include the actual illegal immigration population. They've been saying "10 million undocumented" for over a decade. Anyone who actually believes it's only 10 million is a fucking retard at this point.

It is funny how this same agenda keeps using different marketing. Depending on their target, they sell it to you as the "victim" or the "victor". Pay no mind that for the most part that the people giving you grief actually look like you.

For poor minorities that have been in the West for generations, their greatest enemy is uncivil fellow poor minorities. Yet Whites that don't live anywhere near you are the main problem? Hell no. We as people are all in the same struggle based upon our INDIVIDUAL value systems.

For Whites, their greatest enemy are (mostly) White business owners, politicians, judges, teachers, and workers. Who is importing cheap labor at a rate that destroys the fabric of society through lack of assimilation? Who is the face of the "right" wing that never stems the flood of said immigrants? Who is destroying rights/freedoms for "security" from those same immigrants they import from countries they wasted our blood and treasure to destroy? Who are the women teaching OUR children to hate themselves, their nation, and their fellow countrymen? Who are male technicians installing the infrastructure of the surveillance state? Yet the "attack" is from the minorities that don't own the businesses, media, any branch of government, aren't teachers, and (allegedly) don't have the IQ to do the tech work? Cause they all want White women? This is just a different side to the same commie coin.

Consider the source. The game is always played by the same group... every... damned... time. The end game is ALWAYS the same. You are not individuals. You are COLLECTIVELY "other". "They" are all COLLECTIVELY against you. You are a unified tribe based on race, despite what you observe from the behavior of the people WE control that WE placed in power over your tribe. Isolate yourself from the "other". Hate them like they hate you. WE aren't like "them" though. Don't mind US. WE are your "friends"... Heard your beautiful daughter wants to be in movies... WE can make her a star... One way or another.

Look the rabbit hole can go very deep. I will admit that I look at things much differently these days.

It's race socialism. Instead of making your own race prosper, you take first place and bring it all the way down to make yourself feel better.

Well this all happened to the west African nations several hundred years ago.

Brilliant. Imagine if that people woke up and fought back...