TheDonald
Communities Topics Log In Sign Up
Sign In
Hot
All Posts
Settings
Win uses cookies, which are essential for the site to function. We don't want your data, nor do we share it with anyone. I accept.
DEFAULT COMMUNITIES • All General AskWin Funny Technology Animals Sports Gaming DIY Health Positive Privacy
3314 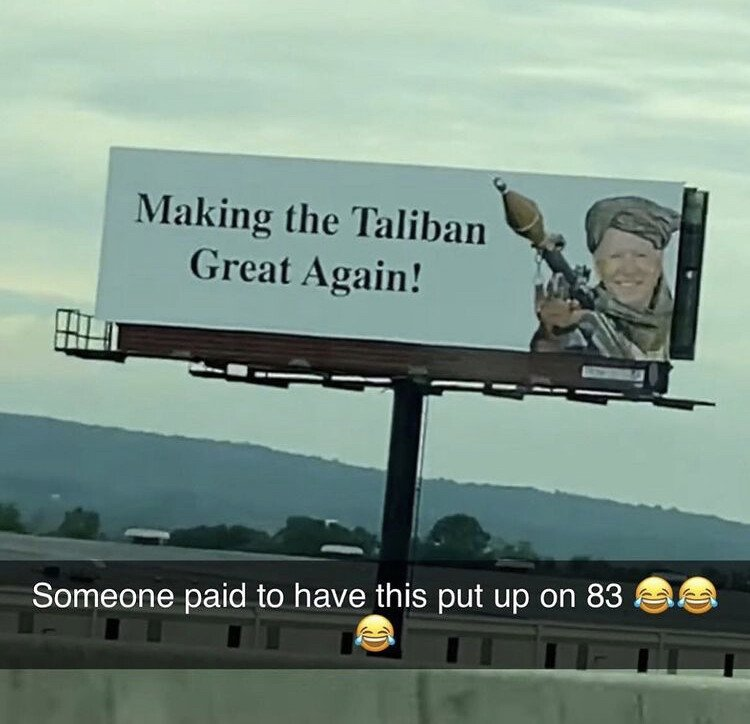 This is how we win folks. Meme them into oblivion.

and then when they cry..... Meme about them crying

thats how we keep winning all these years!!!

Yep, got to go back to real world advertising. Big Tech has been trying to block things form being shared online.

Hijacking top comment.... on 11/15 near Liverpool there is another one of these signs. They seem to be multiplying

Yep, the memes need to escape the internet and start making it into the physical world all over the place.

“”In September of 1777 the Continental Congress, under threat of the advancing British, moved the location of the colonies’ central government from Philadelphia to Lancaster. Since the State of Pennsylvania’s Government was also located in Lancaster, officials decided that a move across the Susquehanna would separate the two sufficiently and the Continental Congress set up shop in the Town of York.

It was in York that the Congress adopted the Articles of Confederation, proclaimed the first National Day of Thanksgiving, and signed the French Treaty of Alliance. All of these events occurred in the nine months York remained Capital of the United States – until June 27, 1778. That is where The City of York made history for the United States, … But since then, York has been part of the growth of this nation as well as the growth of its inhabitants.”

I’ll be in York next month.

Southern York County reporting for duty; will be in York tomorrow looking for this! Even if this is shopped, looking for it will break up the monotony of the drive.

Can confirm it's real. I work in York Co. And drove past it several times last week.

Awesome! We need more of this. Badly. This is very high energy!!

Is this an electronic billboard? Perhaps that why the phot of it looks hinky.

My sources on the ground say it’s not shopped. I’m told it’s on route 83 near the Harrisburg turnpike.

There should be crowd sourcing for doing memes on billboards all across this fine country.

Like WBS + givesendgo but just ppl giving the "narrative" the finger.

I wonder if u can register one without ur real name

Billboards are cheaper than you'd think and the digital ones, like blip, let you sign up and start displaying immediately. I doubt they'd catch on if you use a pseudonym, an anonymous email, and a prepaid gift card. I just checked, and in Philly you can rent ~1.5 hours of display time throughout the day for $20 per day. Much cheaper in lower pop density areas

We have the best rich people.

I hope this is real.

Pretty sure it's real, I live 30 min north. Going to talk to someone that does the drive daily during the week for work.

My sister drives by it every day

It is, drove past it yesterday. Also, there is a second one going the other way, so there are two.

We should Meme this everyday. If for no other reason than to shame them. The criminals that they are.

What state is this? Anyone?

Was able to find a few videos on the snapchat map. Follow 83 north of York, PA. Amazing

Heading up there tomorrow with my Dad. We're going to go looking for it, like the rags journeying to Mecca. Lolz.

Right after you go over the river

There are multiple... Also saw one on 322 in cenrral PA 😂😂😂 The rumor is that a donut store paid for them but idk which one or if its true.

Maple donuts usually has billboards up and down 83 in this same area, I wonder if they might be involved. Not to mention stores on the north and south sides of this particular sign on I83. Edit: after some digging, they had a billboard up in 17 about taking a stand not a knee.. I'd say that might be an indication.

maybe Duck Donuts? they seem big enough to handle something like that

That is damn funny. Lol

If your opponent is of choleric temper, seek to irritate him.

This is legit. It's in central PA along highway 83

I want this shirt

Those are a available from thelibertydaily(dot)com. I have the traitor joe’s one from there.

Why can't we do this more often? There's a lot of us. Let's say we all contribute as little as a dollar a week - we could have billboards all over.

Seems like we could get that up ALL OVER THE NATION - FOR NOT ALLOT OF MONEY!!!

How much do these run?

Al Qaeda are not the same thing as the Taliban. Our enemies were/are Saudis and they were hiding in Pakistan the whole time anyway.

Just saying, I couldn’t give two shits who runs that craphole of a nation.

You are very wrong about that. Taliban ideologically are the same as Al Queida. One of the largest factions of the Taliban is the Haqqani Network which supports the same exact terror attacks as Al Qiueda.

The terrorists were Saudi, bit they were not acting according with the Saudi beliefs or government. Bin Laden was a wanted man in Saudi Arabia, which is why he took refuge in Afghanistan

which is why he took refuge in Afghanistan

The invasion of Afghanistan did nothing to quell global terrorist activity.

He took refuge in Afghanistan prior to the U.S. invasion and we didn't have another 9/11 for 20 years.

Why you schilling for the Taliban?

I’m sure those who died in Boston would be glad to hear that.

Staying for 20 years and pretending the Afghanis even wanted democracy is just fucking retarded.

How much does a billboard cost?

Various pricing depending on area could be anywhere from $900 a month up.

This is an excellent idea for patriot groups to unite and raise funds for. I suggest make one with the $$$$ 84 Billion dollars handed to Taliban in equipment left behind in large bold print. Taxpayers money. This is what will wake people up. The majority do not know this number and when Trump mentions it at the station in NY when he speaks you can't hear a pin drop in the room. The reality of that = treason. Not dementia. I don't think people should focus on Bidens real or fake dementia. That only sets him up for a replacement with another deep State puppet.

It is treason. He and deep state know what they did. An enemies crimes must be boldly stated publicly to spread the truth. They sold out our country threw us under the bus. This is a crime of biblical proportion.

Built them back better, for sure.

Should have used their retarded NWO phrase -- "Build the Taliban Back Better."

Jihad Joe is frunny and cool and all... but BILLBOARD PEOPLE, please drop a shocking and direct Women's Rights (NOT) pill to these feminista commuters. Joe's Taliban circle-jerk is a direct attack on everything Women have fought for, for 100 years!

Taking up where Bin Laden left off.

Who gives a shit?

Not photoshopped. I drive past it 1x per week. I cannot take a photo as I am recorded always as a truck driver.