TheDonald
Communities Topics Log In Sign Up
Sign In
Hot
All Posts
Settings
Win uses cookies, which are essential for the site to function. We don't want your data, nor do we share it with anyone. I accept.
DEFAULT COMMUNITIES • All General AskWin Funny Technology Animals Sports Gaming DIY Health Positive Privacy
4144 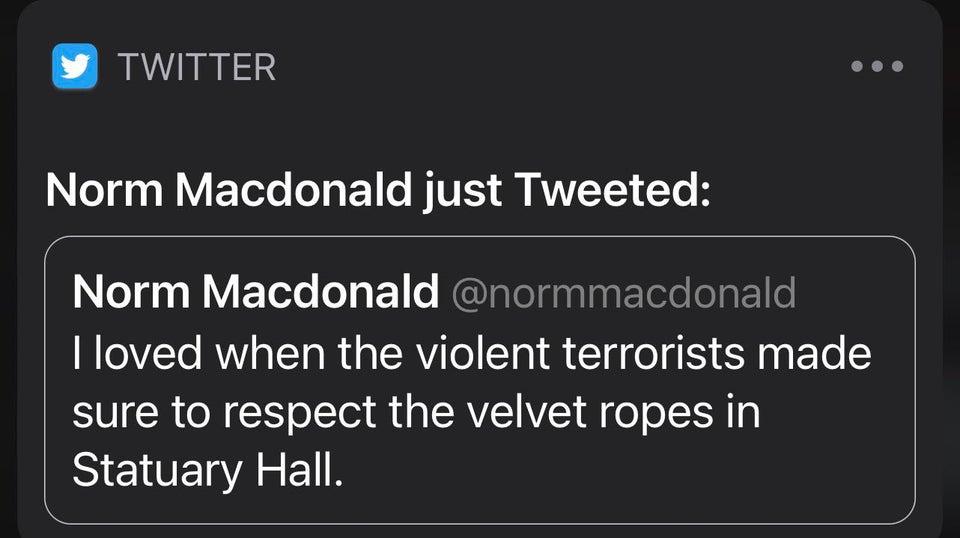 He may have been Canadian but he was more American than any democrat.

You've got that right.

There are a lot of based Canadians. Frankly you'll find them less on the internet, and you sure as HELL won't see it in the media or show-biz.

Norm MacDonald was as proud exception of public figures. We have some good people in this little pseudo-communist country.

There are actually a surprising amount of notable ones on the internet.

Oh dude, he's got voxday.net Owen Benjamin was drummed out of the circulation. Owen had the strength to not project his nine years of cancer. Only in the last3 even comedians even knew and there was a period when he didn't even tell his family.

Stop being a purist.

I think that had a lot to do with temperament. And if I recall correctly from Toronto. These influence us, but I think he was a decent and smart man who said what he thoughts with 0FG.

Damn, that makes him not funny. You sound like a shitlib.

Only cuz its hilarious to be

Norm would talk about hiding terminal illness from people as an honor. I never suspected he was sick, though. I consider him one of the funniest comics ever. When he was next to someone "funny" it was apparent he simply had more talent. He was just a complete natural. His career was very touch and go and I think the entertainment world shunned him to some extent because he didn't seem to think like them typically. He persisted despite them, and because of the demand from real people. Some of his best stuff is just him doing interviews, and he actually had some profound insights into God. I still tune into these from time to time.

In a world full of Jerry Seinfelds, be a Norm MacDonald. Dude was legitimately great.

One of the few celebrities I feel any loss over, and the only comedian among them.

Fuck Jerry Seinfeld. He was propped up by the other 3 main cast members and he was never funny. His comedy was just so forced and his acting talent was non existent.

"What's the deal with periods? If women have periods once a month, do they have commas once a week?"

it was funny in the 90s. you weren't there, you wouldnt understand

Larry David has entered the chat.

Norm Macdonald Has A Show was great. His podcast Norm Macdonald Live, the first season and to an extent the second season were probably the funniest podcasts ever made

The first season of Norm Macdonald Live was excellent. I think youtube took most of it down though, the cunts.

No worries. No one has made me laugh like him, a real shame.

Try Patrice O'Neal. A comic's comic. There isn't a single comedian who spent time with him that wouldn't put him very high up in their list of all time greats.

His podcast The Black Phillip Show is one of the best redpills on female behavior. And he would lay some good smackdowns on Karen callers.

Holy fuck, whoever ran that page is cancer.

I've noticed Norm's audience becoming ever more toxic and far-right wing recently, which seems to me to be against everything Norm would ever stand for

The only reason Norm wasn't a complete outsider to Hollywood was because he's such a likable guy even leftist celebs liked him. He had no issue taking political jabs but that wasn't his life. But make no mistake, since the left ramped up their intolerance and division in the 2000s his career was mostly just random blips here and there because they wouldn't dare let him get more work than that.

I saw that. What a fruitcake.

The Steven Merchant one was hilarious.

When he cracked up at his own jokes it was the funniest thing ever.

"The teachers are the real heroes!"

You only need a fourth grade education to teach 3rd grade.

i would have loved to have been there live for that.

Me too fren. A classic.

He built cracking up at his own jokes into his act. He pulled it off like no one else can.

Norm was absolutely shunned by the entertainment world for his views. They allowed him to persist in the 90s because they didn't have such an authoritarian grip on everything.

But Norm still managed some key appearances on late night shows and had popular celebs on his show simply because he's a well known name and everyone who isn't uptight, like The View hosts are, liked him. He's a genuinely likable guy and that kept him capable of attracting some famous people as guests for his podcast.

There's been a couple of his appearances on different podcasts where he would start to get deep into some subjects, and it was actually smart, thought-provoking stuff. If you haven't heard them I recommend it. I think one is with Marc Maron and another was a guy and girl show. And he's still able to be funny.

Norm had a segment on one of his later shows where he said "The worst thing about a dirty bomb going off in NYC would be the resulting islamaphobia."

He said it with a serious tone and was hoping that his guests would get it, but when they didn't he just kind of rolled his eyes and moved on with the next bit.

I think Norm was bored with most of the people he was interviewing or being interviewed by. Bunch of libs. And I wouldn't call Norm a right-wing person, but I think he realized they're a bunch of fakes and schmucks scared of the business they're in. He toyed with them. There's one event he was doing for MTV I think, and he's dressed in sweats and completely off script, and he's making the other people noticeably uncomfortable, and yet he's the only one being funny or interesting at all. I actually think he's at his best just shooting the shit in interviews over his shows or in movies.

The one where Sarah Silverman sits down with them and they're outside from a few years back.

And he savages them.

Oh yeah, I think they were doing something with ipads or something.

I'm watching it. It's absolutely it. On the silverman part LLOL.

"no offense but it sounds like some commie gobbliegook. i've never heard the word collective without leon trotsky"

Wow, that is weird. He’s with the Lord now.

It doesn't surprise me at all.

Liberals killed comedy by becoming offended by everything. Tim Dillon is the best modern comedian

Funny that Tim is gay as fuck. I Didn't know that til recently despite following him but hes fucking top notch hilarious

It makes it great because Tim shits all over the left breaking the norm that gays need to be liberal. He has an episode where he talks about how most gays are deep down conservatives

I remember that one. God bless you Norm.

We truly lost a legend today. Norm was my favorite comedian of all time, and I was shocked to hear the news today.

I’ve gotta admit, the last few times I saw him he didn’t look good, but I was just chalking it up to age and may have been willfully ignorant.

I’ll be gutted over this one for awhile.

Good man. Never wanted any sympathy from is diagnosis.

He didn't want us to stop laughing

The adam sandler crew and most relevant comedians are red pilled. Comedians provide commentary for our times.

Yes hes kinda based. But hes no Norm.

I like some of his comedy. A few years ago I wrote him off as a bit goofy humor. But I've never seen him wax preachy.

ROd SChieder is: THE CENTIPEDE, coming to a theatre near yoU!!!

Norm had no filter, and gave zero fucks. He was a gift

very funny man, and there was even a picture I think added to the tweet, people do not know what a national treasure they lost today! He was one of the best! Never held his punches, always stayed true to himself, and to the TRUTH!

Norm, you were amazing! Rest in peace, sir!

We lost a brother. He was one of us.

Keep on keeping on. Dont be guided off the goal, we must win in the end. RiP Norm

Ahh, shit - he was awesome. Zero fucks given, even coming to the end of the line.

Thats turd furgison to you, bigot

Norm was a jewel. On a completely different level. Not like most of the other simpleton funny guys.

I read it in norms voice😔 R.i.p. legend

That moment when you're going to upvote, see a particular number, decide not to out of respect for all concerned. RIP Norm, one of the greatest comedians of all time.

Police invited them inside.