TheDonald
Communities Topics Log In Sign Up
Sign In
Hot
All Posts
Settings
Win uses cookies, which are essential for the site to function. We don't want your data, nor do we share it with anyone. I accept.
DEFAULT COMMUNITIES • All General AskWin Funny Technology Animals Sports Gaming DIY Health Positive Privacy
3287 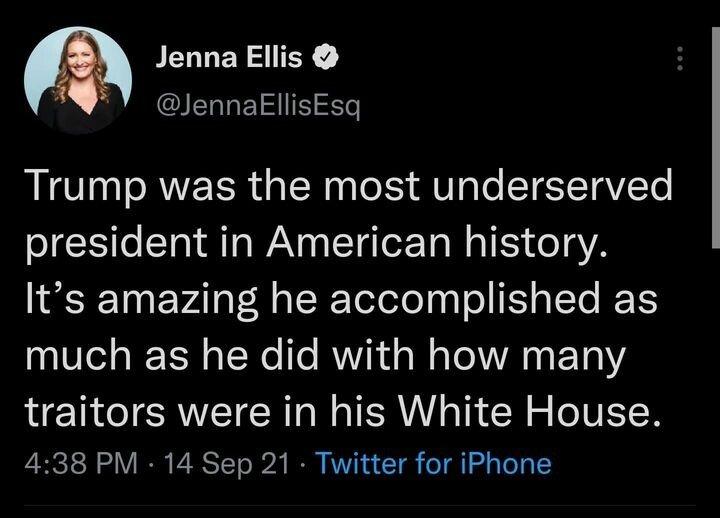 The "adults in the room" narrative was proven to be a lie based on how fast everything fell apart after he left.

Trump built Empires, gave countless people jobs who had families that had families. Trump was on every magazine, in songs and movies. This is a man that received the Ellis Island Medal of Honor in 1986 with Rosa Parks. Trumps not perfect like all of us, but Trump is America, and absolutely deserved to be the President.

There, I fixed that for you.

None of us are perfect...making him jjst like all of us.

I love watching this video of Jordan Peterson redpilling himself about Trump's IQ.

Indeed. This post should be pinned. But the corrupt mods here play their little favoritism power games while Rome burns.

He hired many of them himself.

Who could he have hired that isn't an establishing shill traitor?

Me. You. Fuck, even Anaconda.

Yeah, I admit that anaconda might be better than half the biden administration, lmao.

I used to post on a Michael Jackson fan forum.And there was this user -MJfanforlife.I swear she and Anaconda are the same person. Ubiquotous.Filled with unpopular opinions.Ready for an internet fight at all times😂

It takes a real man to say the words "I used to post on a Michael Jackson fan forum".

Not all here are natural males. Probably more of us here are actually natural female than you know.

Putting "natural" in front of those words is as clear a sign of the Fall of Western Civilization as I've seen.

Not sure. All I know is Omarosa, Scaramucci, Preibus, Rex Tillerson, McMaster, Comey, Rosenstein, etc are awful choices. Maybe there is no one better to choose from, I dunno. His endorsements are shit, too.

Okay, let’s break this down.

Omarosa - the villain from The Apprentice that everyone loved to hate, a real backstabber. She left the administration under weird circumstances, and led the media around by the nose for about a year with bombshells that fizzled, and “secret recordings” that were basically nothing. Was she a disgruntled employee, or did she play the role she was hired to do? GEOTUS had to know who she was before he hired her, so who knows?

Scaramucci - his only function was to get Reince out. They hated each other, and the moment Reince quit, the Mooch was out.

Preibus - he was a concession to the GOP. He came from their list.

Tillerson - We needed an expert on foreign oil and foreign policy in this sector while we wrapped up operations in Syria and Iraq. Who better than the guy who headed up Exxon/Mobile and had strong ties to other interests and actors in the Middle East? Once he served his role and we wiped out ISIS in Syria and Iraq, he was gone.

McMaster - another concession to the old guard deep state crew.

Comey - he didn’t hire Comey, he fired him, so I dunno where this one came from. Obama hired Comey.

Rosenstein - He didn’t hire this guy either. He was assistant attorney general, and as soon as Sessions decided his entire job was a conflict of interest, Rod took over the Justice Department.

President Trump was a businessman, and had a CEO brain. In a business environment you hire people for a specific job, where they have expertise, then when they’re done you bring in the next guy.

GEOTUS was also limited by what the swamp would approve, since his cabinet picks, etc had to be approved by the Senate. The Senate wasn’t going to confirm candidates that wanted to drain the swamp, only swamp monsters need apply.

We need to figure a way around that for the second term, or its gonna be the same kind of delaying all over again...

He can send congress home and then appoint whoever he wants.

I don't believe he can "send congress home." Wasn't the issue with the Senate that Mitch never officially recessed? Can't have a recess appointment if you're never in recess.

Section. 3. He shall from time to time give to the Congress Information of the State of the Union, and recommend to their Consideration such Measures as he shall judge necessary and expedient; he may, on extraordinary Occasions, convene both Houses, or either of them, and in Case of Disagreement between them, with Respect to the Time of Adjournment, he may adjourn them to such Time as he shall think proper; he shall receive Ambassadors and other public Ministers; he shall take Care that the Laws be faithfully executed, and shall Commission all the Officers of the United States.

He can send them home under the right circumstances. One house by itself coming up with its own time is enough for him to do this.

It's a tough racket, finding honorable people who want to work in government.

Have you heard the Omarosa veterans meeting story?

His biggest mistake was not firing more people.

Specifically, not firing one person in particular was clearly the worst thing Trump ever did.

I think our world would be a much better place today if he just fired Fauci.

He was given a list of 10,000 of people outside the beltway. He was convinced to hire establishment.

His appointments had to be approved by the Senate. Mitch McConnell made sure they were all players for the Deep State.

Maybe he shouldn't have endorsed Mitch McConnell then!

This. He should have fired most of them from the start like we said.

I've always wondered if there were more special councils going on the we new publicly.

The problem is they are all traitors and there is only one Trump.

I've said this same thing sooooo many times - Imagine what he could have done if he had any allies of significance...

He chose a lot of those traitors too to be honest. Hopefully if he gets in again he knows not to trust these establishment Republican.

Many were recommended by Bush loyalists. Back then we didn't fully know what that meant. We do now.

Eating all the junk food, bulking up and inspiration for trump to drop some pounds and look better than ever!

Okay, but Jenna also claimed there was no election fraud and that Trump lost.

It was on her Twitter page. Sorry, can't go through months of posts but it would have been after the election and before the inauguration

Every left and right there was a traitor waiting to stab him in the back. He took many slashes and stabs but continued on.

Trump can fix this if he can get one ally as a Senator. McConnel prevented Trump from having any recess appointments, the first time in US history, by always have the Senate in session, pro forma, even when they were clearly on vacation. A pro forma session requires unanimous consent, shows you all 100 Senators are corrupt and need to go, even Paul.

This is why the uniparty is desperate to stop a candidate like Herschel Walker, I believe McConnel has said he would support the Democrat against a candidate willing to back Trump.

Traitors everywhere. The white house, congress, in the courts, in the military, and in law enforcement. Fighting an uphill battle from day one everywhere in every forum.

I didn't take him seriously when he ran for the nomination. When he won that, I figured Hilldabeast would be the next president. When he won the election I figured even if he meant everything he said he would be stopped (stabbed in the back) by Congress, no matter what party was in control.

Despite all the obstacles he accomplished more for average Americans than any president in living memory.

Been saying this since this was on eddit.

Traitors need to be MADE AN EXAMPLE of... Live in front of The American People.

And in the governor's offices too.

Now he is the most popular human on the entire planet. Funny how that works!

Trump is amazing (don't get me wrong) but sadly Trump seemed to be an expert at choosing traitors & snakes who stab him in the back which wasted precious time.

Idk if that was him or his advisors who advised him to hire those traitors.

Reformers are never popular. And frankly never get anything done through cooperation with the establishment.

Yeah but how the hell did he attract so many traitors. The entire situation sucks

Well it's good news when the grifters come back out of the woodwork looking for a job with GEOTUS !

Yeah underserved including the legal team fighting the election fraud right after it happened, Jenna.

Trump was the anomaly. If he o ly had the courage to run again as a Independant! He would crush this Uniparty!

No need. He pretty much owns the GOP. RINOs are an extinct species walking.

Not when he keeps endorsing RINOS’s