TheDonald
Communities Topics Log In Sign Up
Sign In
Hot
All Posts
Settings
Win uses cookies, which are essential for the site to function. We don't want your data, nor do we share it with anyone. I accept.
DEFAULT COMMUNITIES • All General AskWin Funny Technology Animals Sports Gaming DIY Health Positive Privacy
1628 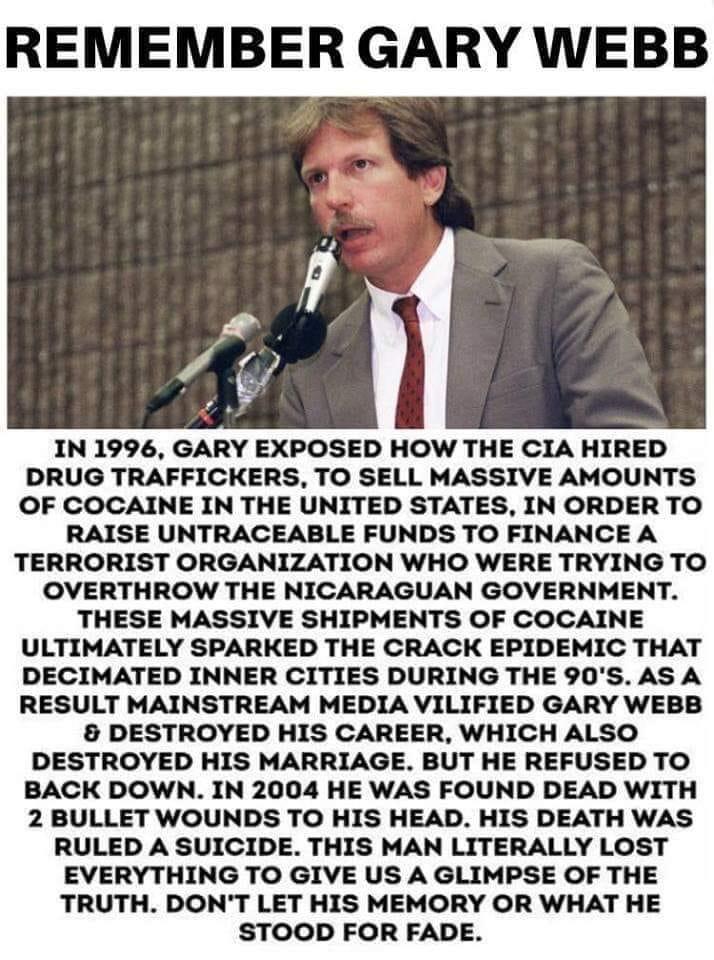 Also be sure to check out Danny Casolaro.

And yet they couldn't get to Snowden who leaked actual classified material, whereas Gary Webb just wrote a fuckin' book?

This is like the same retard belief that a fucking mail-sorter in Georgia was "drone striked" to stop an audit, yet the thousand other people involved with every other audit were not blown up or murdered. Not only that, but they did it so perfectly that it resembled a three-car pileup accident in every single way, without even a single molecule of forensic evidence that anything was amiss.

Because I guess that's how you carry out "message-sending" assassinations, you do it really quietly in a way that nobody questions.

Kind of like how when the Mafia would send someone a message, they would give really obese people heart attacks and smokers cancer. You know, to make it look like it was natural causes. BuT tHaT's ThE mEsSaGe

Not the most crazy "suicide" out there. There was an MI6 spy that was found dead in a duffle bag. That was immediately ruled as a suicide.

If they wanted to kill him and for it to look like a suicide, why would they put him in a fucking duffel bag?

Maybe he had a pistol that had a 2-round burst mode. Or a double-barrel revolver?

He was murdered. Try find the photos from the investigation of his cabin, they tell a totally different story than the "official narrative".

Kill the Messenger is a great film about him. Jeremy Renner does a good job playing Webb.

The book is Dark Alliance. Freeway Rick spent some time in Texas growing up in the town right next to mine.

That's right. Only God will win the battle for governance, at the time of His choosing. But we must not get discouraged. We are to look up joyously knowing salvation is this much closer. The battle we are engaged in is a battle for souls, for our own and for others. Satan will seek to make us fall prey to fear and feelings of hopelessness to destroy our faith.

If things were truly hopeless fren this board wouldn't even exist and Trump would never have become president. Don't forget 2016, she was never supposed to lose. Nobody on this board has any excuse for dooming/ blackpilling freaking Nicki Minaj is throwing out redpills now. Things are FAR from hopeless. Take heart fren, hold a vision of America's bright future without all the scum infesting our world close to your heart and fight for it unyielding with you everything you've got. Never stop believing in it and victory and pray to God for the strength required to carry it out.

Shit like this makes me black pilled that the globalists and cia will never fall.

That's the point, that's why they spread the conspiracy theories...

Michael Rupert carried on a lot of similar work into the 90s and 2000s. He passed away a while back. There a documentary about him called "Collapse" (2009). It's worth watching.

Read Ruppert's book "Crossing The Rubicon: The Decline of the American Empire at the End of the Age of Oil".

Great stuff with Dick Cheney being the main villain behind 9/11.

Guess who was working for the Nicaraguan government at that time.

Pray for his soul

That poor dude. He was a hero.

Yep, everything wrong with the black community is all the CIA's fault. That's definitely a good ideology for us to adopt

This is a throwaway. My account just got banned for pointing out that the nicaraguan government at that time was communist and supported by democrats who cut CIA funding. So CIA was trying to bring down a communist government but unfortunately these days CIA has been infiltrated by communists. WTF is happening with this website?

So let me get this straight.

He writes a book.

EIGHT YEARS after the book was written, they "murder" him, and deliberately make it look like a murder.

Eight fucking years? That's how long they waited specifically to make it look like murder?

Funny how this meme doesn't mention that the government completely cleared itself of wrongdoing, literally nothing changed anywhere, and nobody was held accountable.

In other words, the government had already won. Nobody cared. His book was going to eventually be forgotten.

But in your double-digit IQ high-school dropout conspiratard fuckbrain minds, you think that EIGHT YEARS after the fact, the government not only then decided to kill him, but they did it specifically in a way to make it look like a murder, thus drawing attention to him and his book?

One of two things must be true.

But in order for this to be true, they wouldn't be capable of masterminding all these other elaborate conspiracies that you morons believe. Somehow they blew up three buildings in New York and nobody has even so much as found a piece of det cord.

In order for that to be true, then they wouldn't have murdered Gary Webb, because why the fuck would they? To "send a message"? To fucking who? The government couldn't even fucking get Snowden or Assange, and you think they just offed Gary Webb 8 years after he wrote a book that made no difference to anybody?

Please stop re re re posting this. We get it. Or post to conspiracies.win but they'll get pissed off too