TheDonald
Communities Topics Log In Sign Up
Sign In
Hot
All Posts
Settings
Win uses cookies, which are essential for the site to function. We don't want your data, nor do we share it with anyone. I accept.
DEFAULT COMMUNITIES • All General AskWin Funny Technology Animals Sports Gaming DIY Health Positive Privacy
1469 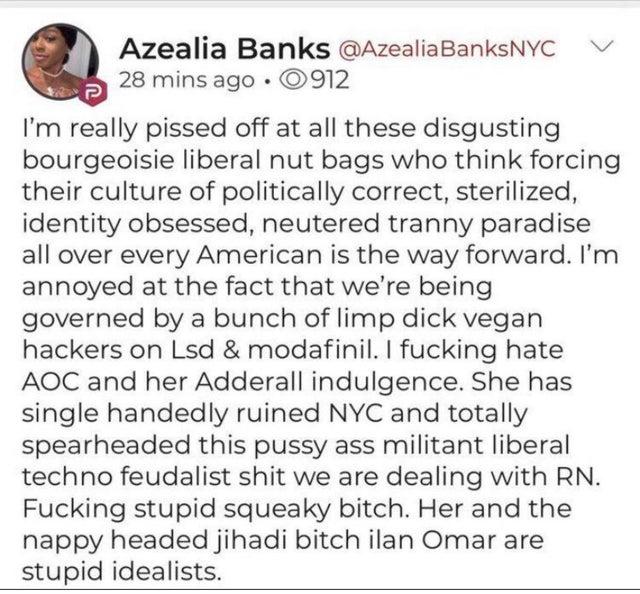 Can't wait until she comes out swingin...

Now...why the hell do I all of a sudden care about what she has to say. THAT IS FIRE!!!

Before you start sucking her dick, you should know she's a Satanist:

She's a "satanist" in the same way a lot of "satanists" are: Publicity.

Hmmmm.....I'm gonna have to take a hard pass on the Satanism.

Oh shit she failed the purity test. I guess that invalidates what she did?

This always makes me laugh

Think a lot of people are getting sick and tired of bitting their toungue's. This could be the birth of a global wake up call.

I think you are on to something. The only police that should be defunded are the PC thought police. The tanned ladies have had enough. Excellent. I’m pale and I’ve had enough too. The pendulum is swinging back and holy smokes, this is great. Minaj and Banks, I salute you.

I think Nicki Minaj empowered Azealia to speak her mind, too. I’m not really super familiar with either so maybe both of them have always been breathing fire. It is actually refreshing to see these strong black women standing up to the current bougie ruling class. Take that, AOC and Ilhan Omar! The “squad” has met their match!

Not related, this screenshot is like a year old

Thx, pede. Sounds like she has always been spicy! 🌶

Yea she had another one roasting liberal white men. Can’t remember what she said, but was equally spicy and hilarious.

Makes sense that a rapper would have a lot to say. Her old post above sounds like she could spit that in rapid fire!

No idea who she is, but first impressions are I like her.

This is a Wendy's

The enemy of my enemy is my frenemy. (ಠ⌣ಠ)

This girl is a psychopath

oh yeah and she is vaxed BTW -- from gawker

That doesn't make her a psychopath. I could see some bored and drunk teenage guys pulling stupid shit like this.

Her cat’s name was Lucifer and she practices witchcraft, animal sacrifices and all. https://vigilantcitizen.com/latestnews/azealia-banks-dug-up-her-dead-cat-named-lucifer-and-cooked-it-on-instagram/

Lucifer isn't Satan. Common misconception among Catholics and others.

I don't know about the LSD. I know our deep state would macro dose people with that shit.

Kary Mullis took LSD and credits it with helping him develop the PCR test:

LSD actually played a huge part in my awakening process. Made me feel more connected with myself, nature, people, and god.

LSD made me feel totally entertained while looking at a wall. There is no wonder all these substances are "regulated". Psylocybin absolutely cured all of my depression or what you might call "not feeling good".... haha

Yep! Sometimes all you need is answers.

As a teenager, I was a self-described "hippy", tried LSD for the first time at 18, it helped me get away from that terrible culture. It set me on the MAGA path years before that was it's name. Made me rethink being an atheist (I now align most closely with the Christian view on God). Helped me gain a lot of self respect. Helped me realize I was being an idealist in a lot of situations where being naively optimistic is DANGEROUS.

I think after your first few full on trips, though, a microdose (1/10th a normal dose at most) is the way to go, because you maintain your motor functions. If you think you need large amounts after your first few times, you're abusing it, and you'll get very little from it. It is NOT a party thing, and anyone who claims it is, is being extremely irresponsible.

If anyone decides to ever try it, be sure you have ABSOLUTELY NO responsibilities for at least 48 hours, take LESS than you think you'll need, (you can always take more after 2 hours, you CANT TAKE LESS!) don't dare drive a car, get a test kit (there are lots of actually dangerous drugs that can be presented in the same form as LSD, which are impossible to discern without a test). Ideally, do it with an experienced friend who can help you out if things go badly. Have your favorite music on standby. Look at your family history, if there is any history of mental illness in your family, stay far away.

Sometime back, I heard that micro dosing was a big thing with the Silicone Valley crowd.

Well, alrighty then. I agree with most of this. AOC and aderall? Interesting.

Omar ain't got enough goods to be a nappy head, bitch is 3/4 bald.

How many times are people going to post this same shit from this chicken sacrificer?

It's real but this is old. It keeps getting posted every now with no context, no date as if its recent.

I have seen this here a dozen times already but I will upvote it everytime because THIS SHIT IS FIRE!

Never thought in all my life I would like any of these people.

I love it. People are finally tired of people imposing their will on others, I've been there since before they said 2 weeks lie.

Let's all fight for freedom. You can only control what you do.

And some how Azalia Banks is still the worst person in the post. She is as racist as they come

My goal in life is to be everything CNN hates.

But tell us how you really feel

That crazy bitch made the video with the most satanic illuminati symbolism packed into a few minutes I've ever seen. I doubt she's ignorant of it. https://www.youtube.com/watch?v=iFe-sfJeh2E

But how does she really feel?

That about covers it.

Techno Feudalism is a great term for the great reset

I get the hate, but Rep Alexandria is a bit player in this whole, and it's infinitely more useful to out the top-level foreigners behind all of this shit, rather than one jap who will be forgotten in a few months

THIS ONE HAS A BRAIN.