TheDonald
Communities Topics Log In Sign Up
Sign In
Hot
All Posts
Settings
Win uses cookies, which are essential for the site to function. We don't want your data, nor do we share it with anyone. I accept.
DEFAULT COMMUNITIES • All General AskWin Funny Technology Animals Sports Gaming DIY Health Positive Privacy
1094 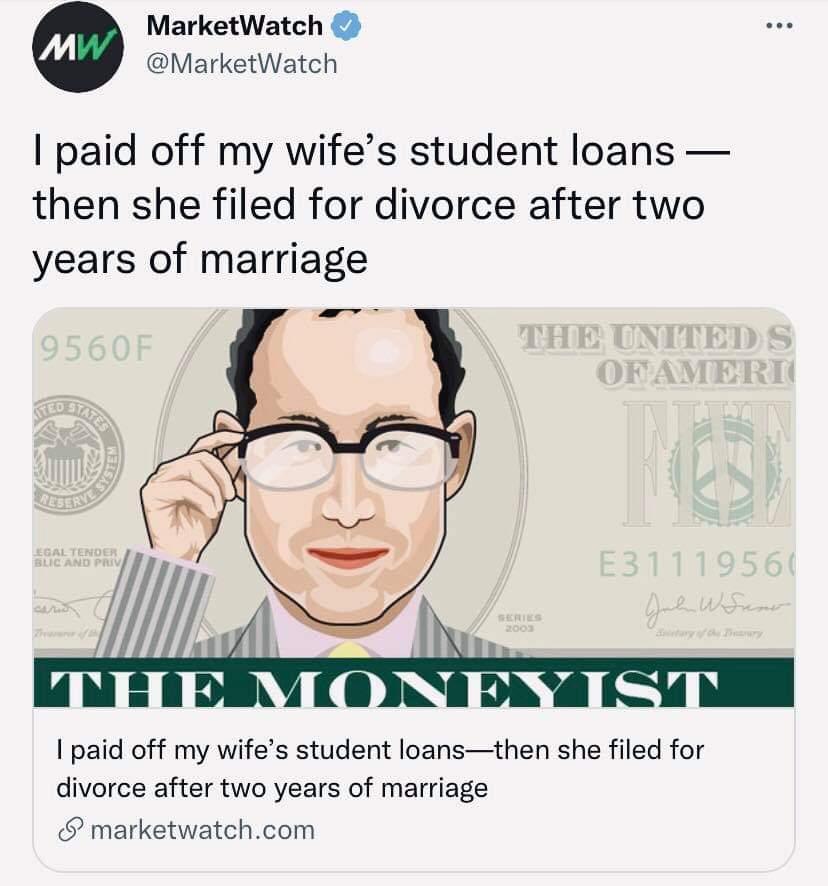 We don’t know how long they have been together just that they were married for 2 years and it’s hard to say if she owes him shit when we only have a one sided story. I too paid for my wife’s study even before we got married. And if she wants to follow a higher education than I will contribute towards that as well. Money comes and goes you can always earn more.. my wife is pregnant and if she were to leave me right now than the money I spend on her would be the least of my concern she can have every last dollar of our savings as long as I can be with our child. Life is too short to be angry about money especially not towards someone who you used to love and be intimate with. If he feels like he got played than he should blame himself, learn from his mistake and move on not cry about it and give his ex wife a bad reputation online

You are literally one of the biggest cucks I have ever seen. It's absolutely pathetic. I can tell you're giving this response because you know that women would want to hear it.

In this scenario where a woman scammed a guy and exploited him to get her debt paid off, you are worried that him telling other people about it is bad for her reputation. You literally cannot be more of a cuck than this.

Ben Dover is the perfect name for you too, lol.

Maybe we just have different values. No need to get so sensitive about it. Marriage to us is 2 families coming together it’s very disgraceful to divorce and for her to leave me must be because of a reason both our families would understand. Maybe you come from a background where divorcing people is normal and that’s why you feel like you have to be stingy towards your wife or maybe that’s just how you are. My wife will give me a child soon and you cannot measure the value of that with money no matter what I spend on her as long as she blesses me with children we will be equal. If that’s how you define being a cuck than I feel sorry for you.

I define a cuck as someone who looks at situation where a woman exploited a man to pay her debt for her, and you respond by being worried about her reputation for being outed as an amoral, garbage human being instead of rightfully casting the blame on her.

Also, she's not giving you a child, you cuck. It's a mutual experience. You are also "giving her a child". That is no excuse to willingly allow yourself to be exploited, or to constantly defend shitty women instead of calling them out for their shitty behavior.

Someone who willingly allows themselves to be exploited and does mental gymnastics to defend his own exploiter is definitely someone I would call a cuck. I don't feel sorry for you though. People like you are the reason women are so shitty. Because they not only lay down and accept being exploited, they defend women who exploit other people.

It’s so hard to read what you are saying like a child wrote this. You clearly have a issue when it comes to judging people before you even know them. You don’t know if she exploited him when you don’t even know their history together and just because you are stingy towards your wife doesn’t make other man that do care about their wives a cuck..

If her pay rises above yours there is an 80% chance she will file for divorce, oer the stats... go ahead and foot the bill for her, she will repay you with a divorce where you are left with all the debts.

She would rather spend more time raising a big family than at work. Not everyone values work to some woman spending time with their family is still more important but even if she wanted to get a better paid job I wish her the best of luck because in the end the money we both earn will go towards a better future for our children. Divorce itself is shameful and to divorcing someone over money is just disgraceful. It doesn’t even make sense to break up your own family because you are now earning a little more. I could always earn the money back but she would have to live with the shame of breaking up her family and our children now being brought up in a broken family just because she wanted a little more money. Not all woman are like that man just find yourself a decent one that still has some traditional values