TheDonald
Communities Topics Log In Sign Up
Sign In
Hot
All Posts
Settings
Win uses cookies, which are essential for the site to function. We don't want your data, nor do we share it with anyone. I accept.
DEFAULT COMMUNITIES • All General AskWin Funny Technology Animals Sports Gaming DIY Health Positive Privacy
699 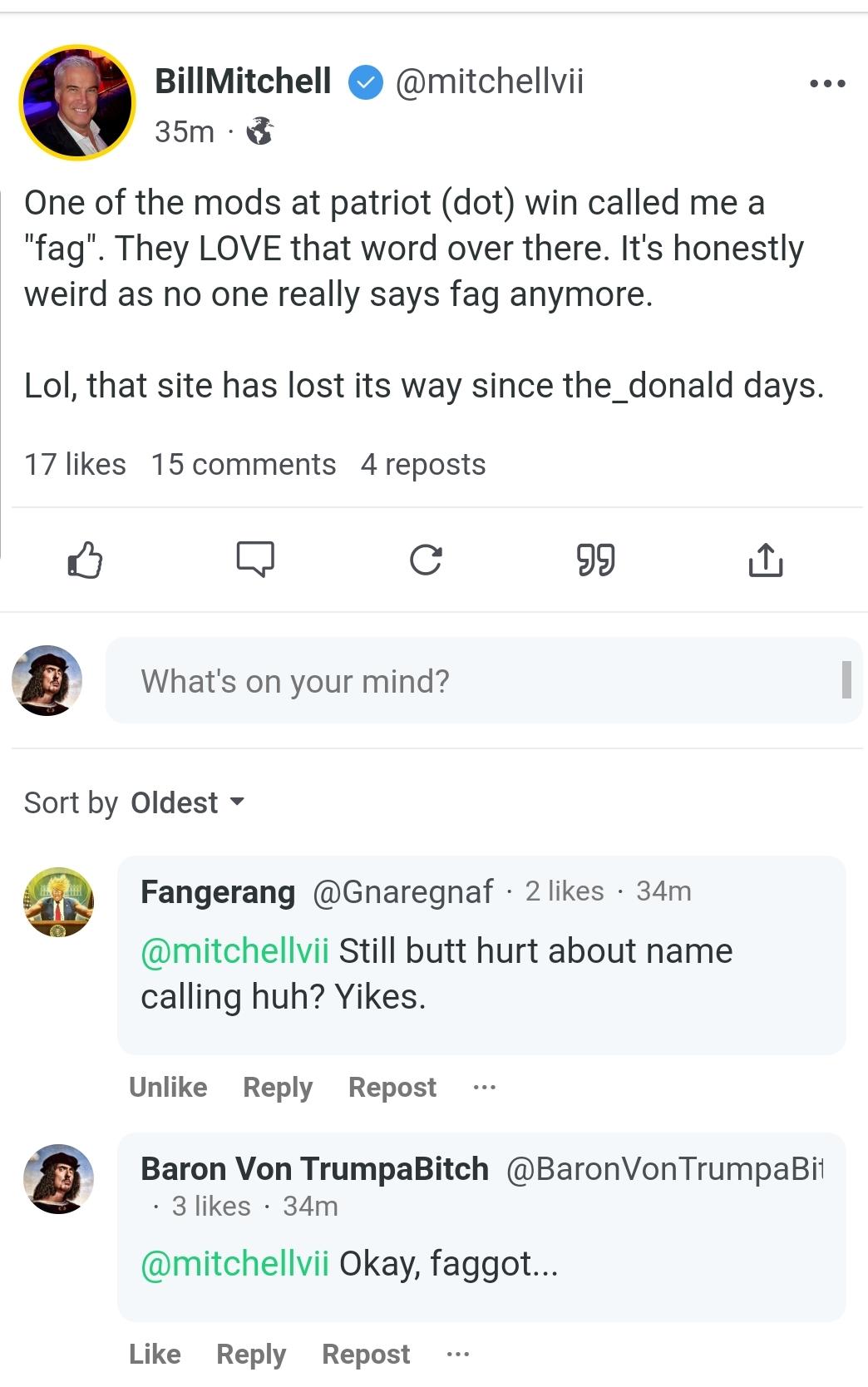 Lol at this faggot trying to make an appeal to seniority. People were calling you a faggot on TD way back when. I was there. Stop trying to act like you are an OG and above us. That attitude is what got you your faggot ass handed to you when you dropped in. Clueless boomer that still hasn't figured out how the internet works. Good luck with the donations, faggot.

I believe you but I don't remember him being mentioned anywhere before this year. I'm still not sure who he is.

I first heard him being mentioned a lot about 4 years ago, during the time when the Q stuff was really going strong. Everyone who posted about him seemed to take for granted that he was a big name, and since I'm completely clueless when it comes to conservative talk radio "personalities," I have no idea to what extent he was. My impression was that he was on par with some sort of radio version of Praying Medic, but aspiring to be the next Limbaugh, and that most of his audience were older and somewhat sheltered. There was a long lull, then his twats started to be shared all over the place again, especially here, after the coof hit, because a lot of his takes on it were pretty good, if a bit obvious. I don't think there's a single thing he's done, beyond commentate, tweet, and now that he's banned there, post things on gab. And collect money from those who should know better.

Just another grifter, like so, so many other on "our" side.

I remember being called faggot, and calling others faggot, back when T_D was still only at 50k subscribers. You are exactly right, fren. He wants people to think he's OG. Bill.....you were a faggot then and you're still a RINO GRIFTER FAGGOT now.

No one says fag anymore because you faggots have been conditioned to be bleeding heart cucks who, instead of shaming and ostracizing degenerate faggotry, have embraced it, encouraged it, and proliferated it such that it has thoroughly infected our whole society to the detriment of us all.

Ya know, I really think it pisses him off to have to wade through a Tsunami of posts calling him a fag or blowing up his opinions to find something he can pretend he thought of in order to have something to say.

What's old is new again... there are no new faggots under the sun.

Shill Bitchell is to dumb to understand how much fun we have, Boomer Neocons are faggots

You have to love that blue check mark weenies join and are easily outed as globohomos.

They can't help themselves.

Calling stupid things gay and gay people faggots has never gone out of style as far as I'm concerned.

No one says fag anymore. LOOOOL

Pedes, be a shame if you went to his Gab and called him a faggot in every fucking post. Real shame.

We're getting under his skin so bad I can feel his REEs through the interwebs. Light him the fuck up, boys.

Whoah. How strange to see myself in a post on here.

But yea he's still fuckin crying lol. What a faggot.

Yo. I'm the dude that called him a faggot (BaronVonTrumpaBitch). He's so triggered that he's guaranteed ten tons more of this. What an idiot...

It is better than it was as the_donald.

I just created scripts, bots and accounts to do this with Tim Pool and Fuentes on Gab. I'm going to include Bill towards the end.

I might have to join Twitter or Gab wherever this is from. Just to break this faggots balls.

Good ol' Billy Bitch-Tits over there seething like a lefty

Hey, Bill. You should be proud. Because of you the word faggot is making a comeback!

100% if I challenged him to a 1v1 duel he would be scared and decline he's a bitch faggot pussy. He is no man, he is but another fag

Nah bitch we still say faggot in the real world. You can tell this faggot hangs out in politically correct circles.

We haven't lost our way. We stopped being enslaved to Reddit's rules.

Cornhole plugger, this guy. He probably makes Fruit of the Loom stew for Thanksgiving.

This was funny and time appropriate.

Are you posting this just so we call you the F word? If your that hard up I'll help you out, Faggot

I disagree, this gets funnier the longer he complains about it