TheDonald
Communities Topics Log In Sign Up
Sign In
Hot
All Posts
Settings
Win uses cookies, which are essential for the site to function. We don't want your data, nor do we share it with anyone. I accept.
DEFAULT COMMUNITIES • All General AskWin Funny Technology Animals Sports Gaming DIY Health Positive Privacy
2428 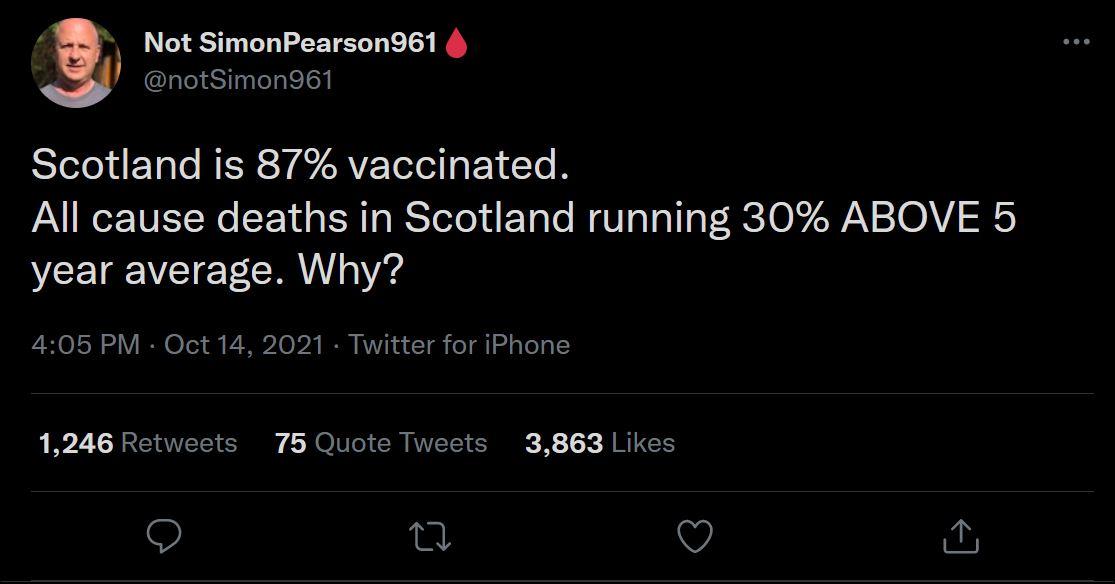 It's the sudden wave of deaths of people dying of myocarditis while driving. But in general it's meant to describe the overall health decline and sudden deaths of vaccinated people. Red deer is essentially the culminating negative health effects of the vax accelerating into its final form.

Based medical professionals have already been saying that from a few months to 2 years after the vax, there will be mass health issues and mass death in the vaxed who manage to not die within the first 2 weeks of taking the vax. It's not just going to be blood clots and heart attacks. It's going to be a whole range of issues that will overwhelm the worlds medical systems. It's like how after we bombed Japan, they didn't even have enough resources and doctors to deal with even a fraction of the survivors, and for many they could do nothing, not even make them comfortable while dying.

Which is also being ignored/buried by media and governments around the world, even though red flags are soo obvious that governments of the world should be declaring national health emergencies and immediate bans on the vax, it's not happening. It's like that scene in lord of the rings where all the warning beacons were lit.....except they're being deliberately kept from being lit.

We are in for a world where mass unnatural death is becoming common place, and ignored as if it isn't happening. It will become the new normal. This is how depopulation extermination works. First a few here and there, then a few more, and a few more, until you're either dead already or walking around realizing that you don't see as many people as you used to.

It's easy to walk into a grocery store with 1/10th of the people or drive down an empty road that is usually busy, and think "Hmm...must be a slow day". Only it's not because it's a slow day.

Deagel predicted this 6 years ago:

Since they received many questions about why they made such a forecast, the fine print contains bullshit about how the Western economic system is going to collapse and then Americans and Canadians are going to migrate to South America and Asia and whatnot. This is bullshit, you can see their forecast populations for South and Central American countries do not even increase.

They made this prediction with knowledge of the plan we're seeing unfold today.

Feel free to peruse the pages and note the countries with the largest population reductions. It turns out it's all rich countries with a high standard of living, mostly white. Countries like China, Nigeria or Brazil are unaffected, but all affluent countries are being hit hard.

This is white genocide. Or maybe Maurice Strong can explain what it is:

Before the plandemic became official I had this gut feeling that what was going to unfold was only preparation for something big to follow after. It's now crystal clear that the stage has been set for a real plague to dwarf the Black Plague. hundreds of millions of human beings all over the world have had their RNA centralized so that if and when any person finds a way to harm and or modify that specific RNA structure they can wipe out millions with a single biological attack. One of the only reasons humans have lived for so long is because they possess extreme genetic diversity. Look up crop decentralization and the Irish famine, the same thing is now possible with entire cities.

If you're interested in additional insight into the topic look up my comments from 12 days ago, not everything is what it seems.

People have pointed out that past pandemics - real or fake - have only ended in war or economic devastation. We will see.

Would love to see proof of this, only examples I can think of are opposite. 1918 Flu started in war and ended in economic prosperity. Black plague created middle class.

Well, it's not exactly accurate. It's hard to describe the years between the wars, right at the tail the Spanish flu, as affluent. The Black Plague came to an end at 1353. It's commonly thought that the modern middle class hailed from the Calvinist movement, which emerged around 1550.

That’s a good point. Can’t remember where I read that. Either way…this isn’t a real pandemic so it’s not going to follow any historic pattern unless it becomes communism. Then we all know what happens next.

You're characterizing the slow motion economic collapse leading from one world war from the next as economic prosperity. Might lose the audience leading with that claim.

hundreds of millions of human beings all over the world have had their RNA centralized so that if and when any person finds a way to harm and or modify that specific RNA structure they can wipe out millions with a single biological attack.

This comment tells me that you don't understand RNA or its role in the body.

Humans, in their current iterations, have been around perhaps 300,000. That spell of time is considered a fleeting moment for a species. Interestinglt, when a species is the last of its family line (in our case, Homo sapiens is the only extant Hominina), its days are numbered. Doesn't bode well for us.

Dad, why do dogs look so different?

"Because of their breed, son"

Why are some so big and some so small?

"Their genes, of course."

And why are some clever, and others not?

Tell us more about this RNA centralization process Dr. Salk

Maybe it has something to do with block-chain watermarks on the ballots, lol.

I know what you're trying to say and my argument is the exact opposite: the human genome project maps every single gene, but you only need limited vulnerability to compromise the immune system. Viruses are the most obvious example of how easy it is to engineer a virus capable of defeating not only vulnerable immune systems, but healthy ones as well. The same thing can happen to people because if they can find out what's in the universally administered shots they know exactly what's inside millions of people's bodies. This has never been the case before in human history.

On the small chance you were serious I was merely talking about the Irish famine destroying potato crops because of a lack of biodiversity among the species of plants but I figure you aren't.

I obviously don't have enough PhDs. Because I have no idea what you are saying. I'm not trying to fight. Just understand.

There's ton of things that are in everyone in similar enough forms already. You don't need mass RNA injection to accomplish that.

The more. Concerning thing to me is that they now have the right to ordered scheduled mandatory injections that will create whatever protien they want to do whatever they want in the future.

That is the first shots could indeed be harmless, useful or mildly either way. But if they add RNA for anything they want to do to later injections you'd have no way of knowing. It would look the same as the rest of the vax batches chemically and the only way to detect be expensive reverse sequencing of that batch... maybe

Are you suggesting they set up a ligand to bind and trigger later ? Or a planned viral vulnerablity somehow. It's a big claim and require extraordinary evidence. But anything is possible. They have literally been granted dominion over your bodies.

they can even launch diseases that feed into existing drug co-products.

Yeah that one, let me know what you think even if you think it's BS.

I was with u til the last sentence lol. If ur saying more than half the people are gonna be missing, you'll know from your friends and family before you notice supermarket traffic I would think.

Not if your friends and family are based too.

not if you're a loner somewhere in Alaska... you'll be like: "wait, they finally solved chemtrails? wow, we're making progress as a civilization of 8 billion people"

narrator will be like: "what a sweet summer child"

Depends on where you are. Some of the villages have a vaccination rate as high as 100% (allegedly).

Here's my problem with this hypothesis:: We deplorable & heavily armed Bible clingers become the survivors in the elite's Brave New World. I can't imagine we are who the elites want around in their commie utopia.

Except Trump was used to push it on us, and we were too smart and it backfired on them and only the idiots on their side took it and now they’re resorting to authoritarianism to force us to take it

I'm sure there's phases. But you do need an underclass of hard workers to support the elites. They won't really find that among those they politically pander to. When their institutions are the only remnants of civilization left to huddle around, at that point politics take a backseat for both those at the top and the bottom. I mean if you have 1 billion people left on the planet, are they going to be as environmental focused? Probably not, because they will have made less people exist, so consumption would take a drastic dip.