TheDonald
Communities Topics Log In Sign Up
Sign In
Hot
All Posts
Settings
Win uses cookies, which are essential for the site to function. We don't want your data, nor do we share it with anyone. I accept.
DEFAULT COMMUNITIES • All General AskWin Funny Technology Animals Sports Gaming DIY Health Positive Privacy
2333 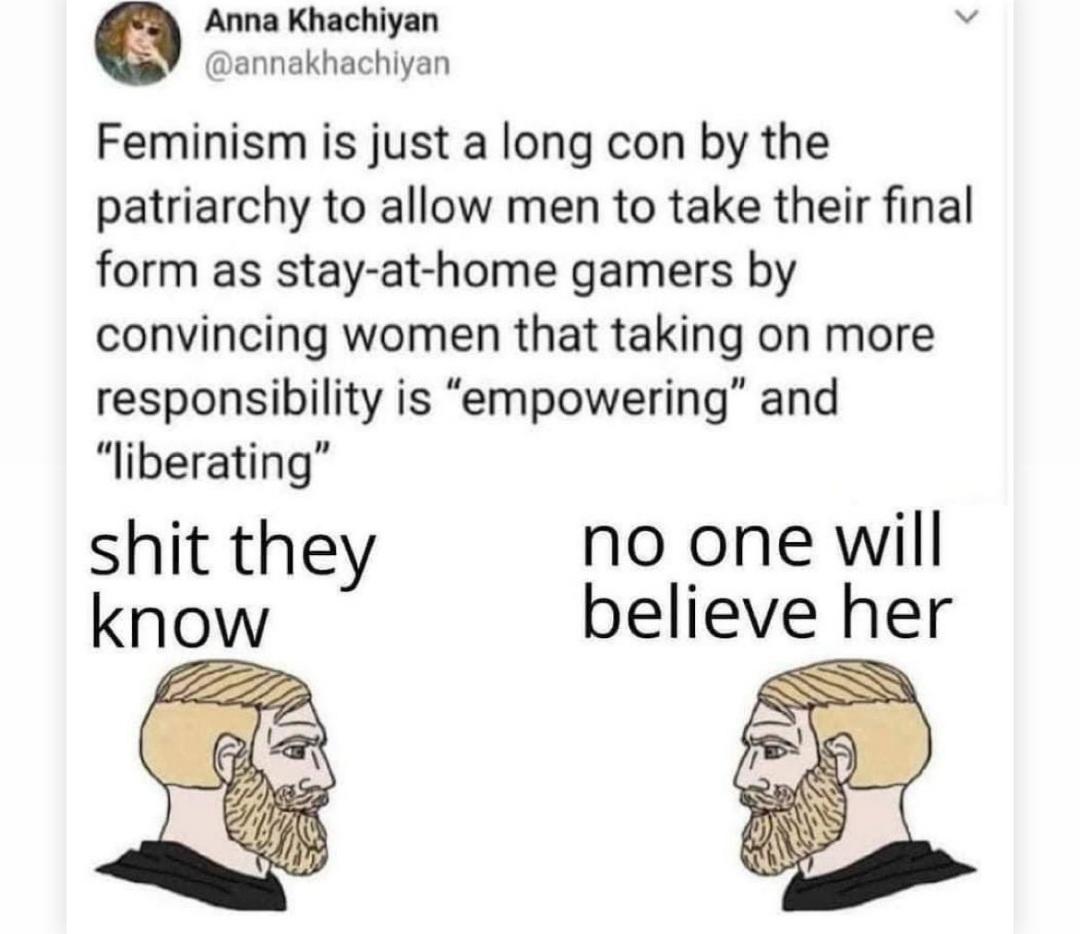 I gotta say, for men hitting 30 the outrageous amount of testosterone driving you to think women are the top priority and your reason for existence in life really goes away. It's gotta be one of the best things to ever happen as a man.

I'm in shape with a career and money to spend, still have the ability to have sex when the moment is there, but my mind has finally stopped giving a fuck about anything besides family, myself, and shit I like to do.

Bonus being that if I feel the need to risk half my shit in order to have a family and child (given a family-oriented female still exists) I have an entire decade to do that in my prime and can probably still manage it after that.

Feminism really screwed women by turning the cards on them. It's caused them to exploit the advantage they have in their youth on themselves rather than on shit that matters. They treat young men pretty terribly and ruin their own lives while doing it.

When each sex reaches their 30s, those extremes completely invert. That has always happened throughout time, however it was still pretty evened out with family values and traditional norms because each sex valued one another. Now, once the 30s hit, feminist women are in a hole they can't get out of, aren't attractive by any standards, and men have a ridiculous amount of value they've never experienced before, but no reason to give it to anyone else.

To the diversity experts, straight white men have always had an instinctive advantage to innovate and survive, probably from ancestors living in harsh / cold environments that required it. That's why they were able to sail across seas and build everything from nothing, win nearly every war unless against one another, etc. Then you have entire continents like Africa that are the oldest continents, have had helping hands for hundreds of years, and still can't dig out of their rut.

The more bashing of straight white men everyone does, the worse the backlash is gonna be when the pendulum swings back, hence Nazi Germany, crusades, etc. Men will survive no matter what. All this bullshit has done is destroy women and minorities as individuals, making the rest of us aware of their true nature.

Damn, pede. I’ll admit you didn’t have me at first with that first half, but you knocked it out of the park with the second half.

Some cultures are better than others, which is why the oldest continent can’t dig themselves out of their rut. Sometimes those are a genetic dead-end, and if we had the stomach for it we would just let them go.

It’s an ugly, harsh, and non-empathetic way to look at it, but it’s a truth everyone knows.

It’s almost as if Western culture is nearing this point. That the pervasiveness of sub-cultures like Feminism is leading us to what could be likened to a genetic dead-end. I’m in your situation. Career, or at least good trajectory since they’re going to fire me soon for being pure-blood, decently healthy, and I only care about shit I wanna do/promote. Why would I take the risk of letting someone have access to that, and could potentially undermine it? Why would I go for the mid 20s woman (who still retains all the attractive strengths of her age) who doesn’t think much more of me than a wallet, or access to better men?

So, I say all of that to say, that maybe that’s the point? We are currently undergoing the largest psyop in the history of our species, after all.

White western culture is in no way a genetic dead end. These subversions are foisted upon us by one particular group who appears to be like us, but aren't, and will proclaim they are if their White looks get them in trouble with the golems they lead around. Their end goal is to turn us into a genetic dead end by any means necessary: sterility, diversion, and hybridization with others who are genetic dead ends. Once they do that, they can rule over who's left, treating them as their go-- err, I mean cattle.

Right, that’s more in line with what I meant. We have a bunch of subversive sub cultures that are propelling us towards that genetic dead end.

It’s artificial. The West looks like it is in decline, and it’s being done on purpose by the globalist elites to have a much smaller number of tax cattle they can control.

The thing that bothers me is what do we do about it? What can I do about it? I know a few die hard, atheistic, feminists who won’t even consider getting married or having children. Mid 20s, and already had a hysterectomy kind of die hard feminists.

Ideologies that get into people at young ages that ruin them aren’t things that should be promoted, but they are by just about every institution in the country/world. People who can just shit a cool billion to fund whatever they want.

So many people refuse to even acknowledge they exist. It’s very frustrating.

And now you see why they're trying to breed us out. If you can't beat 'em in combat or competition, subvert their bloodlines. We'll see how bad it gets.

Thanks for commenting this on my post. Saved, thought its the same thoughts I've had, you expanded and wrote it down. Love it.

Spot on. There’s nothing in Africa that ever forced them to innovate.