TheDonald
Communities Topics Log In Sign Up
Sign In
Hot
All Posts
Settings
Win uses cookies, which are essential for the site to function. We don't want your data, nor do we share it with anyone. I accept.
DEFAULT COMMUNITIES • All General AskWin Funny Technology Animals Sports Gaming DIY Health Positive Privacy
3365 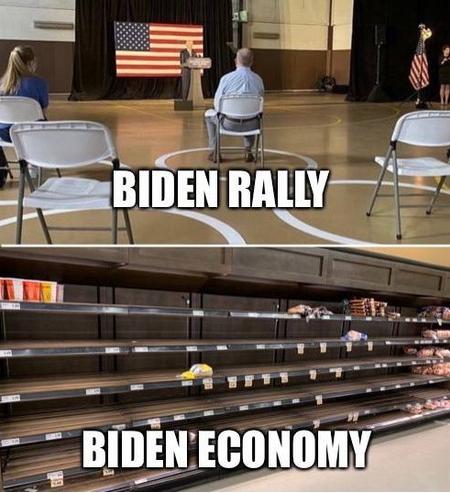 He said "build back better" not "restock inventory"

Reposting what I said elsewhere.

This didn't happen until Biden was in office.

This wouldn't have happened if Trump was still president.

He would know what to do.

Things like supply chain issues don't just happen in economics. They're caused because someone at the top fucked up royally. That's Econ 101.

I'll admit I'm an armchair economist. I'm sure there are some real ones on here. But how can something like this just happen when everything was fine when Trump was in office?

It can't. I'm no economist either, but you don't need to be one. This is calculated. The shortages are on purpose. They even tell you, there will be worse shortages unless everyone gets vaccinated.

This is an attack against the people by their government for challenging the powerful.

Edit: I also want to point out that even if everyone got vaccinated, it wouldn't end. Biden has even said he wants to see 97-98% vaccinated. That will NEVER happen, ever. It's an impossible goal. And that's on purpose.

THIS. This a million times. The commie-globalists have become so overconfident they are making proclamations that directly incriminate themselves.

"Shortages will worsen until everyone is vaccinated" For fucks sake. a) WHY, and b) by showing you are certain of that, you show YOU are the one creating the shortages.

"We want 97-98% vaccinated." Go on, say it, You want 100% don't you. Just not quite able to bring yourself to reveal your full maniacle lunacy, and think backing off by 3% makes you look reasonable. FUCK YOU BIDEN. And the Belgian secret society or whatever you rode in on.

Yeah, it seems impossible to me that someone can take what was the strongest economy in human history and turn it into energy and supply shortages in less than a year unless they are actively trying to destroy it.

Empty spaces for the empty brain regime seems about right.

And yet they pulled it off. Let that sink in.

Empty brain regime? How about most successful Anti-American regime in US history? Obummer only dreamed of doing this much damage this quickly. Biden's handlers are making NO mistakes because this is 1000 percent planned.

Only thing left is circus peanuts and rye bread 🤢

You’ve never had a big tent fluffer nutter on rye?

I'm not upvoting this only because it should say Fuck Joe Biden.

Stop with the LGB crap.

I read a YouTube comment today from someone who heard LGB was a dog whistle for white supremacy… whatever in the fuck that means?

Everything is a dog whistle for white supremacy to these people.

Gayest most retardedest defense of this shit ever. Sadly, it's the #1 go to

Downvoted for being a homosexual.

You're a handshake bitch lol. Fuck outta here with that "you sound like" shit. You ARE a shill doing exactly what you accused me of you leftist faggot

Hmm. Weird how you're so focused on persuasion. Strange indeed

I wore a Let's Go Brandon t-shirt to a rally on Saturday and it was universally celebrated. Only 2-3 people didn't know what it meant and they all cracked up when I told them the backstory.

FJB in every scene.

Let's Go Brandon is a banned phrase on Canadian television. That's how powerful it's gotten.

It's not, but I don't think 81 million votes is either.

All we need is a "t" and LGB becomes LGBT and watch heads explode...

I'm thinking a shirt that says something like " LGB-Tee (shirt)" on it, maybe?

Yup. But look the shelves are sold out- Libs

All the poor people are hurting from the price increases. That must mean his economic plan is working! And don't give me any of that it's Trump's fault bullshit. I don't believe in coincidences. Oh it just so happened prices started getting lower after Trump took power from Obummer, and now just so happens the prices are going back up again since Obiden illegitimately was seated in the executive branch? LoOk GuYs! I've got a brain hemorrhage, that must mean the Covid vaccine is working! Look guys middle class people are hurting now more than ever as a direct result of Obiden's dictatorial orders and administration!

Most popular president in American history, though, bigots!

“Why do the store shelves look like a a Biden rally?”

Can you guys literally STOP with this pathetic "Brandon" shit?? Grow a spine and NAME Biden! Quit being passive aggressive wimps. You act like you're living in North Korea. When the losers screamed "Drumph", at least the normies knew who they were talking about. Your "Brandon" message is completely lost on everyone not in the loop and surfing the internet on the day that story popped up before disappearing. I see people all the time asking what that even means, and that means there are many more not bothering to ask.

You people are literally losing the normies over the sake of your tired little in-joke. This is the time when everyone needs to hear you're disgruntled with BIDEN.

Managed decline of the USA…. We need to call out Obama and others just as much if not more than this senile prick frontman in the whitehouse

one of the people at the rally is a reporter

I think we need to start calling it The Brandon Administration

I think we need to change FUCK JOE BIDEN at every opportunity.

The guy in the blue shirt is actually dead. He made a shiv out of a plastic spork and stuck it in his eye.

Bullshit. No way there were that many people.

"Need a restock of Parmesan on aisle 5"

It's the same picture

Sheeesh! How the hell have we fallen this far in 8 months? Will there even be a country left after 4 years of this?

The Globetrotters actually did put some circles like that on the court, for their four point shot.

I think Walmart is trying to look good.. I went yesterday, and they had pulled pallets of unopened boxes of goods onto the store floor. They then left them there.. and have been there a few days. Either 1: they are trying to make people they have a surplus of supplies, or 2: they don't have enough employees to put everything away. None of the pallets had food, it was only everything else in the store.

Saw a lone Let’s Go Brandon sign on the side of 680 while driving to Davis. Fake news, fake polls and fake elections make it seem that there are more of them than there are of us but it’s not true. WE are the true majority.

We tried communism, with "stimulus" payments to all Americans, and people getting paid more to stay home than to work.

Now the shelves are empty.

This happened in the Soviet Union in the 1950's. It did not end well. Starvation. Gulags.