TheDonald
Communities Topics Log In Sign Up
Sign In
Hot
All Posts
Settings
Win uses cookies, which are essential for the site to function. We don't want your data, nor do we share it with anyone. I accept.
DEFAULT COMMUNITIES • All General AskWin Funny Technology Animals Sports Gaming DIY Health Positive Privacy
4198 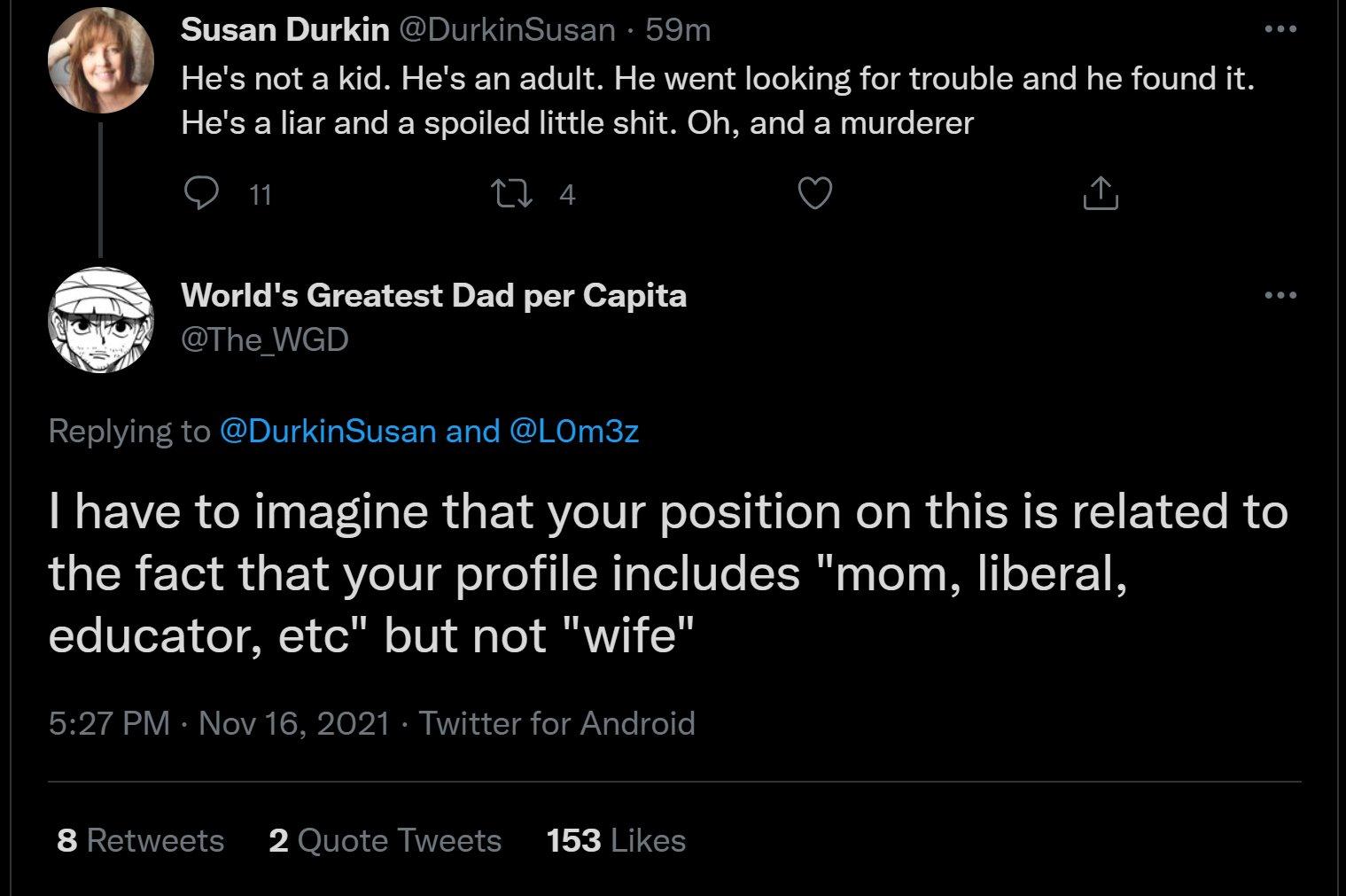 One could almost say they fucked around and found out.

I can feel the heat from here.

Bet she thinks all the kids she 'educates' are spoiled little shits.

Bet she thinks all the kids she 'educates' are spoiled little shits.

Only the white ones.

Bingo. What exactly does that even have shit to do with anything? Being spoiled? And it’s a strange word to use to describe someone you’re trying portray as a hardened adult criminal. It’s like she knows she’s lying and contradicts her own argument by subconsciously labeling him the way she would a child while calling him an adult in the same breath.

She thinks a 17 year old is a grown adult. What a clown

pedo she is a pedo too.

And they grow future serial killers.

No no, let them call themselves educators. I want to know who are teachers and who are propagandists. If they are nice enough to announce it, all the better

They usually display many of visual indicators. Or you can just bring up Trump or ask of vaccines are correlated to myocarditis. They will start foaming at the mouth.

I’d much prefer teachers be professionals in their respective fields. I want a mathematician who can teach to teach mathematics. I don’t want a teacher who has an understanding of mathematics to teach mathematics because they really just end up teaching what they know; Education. We all know that Teacher Education is pretty much just Cultural Marxism and Post Modernism at this point.

Teachers become teaches because of the teacher lifestyle. They want all the time off, benefits, and the great pay.

Most of them don't want to work nonstop and want summers off.

Thank you for mentioing "great pay". Because of the perverse incentives in public union contracting, "Educators" get very good pay and benefits for their PART-TIME JOBS. Yet the unrelenting media message is that they are underpaid.

Please repeat whenever possible, "Teachers are OVERPAID for their PART-TIME JOBS".

They get a lot for what they put into it.

Being able to teach subjects that are difficult for some students also involves some attributes that don't really have to do with whether someone is a professional in their field or has some degree in education. I've seen both kinds completely flail at explaining things so that kids could understand. Not that it hurts in any way to be someone that has worked outside of education in that field. These people are usually better just because they recognize when they are not reaching the kids. They will work to get better or just get out. "Educators", on the other hand, just rationalize their failure and dumb things down or keep looking for the new education fad that will finally work.

Oh for sure, that professional also needs to be a good teacher. Computer Science in college was just about the most painful experience I’ve ever had in school. Indian professors with accents so thick you couldn’t understand a single word they said. Engineers with negative levels of charisma but brilliance in their field.

I think that to a great degree the reason we’ve seen teaching as a profession pivot as it has in the last century is because the family unit has been corrupted to a degree that it is unable to demonstrate core human competencies on a moral and civic level to children. So it has fallen to the state. Meaning “educators” are more the state’s attempt at a simulacrum of a parent than anything.

I was in the education field and came across so many pretentious fucks. They think they are God's gift.

Which is why ever last PHD in education absolutely insists that you call them Doctor.

Yeah he's white. All white people are spoiled ya know.

He spends his time doing Police and Firefighter cadet stuff, getting First Aid certified, and working as a lifeguard, where is she getting "spoiled" out of that? Oh, and cleaning up graffiti left by rioters. I'm also wondering where the liar bit came from?

The crying most likely. They’ve decided that it was fake and not an instance of PTSD related to retelling the story of killing a man.

Yup I thought the same exact thing. The only thing I can figure is that it’s her own subconscious way of telling us she doesn’t believe her own words when trying to insist he’s an adult.

She calls him and adult and then completely contradicts that by referring to him as a spoiled little shit, which you’d most typically say about a child.

in this case, roastie projection as well

Roastie is probably dripping thinking of the Kenosha Kid looking for trouble in her pants. There is a thin line between love and hate.

Fucking A this couldn’t be more true. The men in her circle are most likely all low-value chuds, hiding behind the noble “educator” title. She pretends to respect them, but she doesn’t really view them as men. She reacts to Alphas by outwardly expressing disdain, probably because she knows they aren’t attracted to her old, harpy, entitled ass. But we all know the truth about how she really feels…

Isnt that the same argument faggots use to curb dissent? If you talk bad about fags you're secretly in the closet?

Any woman who harps on one of our guys is secretly wet for him?

Your logic would imply that anyone who talks bad about commies is secretly a commie. We know that isn’t true, so your theory is busted. It’s obvious, given her circumstances, that she has few, if any, alphas around her. She is lying in order to virtue signal, or maybe just to lie to herself, because she is obviously the type of woman that strong males have minimal attraction to. Its a defense mechanism she has developed over the many disappointing years of her adult life.

Joseph Rosenbaum was an adult. He went looking for trouble and he found it. He was a pedophile and mentally deranged.

I hate people with this arguent. He was not an adult the time it happened. He legally became an adult after the events he's on trial for. All these fucking liberal assholes who comment on this trial are so ignorant. I can tell none of them, like this bitch, have bothered watching ANY of the trial. They just listen to MSM lies about the trial.

that's why I cut people out of my life and I dont miss them one bit. I have a job, yet I'm awake. I somehow manage to not believe obvious lies. The fuck is wrong w these casual observers? So sure of themselves, but can't even make a single succinct point.

I don't want stupid people around me anymore no matter how hot or helpful they are. I am slowly filling my time back up w American friends. Not filthy communists. Fuck them. They can all die fat and alone and have cats eat their face.

If anything, the belief that he could help at Kenosha revealed a certain amount of naivete and inexperience that you would only find among less mature, or perhaps less cynical, people.

He was helping fucktard. Until Antifa decided to start shit. FOUND THE CLUELESS FUCKiNG IDIOT.

Jesus taught that you could recognize a tree by the fruit it bore.

Reread your post and think about what it says about the author.

WAHMEN have had their fun in the sun playing role reversal for the past several decades and now the world is a total goddamn shitshow as a result. Time for men to make a comeback.

This is another example of why I left the left. It's when I realized just how much they don't care about anything other than control, even if it's not actually them that gets it (peasants get peanuts).

These leftists have turned politics into a sport. It's not about morals, values, or principles. It's simply about winning. It doesn't take too much to realize why they are this way. They're mostly childless, unaccomplished, mentally ill "people". This shit fills the void in their life. They fantasied about having a six figure income after getting their useless liberal arts degree, but were left with a $15/hour job that even a high school dropout can do. They have nothing going for them other than their sense of moral superiority.

Don't forget, you couldn't even as much as criticize Obama's "kids" or you'd be hit with a flurry of hate from the left

It’s encouraging to see this. Perhaps young men like this one will answer the call to place Freedom above Health and Safety.

Oof! Pray for her children. Yikes!

Kyle: not a kid

How does this classification system work, exactly?

If he wanted to shoot child molesters and rapists he would’ve racked up more than 3. His discipline with his friend’s rifle makes that fact plain to me.

She’s not a roastie bruh, she’s a floppy.

Dude... I have never actually watched the entire video... lmfao 🤪 when they are literally sitting on the ground, suites covered in dirt - still balancing the casket on their shoulders!!! Top Tier right there. Ps there is 40 PA columns stacked in the background.

She dressed provocatively and went looking for dick and found it. She’s a spoiled little shit and deserved it.

So if Kyle is proven innocent, he should sue this bitch

Watch Kevin Samuels. Puts women in check, opens a few female eyes to their wicked indoctrination of whoreness and gold-digging.

I’d ask her what her opinion is on a woman wearing a short skirt at night who gets raped went looking for trouble and found it.

Face it, Susan - Tyrone is not coming back.

Wasn't she a Calvin & Hobbes character?

She just described the entire Biden family and projected it on an innocent young man.

My take is that she's not an "educator" either - she's an indoctrinator. I don't call them teachers anymore.

I have to conclude that it's none of her business and nobody gives a rats ass about her damned opinion.

He wasn't an adult at the time, you twat.

Susan Durkin looks like she is a carrier if multiple STD's.

KEK!! She must be a crooser