TheDonald
Communities Topics Log In Sign Up
Sign In
Hot
All Posts
Settings
Win uses cookies, which are essential for the site to function. We don't want your data, nor do we share it with anyone. I accept.
DEFAULT COMMUNITIES • All General AskWin Funny Technology Animals Sports Gaming DIY Health Positive Privacy
3102 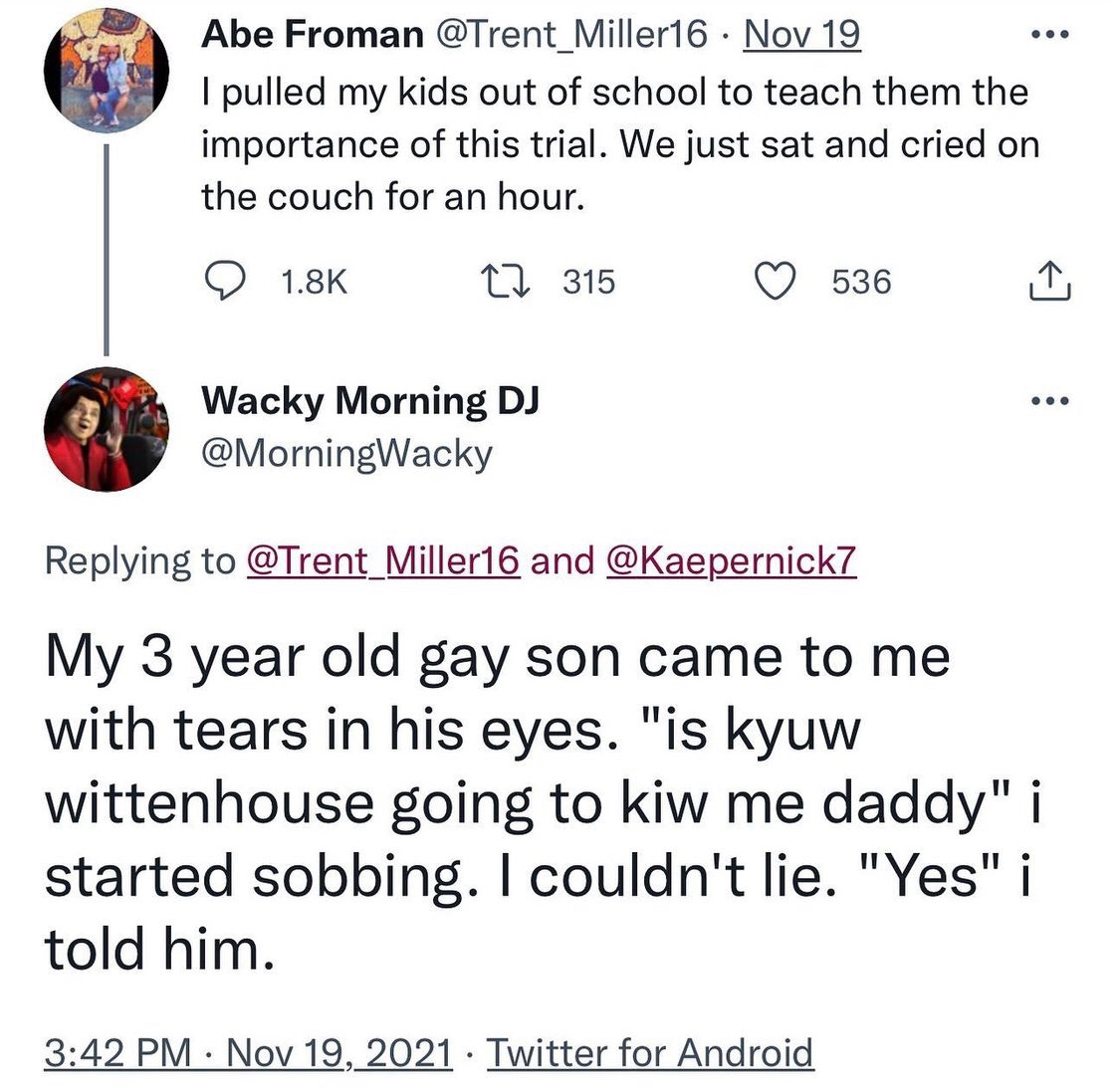 Mock them until they cry and then mock them for crying. This is the way.

I un uptrumped it so I could uptrump it again

I cried, too. With laughter.

Count every vote or the ghost of Rosa Parks will cry!

Those aren't her tears; she's just re-enacting a young girl's tears because she plays better to a liberal jury.

Impossible, it's not 4am!

I always downvote first so that my upvote counts for 2.

Not to child fuckers , and their communist comrades .

"They are destroying our Democracy" said the demons to the unaware.

Your lack of understanding of the level of stupidity that some of your peers can contain is lacking.

Its “gay 3 year old”…. No kyle killed one of its heros… a child ass rapist so of course they cried for an hour

There isn't any such thing as a gay 3 year old. If anybody claims their 3 year old is gay its a safe assumption that they are a pedophile and have sexually abused their child.

Right? A 3 year old has literally 0 concept of sexuality or sexual desire. They just want to play with toy cars and hide and seek.

Sausage king. Because he’s faggot. Get it?

Break them. Then break them again. This is how we deprogram the conditioning.

The second one anyways. The first one probably just a lie.

It's getting harder and harder to tell nowadays.

Abe Froman is a fictional name from Ferris Buellers Day Off, this entire thing is fictional, but t still funny!

He's the sausage king of Chicago

There's a hotdog/bratwurst style restaurant I know that has one called the Abe Froman.

Wasn’t it on the menu at Hot Doug’s? I thought he closed up shop years ago.

There's a local chain called Dog Haus. It's pretty good they use the king hawaiian bread. I can't think of that bread anymore without Hawaii Judge coming to my mind tho

And devastatingly handsome if I recall

Searched for this, was not disappointed,

I thought it was real. Shrug

It's formatted as a riff of a previous 'real' fake comment from some Trump Derangement propagandist, circa 2017. From a running series of them, actually, .. milking it until the mockery pushback gained traction.

The elements were always the same: young child, scared, 'tears in their eyes', incredulously asking some political question that's 15 years over their heads --

'My 5 yr old son just came up to me, with tears in his eyes, asking if Trump's overly-exuberant tightening of multilateral foreign exchange policy could trigger World War III. I had no choice but to tell him Yes. We just sat on the couch together, and cried.' -- etc.

Still, some Kyle John wick memes popped in my head and cannot be unseen.

I hope. I almost hurt my brain.

I pulled my 2 year old trans son out of college, and told him Kywill killed Jesus, wait I don't have a son, and then I cried.

My grandchildren are terrified to go back to grade school. I had to be honest with them. Yes, Kyle will rape all of you with his big scary assault rifle and then stomp your skulls. Big bad meany.

So you got a free trans kid? Well .. not exactly free. I mean .. you got a trans kid for free .. lol. Hilldawg be comin to collect on that debt bruh.

These Twitter posts should be satire. 3 year old gay son? A 3 year old is a blank slate. That poor child

I think that is a troll

I just don’t even know anymore

I think when he told his 3 year old that yes, in fact, Kyle was going to kill him, that proved it was a troll.

I believe it, but honestly it’s hard to tell these days. Years ago, I would have immediately thought “joke”… today’s world.. who even knows anymore

I think we’ve all seen way worse from retards that are actually shilling that garbage.

The reply is satire. https://twitter.com/MorningWacky

It’s actually so much mocking, that it could be real.

Exactly! Besides that, what sort of sick individuals talk to 3 year olds about a trial?

The reply is mo king these ridiculous made up stories.

No wonder he's the Sausage King of Chicago.

My 2 week old son walked up to me earlier this morning with tears in his eyes, and asked me why its ok for a white supremacist to kill innocent white criminals that were only trying to kill him first and then started sobbing as he chanted black lives matter over and over while holding his Colin kaepernick blanky

Open those mental hospitals back up.

Abe Froman is a character name from Ferris Buellers Day Off

First off, you pulled your kids out of school for this? How did you know the verdict would be read that day? Unless you’re telling stories....

Second, stop raising soft kids. My oldest’s reaction to the verdict: “let’s go! Take me to the range so I can learn to be like him”

A quick call to childrens social services would be the best route for these children....

That Wacky Morning DJ goes on (in that thread) to claim that the minor attracted person (PEDO) that was killed (Rosenblum) was her gay son's babysitter. Her son is 3. She also talks about how Rosenbaum fucked her son. If that account isn't a parody, that bitch is so fucked in the head. Joke or not, disgusting fuck.

It’s just a bait meme. Like “draft our daughters”, gotta see how far the left will go to defend the logical ends to their ideology

A few weeks ago the idea was floated in DC to draft women.

These have to be parody accounts.

That DJ post has to be a shitpost. I can't tell clown world from real life anymore.

Not sure which post was satire. Clown world is getting confusing

Said no three year old ever. How fucking DUMB.

Well, I'm sure these cucks were crying for a different reason, but I cried at the verdict. And every time I re-watched it, commentary or no. Hell, I'm misty eyed right now thinking about it. Here we have a young man, a goddamn hero, drug through the process of getting ANALY raped by the state and it comes down to 12 people that statistically 3-5 were gonna want to fry the kid.

Call it what you want, but yeah, I cried like a little bitch, and I'm damn proud of it.

I'm 7 months pregnant and my non binary, gender fluids are running down my leg. My clump of cells is coming two full months early because it feels like it is drowning in the womb over this atrocity of a verdict.

Every day, the legend of the Kenosha Kid grows stronger.

No matter what happen, he now lives on as Myth Immortal.

Oh man I just went back and read it again.

Social media isn't real, and the people on it don't have voices in real life because they are worthless.

The disturbing thing is that some gay dude has "kids"...

DEFAX will soon be involved I'm sure... or maybe they already were...

I do believe Wacky Morning DJ is a goof account. Guy's profile picture is Succotash from Xavier Renegade Angel. Seriously check it out. Just be warned though the first season is....it's fuckin' drugs kids. Like "Holy shit I feel like I smoked a bong and did hard black tar heroin.".

That's nothing, I was at a baseball game and my 2 year old non-binary deerkin son told me he doesn't live in a country where racist white supremacist laws continue to be the norm. He said he would vow to become president and make things better. Then the entire stadium erupted into cheers and a multi colored group of doves flew in the air.

Someone tell me the 2nd tweet was parody or sarcasm?

Fuck all that shit, I'll start referring to my daughter as my 4 year old super-straight daughter from now on.

"Yes" I told him. OMEGALUL

You traumatized your children over something they wouldn't have cared about or even known about if it wasn't for your indoctrinations. Every bit as sadistic as the pedo Kyle rid us of.

The lesson you should teach your kid is not to loot, riot and burn shit and especially not attack people with rifles.

And the left are the same old retards.

WTF......the mental illness is strong in these people