TheDonald
Communities Topics Log In Sign Up
Sign In
Hot
All Posts
Settings
Win uses cookies, which are essential for the site to function. We don't want your data, nor do we share it with anyone. I accept.
DEFAULT COMMUNITIES • All General AskWin Funny Technology Animals Sports Gaming DIY Health Positive Privacy
37

Might not have been Kyle-related... Reports that SUV was fleeing from another crime scene (stabbing). It does have merit... several video clips show driver swerving around and avoiding hitting other paraders... the dancer victims were stretched across the whole road and driver trapped himself in... (media.patriots.win)
posted 57 days ago by Guffman 57 days ago by Guffman +37 / -0 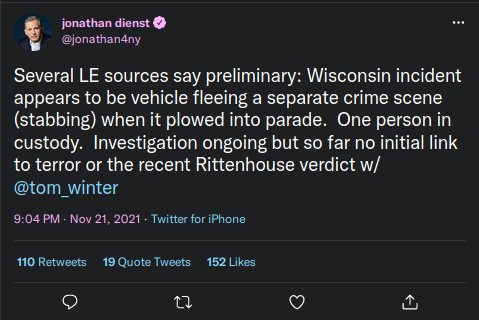 This is their excuse so they don't have to say "hate crime".

It's only a "hate crime" when the victim isn't white!

Did the cunt even honk his horn.

I've also already seen a short clip of video where a very panicked white teenage guy says, "I don't wanna make this about me, but I think I may have caused this..."

Didn't make sense when I first saw the clip, but after reading this tweet and watching quite a few video angles of the SUV... it might tie in.

Still a fucking evil subhuman, but it would explain why he didn't take out way more people that he easily could have.

Stabbing and running people over seams like terror to me.

so he forgot where the brakes were when he saw all those people? asshole could have stopped.

Sure he could have stopped, but he was a subhuman animal who chose his own wretched life over 30 innocents.

He ran over women & children.... He could have STOPPED the vehicle.

==> Stop with the fucking excuses.

This is a very partisan NBC "journalist." They are crafting a narrative because the truth will do too much damage to their efforts and agenda...

He has black supremacist posts all over his Facebook, posts about how "white people need to die", talks about race wars, made a post expressing anger at the Rittenhouse verdict, and made a post asking how to get away with running over people.

That seems to show some kind of motive.

They were NEVER going to admit that this was a BLM terrorist attack or racially motivated. They never do.

Yet in the overhead view of the attack, you can see the suspect brake before going into the crowd and then aligning himself to cause the most damage. That doesn't seem like "desperately fleeing the police."