TheDonald
Communities Topics Log In Sign Up
Sign In
Hot
All Posts
Settings
Win uses cookies, which are essential for the site to function. We don't want your data, nor do we share it with anyone. I accept.
DEFAULT COMMUNITIES • All General AskWin Funny Technology Animals Sports Gaming DIY Health Positive Privacy
3192 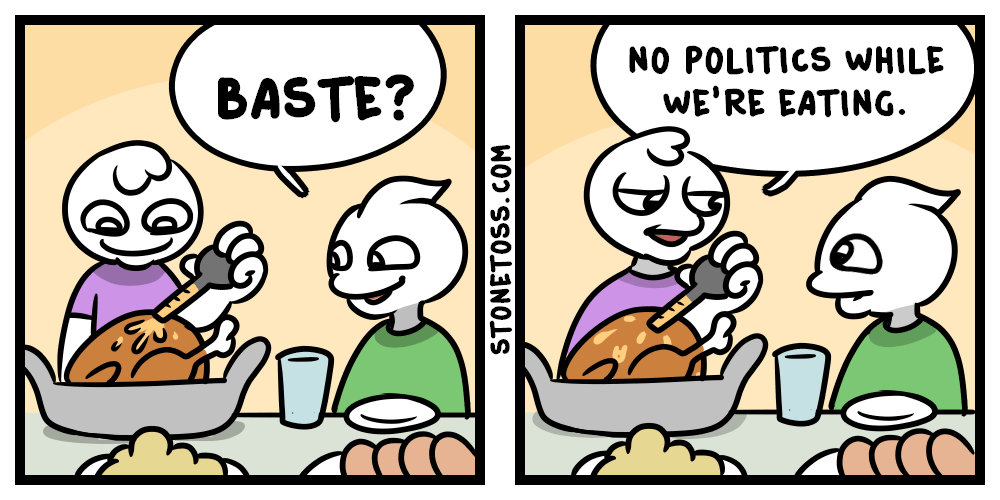 Anyone who doesn't want to talk politics simply can't defend their beliefs.

I'm a big believer that the taboos on talking politics and/or religion at the dinner table are partly responsible for how we got into this mess.

Those are two topics that we absolutely should be talking about more, not less.

Yep, the communist propagandists purposely make political discussions with family so toxic and divisive everyone just avoids it. That way they can only get their political opinions from the propagandists. Very much by design.

They told kids to use holidays to hector relatives to support Obamacare. Now they say “maybe you’ll need to report a relative to the FBI!”

How do you read this? Seems like it's just a giant picture saying to subscribe to a newsletter

At the bottom, select "Read it first"

Those who demoralize, shame and confound Communists are doing the work of God. They have relied on our honor, politeness and sense of fair play to subvert us. No more! They have exhausted any claim to good will and kindness. They have shown their true natures, and it is beyond all doubt, vile. They shall be informed in no uncertain terms that they are vile, and if they try to play for sympathy with tears and victimhood, they will reap only derision and mockery. The kid gloves are off.

for some families it's pointless either way

dad: TV said this, we must panic

me: i think they're lying to you

Rain facts on them until they curse and leave. Fvck 'em.

2021 was a banner year, .. the Humans met indoors with the food and family reunioning, while the Vax GMOs visited briefly, at a distance, outside from the walkway.

(Pretty furious, but impotent in the matter, aaaaand probably catching on by now, after their post-vaxx week in ICU, that they chose poorly.)

'Don't' talk politics? Kek, let their Destruction be a Lesson to Others.

Rain facts on them until they curse and leave. Fvck 'em.

You don't even need to bring up a single fact. Simply disagreeing or even questioning their beliefs and feelings will elicit the fight or flight response, because they view it as a personal attack.

Remember the scene from American History X at the dinner table with his family?

Everything he said was correct.

The commie infiltration was brilliant. The deep state has us worried about an actual physical Russian attack, while they were undermining EVERYTHING in the states. Scary, but glad we caught it.

But did we catch it in time?

I think so. But will we unite and do anything?

Well, we are uniting and starting to do things.

I just worry that we started too late. It's going to be close, but if we survive this current onslaught on our freedoms, the momentum should keep building.

I wonder sometimes if Russia wouldn't be an ally to the new America.

The ancient Greeks used to make a social custom of talking politics over watered-down wine. They knew that the only way to have badly considered policy rooted out was to have people talk and share ideas.

I could not agree more, except for the part about watering down the wine.

You need to have a pretty good buzz to deal with some of the nonsensical ideas that pass for politics these days.

I made this very point today

How'd that work out?

Religion is a super boring topic for the non-religious

I wonder if your statement actually proves mine correct or not?

Nope. People just have zero interest in it. Same as trying to discuss the Bachelor show with me.

People will always have interest in the meaning of life. It's probably the most important topic there is.

If not religious, the meaning of life has nothing to do with religion

"I want to enjoy my food instead of hearing about how it's my fault for it being so expensive, you Nazi bigot!!! "

Talking smack about Biden is all the gravy I need...(that's a lie, pass the gravy pls)

No politics at Thanksgiving, now help me dilate this Turkey!

They forced blinders on the masses

Or people want to come home and not think about the world's problems for 15 minutes. No one listens to you anyway, they zone you out and forget what you said by the end of the night

No politics at Thanksgiving.

Make sure you set the table settings 6 feet apart.

Eh its more like dedicating time to relaxing and not jacking my heart rate up.

This. Nobody cares about talking politics if everyone shares the same politics. The reason it gets banned is when you have opposing viewpoints and people want you to shut the fuck up so they can enjoy their time instead of spending it arguing.

Stonetoss is so baste

Laughing that this took me way to long to figure out “baste”. Thanks @jsphere256 for helping me connect the dots.

Right panel on the turkey, at the tip of the wing.

First thing I look for on a new pebble punt

Stonetoss is shifting his jokes into vocabulary I don't have.

They don't make sense anymore. Someone has to explain them and that always ruins it.

Search tells me "Baste" can mean the action shown, to scold (from the 1500s) or a village in India.

Could be short for bastard of course, but it's non-obvious.

WTF does that have to do with a village in India? GET IT TOGETHER STONETOSS.

Oh. Now I get it. And it's ruined because you had to explain it.

It's on me of course, but damn. A phonics joke. Sheesh.

Guy must be French or something

To be fair, I didn't get it either.

Your comment is more confusing than anything Stonetoss has put out. You've never heard of basting a turkey?

True knowledge is in knowing that you know nothing.

I was reading this thread and didn't understand it until now. I think it's funny but I was lost.

Yup telling us not to discuss politics at thanksgiving?

If any of you are sitting down with people who you can’t even Talk politics with at this point then you should seriously be asking yourself about the choices you are making.

Thought it was an Avenetti joke, lol

Welcome to the zeitgeist!!!

EVERYTHING IS POLITICS BRO (and if it wasn't now it is)

Political discourse is what keeps us from reverting back to violence as the solution to everything. The Left is removing the non-violent solution.

All the lefties in my group can't make to the dinner, I will have to focus on the normies.

Shame that half of Toss' cartoons these days are just endless shilling for NFTs (read: jpegs).

Your virtual wealth in pictures will be useless once SHTF.

If you think NFTs are just jpegs then you really don’t get them yet. If this metaverse stuff takes off, NFTs will be the only way you can own anything in there. Including virtual real estate.

Sure if the grid goes down the metaverse will be useless, but so will the internet. If you believe in the future of the internet, Web 3 apps are where it’s going.

Most people didn’t get the internet or see it’s value when it first came along either. It was called a fad. Go check out Decentraland and you’ll be able to better understand the proposed value of NFTs.

Well that was based.

Boo! Get off the stage!

Everything is political though?

You clearly missed the lightning bolts