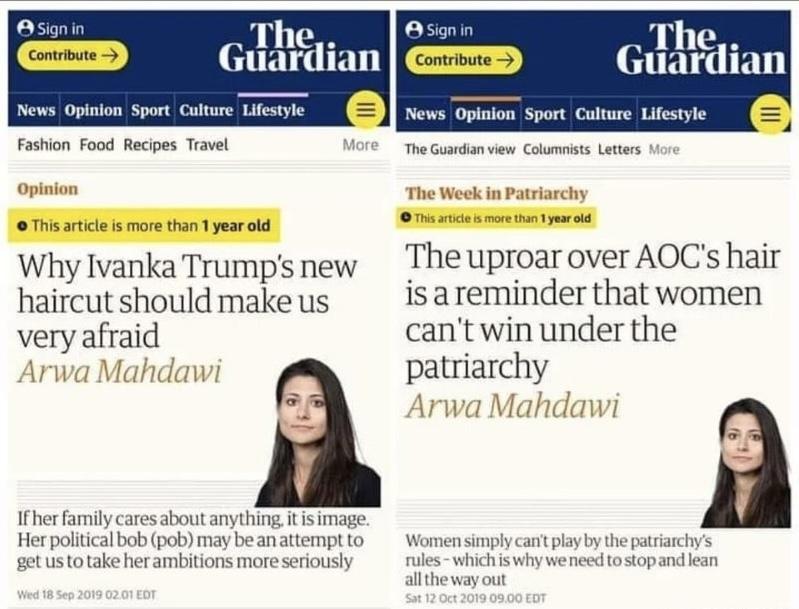 She's been "Conditioned" to act this way.

I'm waiting for the expose on Ilhan Omar's 'do.

Her views are to "dye" for.

We can't "weave" our way around these facts.

Regardless, someone needs to "straighten" her out.

She includes her profile pic with her article because she’s pretty and knows it helps sell. Because sex sells. But she’s also a feminist fighting against the patriarchy.

This is why women will NEVER collectively ‘rule’ the world.

Trotsky would be proud.

Why would we expect a woman to not contradict herself?

REEEEEE IM AFRAID OF her haircuts

"This Week in Patriarchy"... seriously? And people actually pay to subscribe to this communist shit?

Hopefully her husband / brother beats the crap out of her. I usually don't support domestic violence but I'll support it if it occurs to a domestic terrorist.

she has a wife

We don't even care about AOC's hair.

Bitch needs to STFU and brush her own hair.

She should "lean all the way out" of a bus and into a tree.

Who cares what this dumb fucking cunt says? She's has no intelligence whatsoever.

It's October and September, but she still lacks any self awareness

Whoops, my bad. But ya, the point remains the same.

Imagine being afraid of a HAIRCUT.

There are literally very few things more inert than hair.

There's nothing more frightening than a white man with a pair of scissors.

All foreign names are Jewish now apparently, even the ones that aren't.

Somwhere around half of humanity are completely brainwashed automatons.

Why do you hate women?

Pretty obvious that programming doesn't discriminate between the sexes.

Just about every one of them are foreigners or 1st gen replacements.

More fun stuff about her here:

Oddly enough, all the columnists writing about Trump's hair were men I noticed. One of them compared him to a palomino, ick.

A zombie with a human face.

Where’s your hijab, woman?! Are you a slut? Bring the stones!

In the last 2-3 weeks I've had 2 different women tell me that they'd love to just be housewives like America had in the 50's and 60's. You know, cook dinner, raise kids, go to PTA meetings. That kind of thing. One in particular has a rather successful career too. I was kind of surprised to hear her say that until I actually thought about it for a minute. There's no doubt our modern Marxist culture is anything but fulfilling.

Leftism is such a reprehensible ideology, the Marxists are actually driving people towards the words they rage against. As a result, rather apolitical women are now "pro patriarchy". It's kind of hilarious.

What do you do for a living? "I report on how people react to haircuts of political figures. It's a tough job and though it is thankless at times someone needs to do it!"

Hair? Have you seen those horse teeth?

Who is she? Surely her Twitter is burning up over this hypocrisy.

What a difference three and a half weeks makes.

“The Week in Patriarchy”

😂🤣 What a bunch of nutjobs.

Someone hold this cunt accountable already!!!

Not a particularly happing looking harpie either

I bet feminism is outlawed in whatever shithole she came from.

What's the uproar over AOC's hair? It looks okay from the neck up.

She's probably got a bush from hip-to-hip though.

My fake news folder has 303 entries

She's an idiot without a net.

Anybody have archived links to these articles?

These are by far my favorite kind of post, having the same author is the jackpot.

Terrorist with a pen

What patriarchy? These people are crazy.

Seriously, what patriarchy? I get it that men generally occupy most CEO positions in big corporations, but there are reasons. They tend to be high-energy people who have balls of steel and don't sit around bitching all the time. And that's why she will never be a big corporate CEO.

Like the baseless claims that race holds a person back, so are the claims of patriarchy baseless. Any woman who wants to step up to the bat and swing can do so. I've known several strong women who can do those jobs. We know several have led major corporations.

What we have here is just another whiner.

If you are afraid of a haircut imagine how afraid they are of covid.