TheDonald
Communities Topics Log In Sign Up
Sign In
Hot
All Posts
Settings
Win uses cookies, which are essential for the site to function. We don't want your data, nor do we share it with anyone. I accept.
DEFAULT COMMUNITIES • All General AskWin Funny Technology Animals Sports Gaming DIY Health Positive Privacy
1 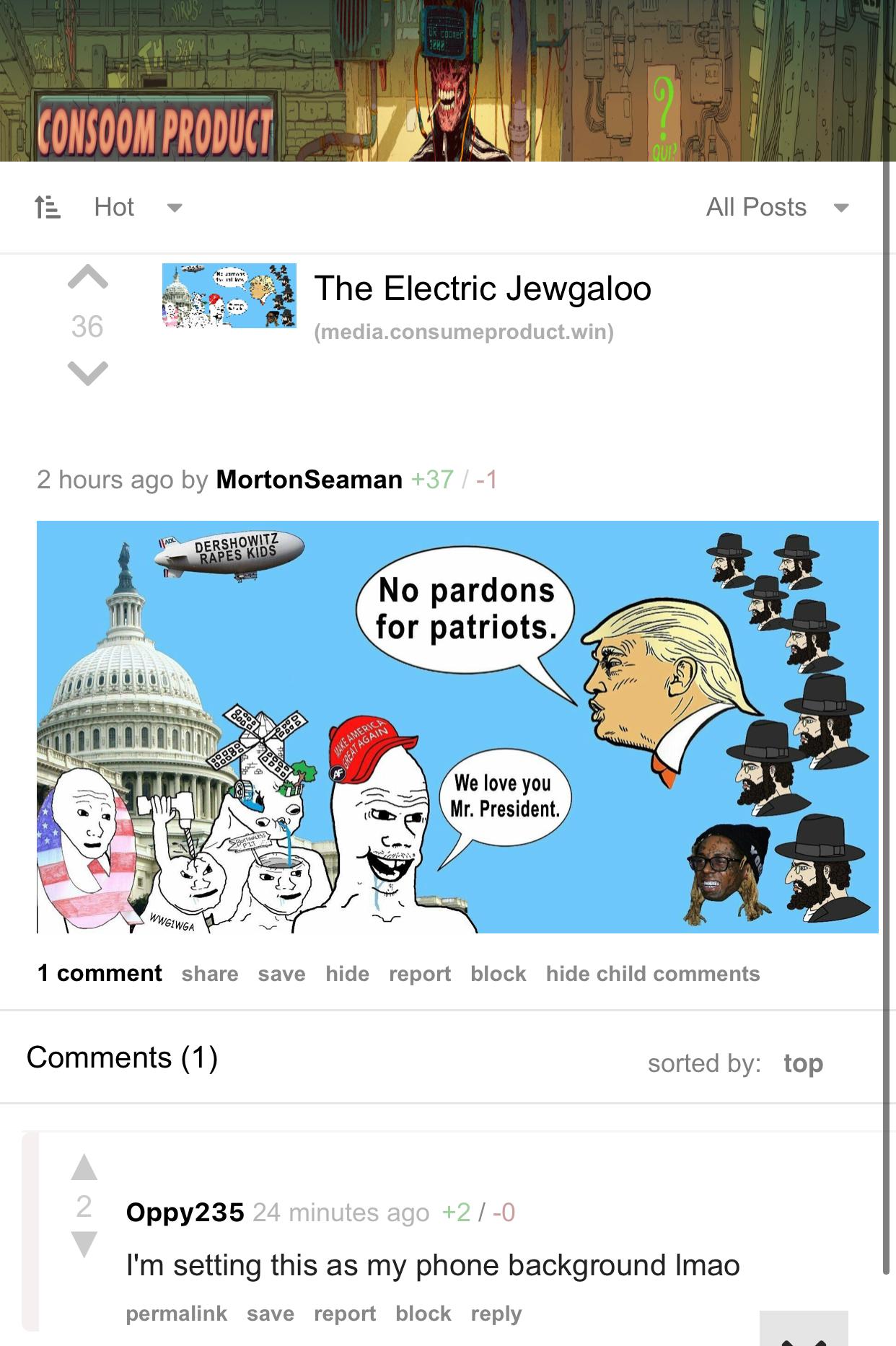 Of course you would. You have a history of insulting Trump and calling for dictatorship so anything that insults MAGA is up your alley.

Do you just copy paste this question?

DJT called for a peaceful protest not a riot. He also never called for anyone to enter the buildings so... are you just gonna repeat CNN talking points that were designed by the mainstream media to sow doubt and division? Seriously dude you are lock-step with the leftist propaganda machine.

Want to go ahead and tell us why we need to give up our guns too or are you gonna log into your alt-account first?

Those who would give up essential Liberty, to purchase a little temporary Safety, deserve neither Liberty nor Safety. - Benjamin Franklin

He who would give up all liberty, to purchase a nanny state, deserves death -BonerJam

Advocating for the dissolution of the core principles of this nation is advocating for national suicide. Not only is this literally giving up our way of life but also leads to the destruction of literally every country that has ever implemented it.

For the love of God, try and use your brain before you open your mouth and say such idiotic dribble. This is what socialists of all varieties fail to understand. American Patriots don’t crave somebody to force us into compliance because we are mature enough to take responsibility for our own lives.

Where did I say dictator u stupid bastard

we need a strongman right now I said strongman, as in “not Trump”

Hey Dictionary! What does “strongman” refer to in the political sphere?

a political leader who rules by force; dictator.

Thanks dictionary. That’s what I thought.

Trump will never call for military action. We need a wartime consiglieri

Hey dictionary, what about Consiglieri?

a member of a criminal organization or syndicate who serves as an adviser to the leader.

Oh ok. So this guy wants a criminal advisor instead of an elected leader... what a dumbass. I bet he’s such a cowardly little pussy that he’ll try and pretend he meant something else.

I see “synonym” is another word you struggle with. Remember when I pointed out that “strongman” is synonymous with dictator or did you forget what you read a few moments ago?

People here refuse to see any criticisms of their beloved Zion Don and his Israel First policies.

You realize this isn’t a criticism to those of us who aren’t anti-Semitic right?

I’m pretty impressed that Trump was able to do so much for Israeli-Arab relations and by extension the effort to create peace in the Middle East, quell Islamic-terrorism, and bring our troops home.

On the other hand.... if you are going to say “DJT is a traitor! His stepson is a Jew & he disavows white supremacy!!!!” As these asshats literally did then the issue is much deeper.

You will start to recognize things sooner or later

Sholom Rubashkin and Jonathan Pollard have entered the chat.

Lots of free real estate in your head huh? Makes sense because it’s so empty but shouldn’t you be dividing it among the German people or some other socialist idea espoused in the Nazi political platform?

According to Trump, 3.5 braindead leftists have almost ended decades of Israel "owning congress," and apparently it's a bad that thing

Trump: Confirms the Zionist Occupation Government, and wants more of it. MIGA!

You: Hurr durr that means the 3 retards questioning Israel are fundamentalists who also support Islamic State extremism. (No response on the former US president admitting to the ZOG). Report the video if you want, but it's already been downloaded and shared across all alt platforms.

Honest question, are you retarded?

Edit: if you do have all your chromosomes, then you're a shill; in which case...

Not the only three but those were the ones that Trump spoke of; sorry that you just crawled out from under your rock and don’t understand context.

Yeah, um, I didn’t say that so try again. Maybe try and address something that I did say?

Honest question, are you retarded?

Nah, actually I’ve qualified for the Triple 9 Society based off of my ACT & Miller’s Analogy scores & passed the SAT scores too although they stopped counting that the year I took it.... so if their requirements are properly calibrated we can assume an IQ in the mid 140s. IQ in general is a flawed concept so don’t feel bad about your own low scores.

Edit: if you do have all your chromosomes, then you're a shill; in which case...

Yeah. U152 master race checking in 😄. I can confirm that I have all of my chromosomes, an unusually high Neanderthal admixture, and I gotta avoid too much iron or the Celtic Curse will get me.

I dunno. It’s 54F in Tennessee right now though. What’s it like in Beijing?

What plan? Did you forget this is not GreatAwakening? Ask them about the plan.

ConProd is not diametrically opposed to Trump - you have to judge a tree by it's fruits. Most of the fruit is rotten and the end result of four years of frustration, where we are the new enemies of the state, is a sign that Trump did more things for appearances' sake than he did to establish a powerful movement that was empowered to bring lasting change. He needed to blow up the existing power structures in corporations and government - In reality he reinforced them. He deserves criticism in some areas, the unwillingness to allow that here empowers ConProd to hand out black pills like candy. Saying that they don't "belong here" because of the differing viewpoints is a leftist way of thinking.

The common ground is that everyone here left Reddit behind

Guys there’s only one way to the middle of the bell curve, these are the “far right” not fighting for citizens right to dignity and representation

It's mostly because they live in a fantasy world of paranoia where they just get in a circle jerk and tell each other better lies than the last guy.