TheDonald
Communities Topics Log In Sign Up
Sign In
Hot
All Posts
Settings
Win uses cookies, which are essential for the site to function. We don't want your data, nor do we share it with anyone. I accept.
DEFAULT COMMUNITIES • All General AskWin Funny Technology Animals Sports Gaming DIY Health Positive Privacy
2252 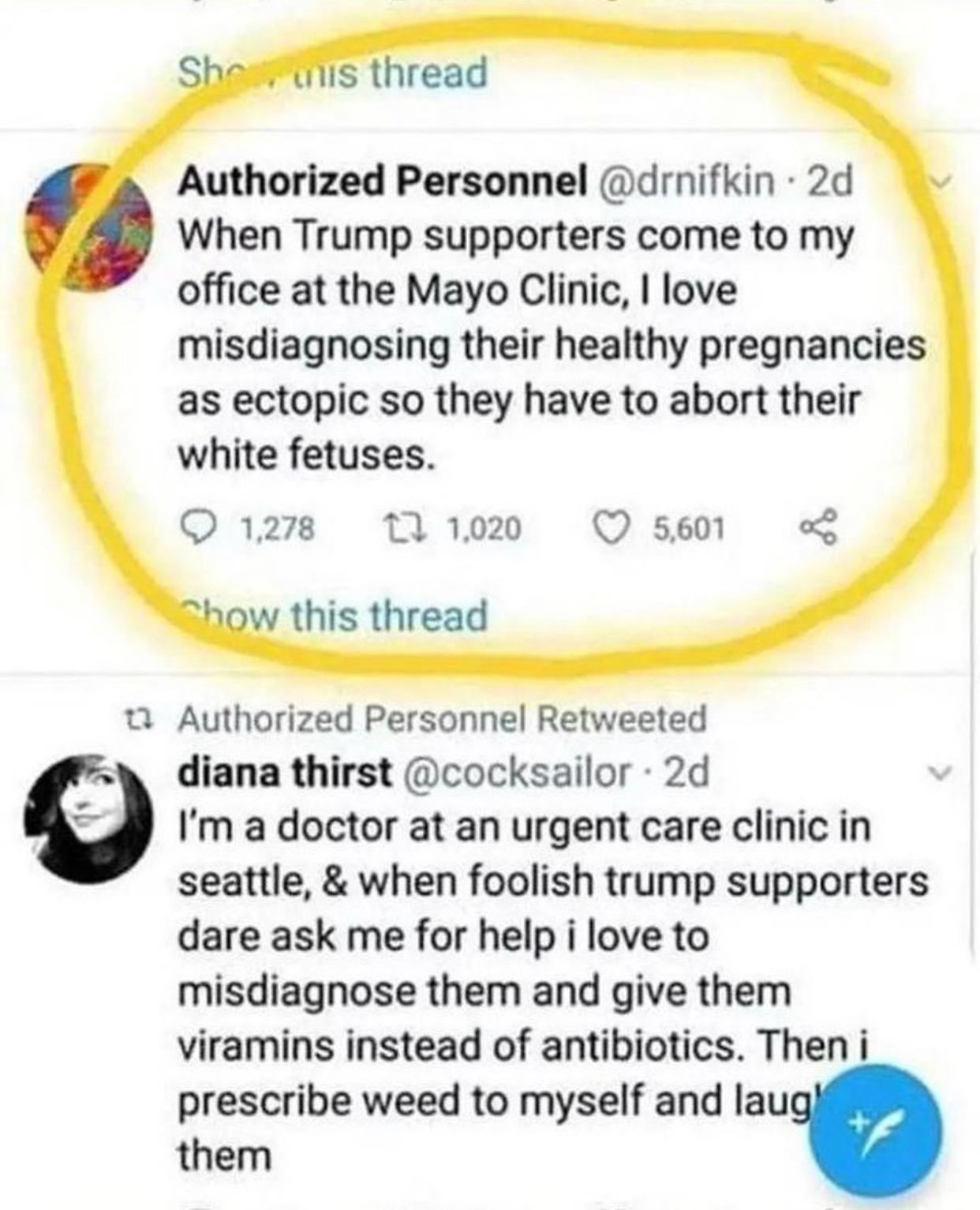 Acting like a subhuman and then saying "it was a joke bro" isn't an excuse.

The proper response is ''yeah, yeah in the fuckin' helicopter, commie".

Are you sure? Have you looked at the navy lately?

I know you're joking, but that's kinda a good point at the same time....

Have you looked at the Navy EVER?

More like...have you looked at the navy, airforce, and army lately?

Have you seen the proposed Space Force uniforms?

I'm guessing it looks like a Milo Y. outfit?

It's happened to no less than six of my friends over the past decade. Four of the babies were completely healthy. One had extremely minor issues (as in no medical treatments required). The last required open-heart surgery at birth, but is a happy four year old now. He'll have to be careful about strenuous physical activity, but it's better than being blended.

Edit to add: all white, all Christian.

My best friend was told her baby had no brain stem, and they could do an abortion that same day, no need to wait. Baby was born fine, and he ended up in the gifted program.

My wife's aunt was told both of her children were ectopic in the womb, and they are born just fine. You're goddamn right it does happen.

I was one such baby who doctors told my mother to kill because I'd be blind, deaf, dumb, retarded, sickly, stupid, if I even survived. This has contributed to my lifelong suspicion of doctors and their expertise. BTW i was her fourth child and she went on to have 3 more healthy children after me. None of us have been jabbed. Not even mom. Last I saw her she was calling her doctor a guinea pig for getting jabbed.

Glad you are here, fren.

Second and third opinions. Take them. Because a human life is on the line.

Remember when doctors told women in central America and Florida to abort because of Zika??? How many did (a lot as I recall)? And how many babies were actually born outside Brazil with microcephaly following that scare? Not many.

the mayo clinic one is a parody account, and both are now deleted.

Even so, I'm extremely sceptical that it would happen as per the fake Twitter post. A career doctor risking career and freedom that can all be unraveled by a second-opinion request. Seems highly highly unlikely.

I mean, I’m pretty sure you can’t just prescribe yourself weed.

True. May have just been a tongue-and-cheek statement about simply buying and consuming some.

yeah, this bitch is fired then murdered if it was a real dr.

This comment makes me think you may have a couple braincells.

I have family that works at Mayo and I've seen screenshots of their behind the scenes HR training and sensitivity statements. They are definitely woke, definitely don't like white people, and also they keep a list of gay or tranny employees.

Why would they keep such a list? Well, My family member thinks its so mangers know not to fire them.

archived link is even better, since real ones mass delete their posts.

Imagine telling your doctor you're a Trump supporter, or talking politics with them at all in the first place.

I'm quite easy to recognize in the church of covid that is the Netherlands, since I do not wear masks.

Ah fair enough. I am surprised you are even allowed in without one. I don't wear one in most places but even where I am they are required in hospitals.

My doc office asked me to wear two and I put them in my pocket and that was that. My doctor took his off when he saw I wasn't wearing one.

My dentist doesn't even try to ask.

My optometrist office, however, make mask nazi's look lax. It is fucking stupid how you need a rx to buy contact lenses.

The dentist. Lol put your mask on to walk into the office to his chair then take off mask and they put 4 hands in your mouth and shoot saliva all over the room lol.

All you have to do is display one "wrong" opinion and you're a nazi trump supporter. They might overhear you say "Merry Christmas" or something, and that's all it takes.

Do you think it identifies me when I say, "Merry Christmas, you godless commie!"

Probably. But what you never want them to hear you say is, "I'm proud of you, son" to your white child. They hate that. You're basically the worst person in the world at that point.

They probably figured it out when they answered "no." to "so you're here to get that thing aborted?"

This is just a liberal troll looking for outrage, don't fall for it.

The ones that are doing this shit still know better than to talk about it, but it should still make your skin crawl that they think and say things like this and think themselves morally superior.

This is business slander of the Mayo Clinic. It is a big bucks lawsuit. They should be notified.

CNN is a parody account of actual news, and look what the sandman did to them!

Rumor is he didn’t get as big of a payout as we thought he did.

how does she know they are Trump supporters?

They have jobs and insurance

They're white, pregnant, the father's in the picture, and they're not seeking abortions.

We all know they are evil, doctors are more often than not just like these cunts.

Even though this is a troll account and there is no Dr. Nifkin, the jerk has given Mayo's reputation a black eye. Mayo Clinic should be angrier.

Signs somebody isn't a doctor: Publicly admitting to crimes that would literally get your license revoked for life and get you put in prison for up to 20 years.

While this is undoubtedly fake, there was a muzzy doctor that got the boot from her residency program and lost her license for bragging about giving Jews inferior treatment.

Many of my clients are doctors. They are often not as smart as most people assume they are

Stupid commie propaganda is stupid, and so are you for falling for it and promoting it.

Also specifically claiming to work for the Mayo clinic is slander against them, so they'd have a case agaisnt this person who is attempting to ruin their reputation.

True Facts: Both of these people are Baristas.

Fake who you voted for isn’t ever brought up at doctors offices and if it was I’d get up and leave.

Ya, I have no receipts on this. I usually don't post unless I do. My doctor knows my political views from the shirts I wear. Last time I saw her she looked at my "deplorable" shirt and she said "you don't have to wear a mask while we are in this room, I read your t-shirt".

You don't abort an ectopic pregnancy. You perform emergency surgery.

The fact it's fake doesn't really matter. The problem is that when they require something to cheer them up. They imagine harming others.

You cannot live with these people.

Lol, looking at the second post. I don't think an actual medical professional would be @cocksailer

You guys need to really stop posting these shitty troll screen shots. There are countless number of troll accounts being used by foreign enemies to get us Americans outrage and divided. This forum seriously needs a crash course of spotting real and fake posts and news. It's getting ridicuolus seeing people getting bent of out shape over this bs.

I suspect these are the same "medical experts" I see on CNN.

Wouldn't a doctor lose their license to practice for doing this? I call bs.

I did a little research and fortunately this is a hoax, at least that is what it seems to be

Not that I trust them, but Mayo says it's fake too

I believe they do this. One time I went to get a haircut and like 4/7 to 5/7 of all men I am having some hair loss. I said don't make me look like Trump give me more of a Ted Cruz. She was like FINE. I'll give you a REPUBLICAN hair cut. Starts yanking my hair with a brush causing pain. I turned around and said I was KIDDING. She then remembered she was providing a service to a customer and forgot her blood lust.

These leftists are CRAZY and hate-filled.

Remember that movie where leftists were hunting Trump supporters on a ranch?

These people do want us dead.

Gee, I wonder if anyone has sent this to the Mayo Clinic?

Are doctors now asking for political affiliation from patients?

Mine did. Now I need a new doctor.

very fake. It is an IQ test.

This is from 2018 and there is no Dr Nifkin at the Mayo Clinic. They got an earful when this came out the first time 🤣

Jokes on her. Antibiotics destroy mitochondria and gut function. Vitamins are preferable unless you are in a life threatening situation.

The name "diana thirst" alone is a pun. These tweets were obviously made by trolls.

There is a place in hell for them. If true, awful.

Oh yes, because I'm entirely positive a bunch of conservative women just go have abortions on your say so, and entirely violate their deep religious convictions in the process. Derp

Another moron leftist who believes he's far more important and influential than he actually is. I doubt he's even a doctor, but assuming he is, no woman is just going to have an abortion when they feel entirely healthy, because some quack said their pregnancy was ectopic.

Did these cunts get fired? Even if they're joking, they still deserve to be fired.

Anyone gonna do something about this?

OP is just stirring the honeypot. Starting to glow

Report this Dr to the medical board!

Why does a sandwich sauce store have opinions on pregnancy???

if you believe this you're as stupid as these fake posts.