TheDonald
Communities Topics Log In Sign Up
Sign In
Hot
All Posts
Settings
Win uses cookies, which are essential for the site to function. We don't want your data, nor do we share it with anyone. I accept.
DEFAULT COMMUNITIES • All General AskWin Funny Technology Animals Sports Gaming DIY Health Positive Privacy
3066 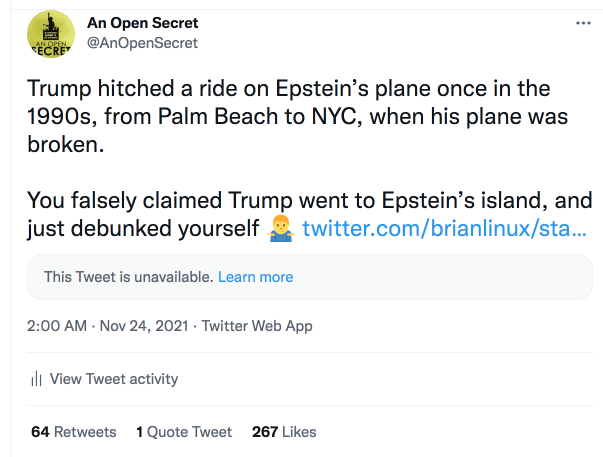 I never saw Trump's name in the flight logs. Trump separated himself from Epstein when he discovered Epstein's pedophilia. That's been about 30 years .

Trump did accept a ride on his plane(not to the island).
Epstein subsequently targeted an employees daughter at Mar-a-Lago and Trump banned him from all of his properties for life.

They are(were) both among the elites and in close proximity to one another, but they were not buddies.

To clarify, the ride was not to the pedophile Island

It wasn't even on the Lolita Express, IIRC it was another of Epstein's planes.

This interview is telling...

THANK YOU. I lost this video years back. Still had textual quote, but I appreciate the link, mate.

If you have some time, and would like some fun, here's a list of all Epstein flight logs.

Find the person who

Hint: there's only one.

He also was the only person who helped the victims of Epstein's lawyer.

Trump was in the flight logs. For Epsteins smaller plane, not the lolita express.

For a flight from Palm Beach, FL to NYC. This was before Epstein target a Mar-a-lqgo employees daughter and was banned from all Trump properties for life. After that, they were in the same elite circles, but not overly friendly. Trump was the only person to openly calll Epstein a pedophile.

When he found our Jizzlane was using Maralago to cruise for fresh meat. Kicked both her and Epstein out.

Thanks for the reply

Thanks for being here

Thanks for making the leftists dig up this shit only to find out their dear leaders are the actual pedos.

Wait until they remember there was a special council investigation where a savage detail of an island visit would have been a slam dunk and they did not have it.

Exactly. If they had ANYTHING on Trump and Epstein, the media would have been broadcasting it 24/7. All they had was the same footage of the two of them at a party with hundreds of other people. Meanwhile every photo of Epstein with Bill Clinton is just the two of them together, privately. Hmm!

They always do this with evil they can't run from. They have to make it morally relative even if they have to lie to do it.

Thanks for making websites great again.

Thank you for being a fren.

Travel down the road and back again?

And President Trump was one of the very few that recognized Epstein was a slimebag and refused to have any further dealings with him.

Something liberals refused to do because they wanted his money and underrage girls.

Media is the enemy.

Bill Gates is with Epstein after he is arrested. Media celebrates Gates.

President Trump was the only person to say Epstein was a bad person, and he warned everyone a long time ago. Media tries to link Trump to everything now.

so there is that

Bill Gates one of the richest men on the planet met with Epstein multiple times for donations to one of his Charities.>...LOL 🤡🌎 If you believe this then i have a lovely red bridge in SF for sale.

More's the pity. That was actually a paraphrase of what Gates said when asked about his association with Epstein.

Fair point. But that was a paraphrase of what Gates said when asked about his association with Epstein.

It rings along the line of "You can't prove I did what I did" to me.

IIRC he also may have been one of the very few to give information to the WPB police in an incident. Many looked the other way. Perhaps some one will chime in with concrete detail.

Perhaps the only reason why anyone heard of Epstein wasn't because he did bad things, but how "we can tie him to Trump." We didn't hear about Epstein in the GW era when Epstein was busted and served 18 months of a 10 year sentence. No suicide either.

As for Trump flying back to NJ, I guess that's why I never saw his name on the logs.

The plan was to alway tie trump to Epstein. Still is. That’s what just happened.

I knew about an Island in the Clinton presidency that Bill visited with underaged girls, but didn't fully understand it at the time or remember the name "Epstein" but it was definitely out in the open about the island.

You are thinking of Hillary Island. It is afflicted with the red algae scourge.

You're thinking of Haiti. Lol.

I believe the logs only showed a limited window of time.

Gotta watch out what gifts you accept

Commies will say anything even though the truth contradicts everything they say.

Palm Beach is so fucking awesome, why would he ever want to go back NYC is beyond me...

Because his business is still based in NYC. He has to fly in for board meetings and such, probably pretty regularly.

It runs on auto pilot. There is no board it's a small family business.

Saying "Epstein's Plane" is a bit like saying "Jay Leno's Car" too. Epstein had more than 1 plane, but ONLY 1 plane was the "Lolita Express".

Also, if I remember one of Trumps statement about this correctly, the plane wasn't even the one called The Lolita Express...it was a different, smaller plane.

Ass-hats have learn the technique, to lie at the drop of the hat, just to control a false narrative, no matter what consequence is possible.,

Well, the court is sealing the discussions and evidence with the Ghislaine Maxwell trial, so there’s nothing that’s going to be dug up. And anyone who presses for it will end up Epstein’d.

However, a bunch of high profile people have resigned in the last few days with the start of Maxwell's case. CO'S and such. Makes one go "hmmmmm?"

I would wager a large portion of the people that rode on one of his flights have nothing to do with the child sex trafficking.

My theory though about the island, is that he would get powerful people/celebrities to come to his island, get them to loosen up, and magically young girls would appear ready for action. I think he would record these events and theres a stash of videos somewhere out there, and he would use it as leverage to have them do him favors perhaps financially, have them invest in something that may not really benefit them but will increase his wealth, for fear of the video getting out.

Unsure if you’ve seen the podcast, but Eric Weinstein came to the same conclusion after he was put in just that situation when he met Epstein. He talks about it in detail.

I have not, whos podcast was it?

Just watched the whole thing, very similar theory, he clearly put a lot more thought into it than I did. I have never heard Eric talk, just heard his name, dude is clearly brilliant.

AND Trump threw Epstein OUT of Mara-Lago!

Don’t worry, Reddit is already selling it as trump flew to the island multiple times

Went reddit for the first time in a long time. Place is a commie propaganda wasteland.

I'll admit that the video of Trump with epstain where they seem to be on coke is not a good look, neither is his "on the young side" statement or what he said about Maxwell when she was arrested, but at least he didn't go on that plane TWENTY-SIX FUCKING TIMES LIKE THAT FILTHY PEDO BILL CLINTON

As always, when the left accuses GEOTUS of something, it's because they're guilty. Clintons are some foul people.

once this shit broke back in the day on reddit the conspiracy sub got flooded with cuck ass shill faggots pushing the trump angle. The og mods stopped the bullshit and people knew that trump only hitched a ride once on a different plane not the pedo express and the mods got tossed from the sub and the sub was filled with faggy pedo cucks who talk bullshit about jews all day and flat earth. It was the death of an era. Glad someone else knows what is up and is posting the truth we can't let these faggots grab onto and run with this false narrative we have to rub their noses in it like a dog who took a shit on the carpet until they choke. (not the dog just them)

And only after exhausting other options due to weather, and refused the offer of a free flight by Epstien so he paid in cash for the fuel.

I read through on the 4th of July weekend last year, all of the documents that got unsealed in the Virginia Guiffre and Jizzlane civil case.

One thing that was readily apparent was 45 wasn't involved in their mess.

Already fighting the libtards on other forums. The Lolita Island fly list was listed a long time ago.

Tom Hanks, who is now a Greece citizen, was on that list.

Funny thing about Greece is they don’t extort for pedophilia. Hmmmmm.

They don't care. They just want to say the words Trump and Epstein next to each other and snark at anybody who tries to correct them until they surrender the space.

He never needed to. Women seek out Alpha Males.

This is how I believe the Epstein and Maxwell operation worked, and how they amassed so much money and privileges:

I think the rides on his airplane were mostly just rides, but getting their names on the flight log was the prize. It was quite a brilliant scheme. Easy work after initial setup with vast rewards. They can get favors, money, property, access, and privileges from anyone whom they have a picture with or is on their flight log.

what can you do on a island that you cant do at a penthouse?

What do you mean by stay away from the natives? Like they will rape and kill you? I have never left the states (nor do i plan to).

"Natives", ie. blacks who are descendants of the black slaves in those regions, most of them on French or Spanish plantations. The actual natives of the Caribbean are Caribs, and a very small community now, completely displaced by Africans and Spanish bloodlines. The ghettos on the islands, like St. Croix or St. Thomas generally do some light criminal activity in tourist areas, but their ghettos are extremely dangerous if you're not black. Lots of mugging, drugs, rape, killings, etc. The Virgin Islands have a very high crime rate.

Take it from me, life on an island isn't all wine and roses.