TheDonald
Communities Topics Log In Sign Up
Sign In
Hot
All Posts
Settings
Win uses cookies, which are essential for the site to function. We don't want your data, nor do we share it with anyone. I accept.
DEFAULT COMMUNITIES • All General AskWin Funny Technology Animals Sports Gaming DIY Health Positive Privacy
1202

A federal judge in Kentucky just blocked the contractor mandate from going into effect in 3 states. The Biden administration does not have the constitutional authority to issue these sweeping mandates and courts are, thankfully, finding that to be the case. (media.patriots.win)
posted 57 days ago by chinita_atx 57 days ago by chinita_atx +1202 / -0 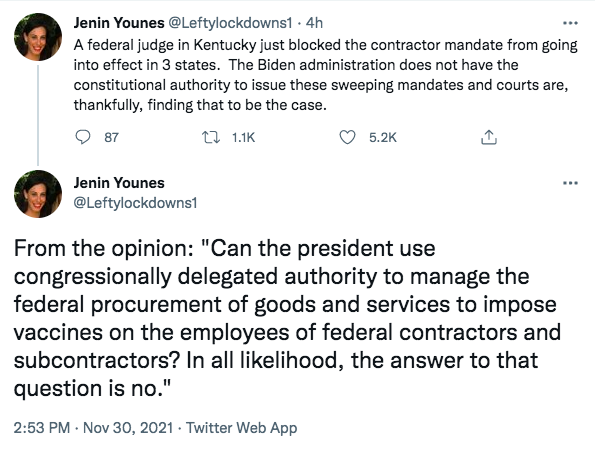 Wait…how is it only blocked in three states???

It was only the 6th circuit states (it didn't include Michigan since they have a commie AG who didn't join the lawsuit with TN, KY, and OH).

This sets the precedent for it to get expanded to a nationwide injunction (probably early next week) as another court circuit piles on. This is what happened to the CMS healthcare vaccine injunction which also happened today (it started as just a few states and just went nationwide today).

Give it a few days. This is just the start.