TheDonald
Communities Topics Log In Sign Up
Sign In
Hot
All Posts
Settings
Win uses cookies, which are essential for the site to function. We don't want your data, nor do we share it with anyone. I accept.
DEFAULT COMMUNITIES • All General AskWin Funny Technology Animals Sports Gaming DIY Health Positive Privacy
2649 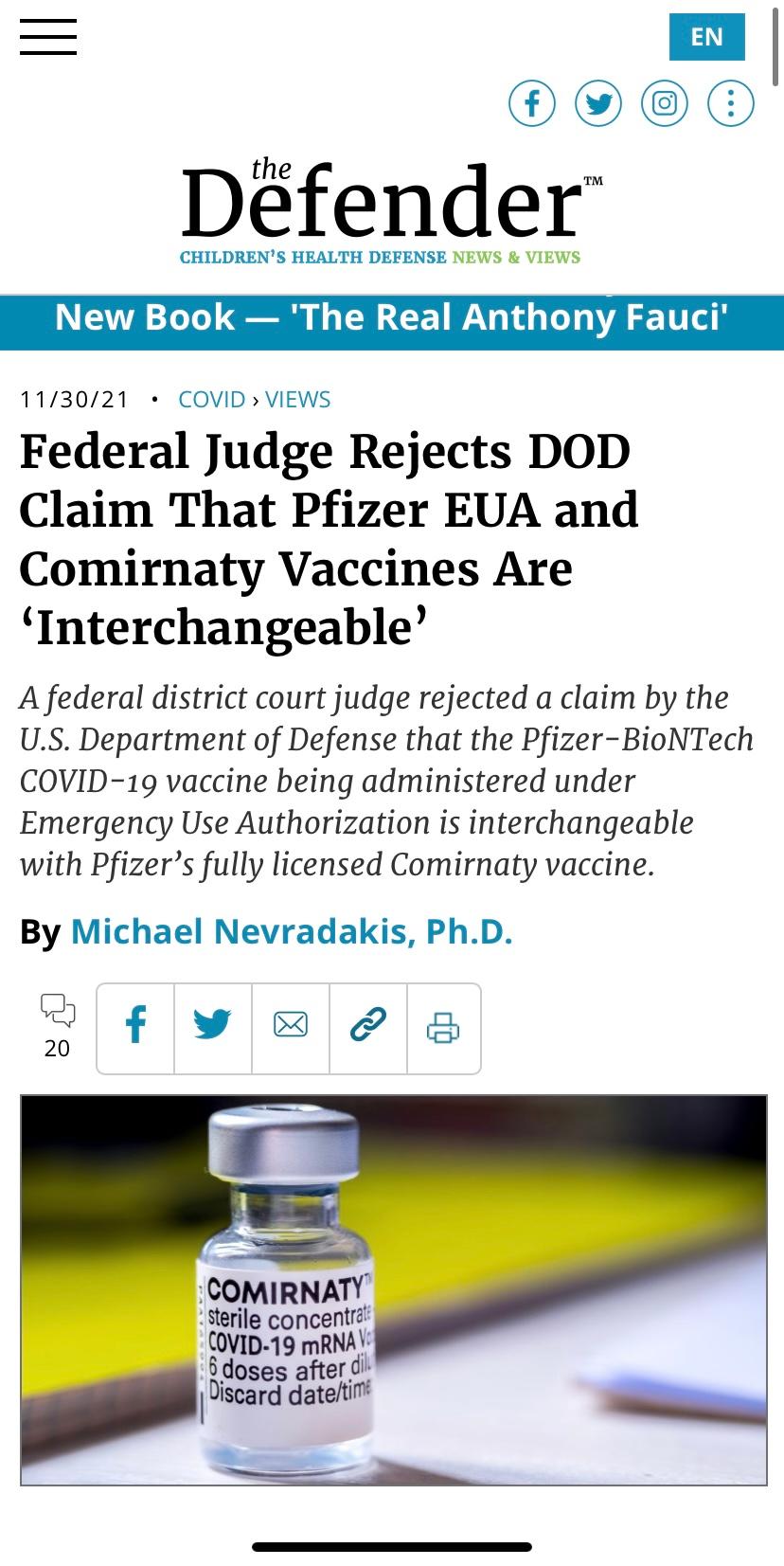 It's already too late. Everyone has to test weekly on their own dime if they didn't voluntarily give up their HIPPA rights. No waivers are being issued, OPM has been doing the termination paperwork. They are just waiting for the go order.

I gave up correcting people on this years ago

I don’t always correct them, but when I do, I call it HIPPO

That's the law that says the doctor can't tell you if your wife gained weight, right?

People call me hippo-ass. I honestly dont think its appropriate.

Why is this so funny to me 😂

You wouldn't have been laughing if you had been there to see me waddling away, with tears in my eyes, and spaghetti sauce around my mouth.

My husband went to take a test last month so he could go into the office and see his coworkers (he works remotely but they were doing a day of actually going into the office/going out to lunch— he actually really likes his coworkers so he was excited to go). Anyway, he had to go to like 5 different places to find somewhere that would do the test without an appointment, and then they asked if he was having symptoms and he said no and that it was for work. Well apparently if the test is for work you have to pay $300 out of pocket. He said F it and decided not to go. But apparently— as seems to be the case with everything now— you’re actively punished for trying to work and follow arbitrary rules to be allowed to work.

Mom? Is that you?

Their goal is to isolate people.

That would be a condition of work, so the employer would be responsible for the cost of the tests.

You can buy home tests. I assume that would be what is expected if it’s on their own dime, but I wouldn’t know for sure because I haven’t been following too closely.

Or maybe the cost of going to a military testing center is automatically deducted from their pay? If I was the military, I’d want to control my testing and testing site as a security matter.

Were not being forced to test every week if were unvaxxed. We are, however, being targeted in other ways. Regardlesd of the outcome, i will not being wearing a uniform much longer due to if its not this, it will be something else.

Confirms everything us intellectuals have known just by reading the damn text. Black and white. If you can comprehend that is..

I remember reading this, they won’t get to it before Sep 2022, and the judge will not issue an Injunction.

So the court agrees with reality but won't do anything about it yet? Sounds like the shit show with the Wisconsin court over the 200k ballots.

The dates are going to keep getting pushed back. The DoD is staring down some massive class action over this.

They cannot issue an injunction until the mandate deadline. It will happen.

it should immediately be a red light when one reads a medical headline that invokes the dod.

That was my thought as well. Why the fuck is our military branch making claims about vaccines in court????

To claim they legally forced vaccinations upon service members

It's 2021, everyone is a medical expert as long as they repeat what Fauci says.

This is Robert Kennedy Jr's website. He is phenomenal.

His new book is currently # 1 on Amazon and they are (supposedly) out of stock: The Real Anthony Fauci: Bill Gates, Big Pharma, and the Global War on Democracy and Public Health

Amazon must be seething that this and Mercola's COVID books are best sellers...

This is an excellent primer on the law governing mandates of an EUA vaccine. Seems very clear it is illegal. I wish the judge had entered an injunction. Thanks for posting.

They cannot file an injunction until the mandate deadline happens just like with eviction debacle. Any injunction filed before deadline will be dismissed.

I’m glad that someone with decision making authority figured out that this a bait-and-switch.

However, they didn't approve the injunction to stop the DoD mandatory injections, and set the trial for almost a year from now.

"Specifically, if one is injured by an EUA vaccine, the only way to claim damages and receive compensation is to apply to the Countermeasures Injury Compensation Program (CICP), an administrative process under the U.S. Department of Health and Human Services (HHS), which authorized the vaccines.

Notably, under 4% of claims made through this program have been compensated. To date, CICP has not compensated any claims for COVID-19 vaccine injuries."

Pfizer is also claiming that somehow the FDA approved vaccine still falls under this protection. How is beyond me, but hey....we no longer live in a country of with fair laws.

NOW... IF YOU WERE FORCED TO TAKE THIS SHIT AS A MILITARY ENLISTED OR OFFICER

SUE THEM FOR FRAUD. The negligence was malicious in nature.

If believe this was Robert Barns lawsuit

Dear Tim Poole, we were right. There was a press release that said the two were interchangeable but the actual approval document listed differences.

Even the press release didn't really say they were interchangeable, although they did their best to make it look like they said so. It said that if you got the first EUA shot but not the second, then your first shot of the new one would count as the 2nd shot.

I saw one that made the claim but I didn't keep a copy. I think a lot of people did see it and the interchangeable narrative came out of it... But it was not the actual approval document... Which I also read.

The very fact that both exist tell you it's not interchangeable.

If Comirnaty were available, by the EUA's on rules, they would have to discontinue using and destroy all current doses of the current vaccine.

And they ain't doing that.

Very good. If one is forced to get the vac, then say, ok I want the FDA approved one... Which is not available

This was a Trump Judge -

On April 10, 2018, President Trump nominated Winsor to serve as a United States District Judge of the United States District Court for the Northern District of Florida. He was nominated to the seat vacated by Judge Robert Lewis Hinkle, who assumed senior status on November 7, 2016.[4] On May 23, 2018, a hearing on his nomination was held before the Senate Judiciary Committee.[5] On June 14, 2018, his nomination was reported out of committee by an 11–10 vote.[6]

Civil suit? Falsely claiming a vaxx had EUA when it did not?

97% of Federal employees have been vaccinated

Draconian measures incoming by February 2022 at the latest

Most telling is that the claim was argued by the military, not Pfizer. Out tax money is paying for Pfizer’s legal claims, on top of the hundreds of billions we’re also giving them.

Nuremberg back on the menu boys!!

Of course it's not fucking interchangeable, I look forward to more of the FDA's bullshit being shot down as soon as possible.

Yeah, i could have told them that. One is mandated, authorized under emergency use and has no liability. The other is not being produced because it would remove the EUA and hold the drug manufacturers accountable.

This is everyone’s way out of this. I am not anti-Vax, but I am Opposed to being a Medical Test Subject.

Tim Pool can go fuck himself.

So, DoD will have to throw away their BioNTech stock and buy a whole new batch. Pfizer stockholders must be coming in their pants right about now.

Even attempting this is a GD joke. WTF!!

Do we have lawyer Pedes who can ELI5?

Not a ruling. As much as I wish it so.

Nodes that mean ALL of the us military now has legal claims to sue the dod?

Looks like the NWO would get their wish then

Things will turn around quick with good leadership.

From the ashes we will rebuild the American EMPIRE. Go back to what we were in the 1800s taking over countries.

Plz post the link. I went to read the full article and I can’t find it on their site :/

Would but I came across this on /pol

Of course they are interchangeable, neither one actually works.