TheDonald
Communities Topics Log In Sign Up
Sign In
Hot
All Posts
Settings
Win uses cookies, which are essential for the site to function. We don't want your data, nor do we share it with anyone. I accept.
DEFAULT COMMUNITIES • All General AskWin Funny Technology Animals Sports Gaming DIY Health Positive Privacy
35 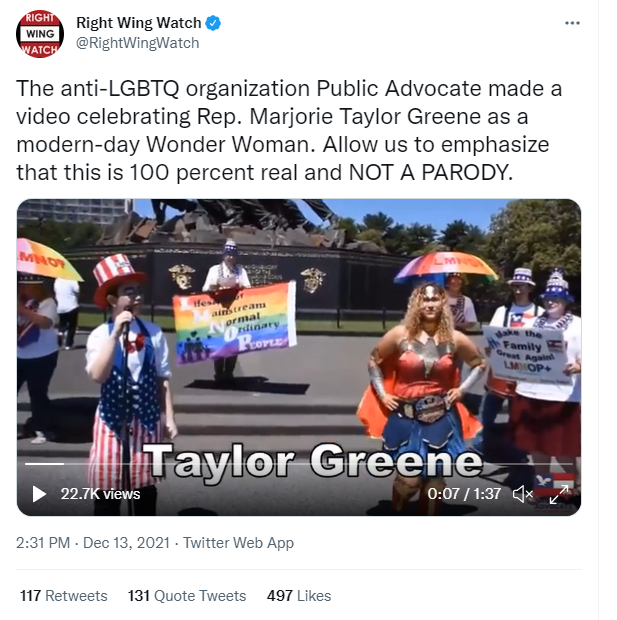 Exactly, that is why they Hate Rep. Greene: 120,000 signed petitions to Congressman Marjorie Taylor Greene because she has profoundly and consistently spoken out nationwide as a national Public Advocate in many ways:

Standing for two genders against the tide of strange unlimited fake self-descriptions of genders.

Assailed the Biden's Administration's terrible abuse of parents and children.

Standing up for women in sports getting beaten by men and opposing girls in the bathrooms getting assaulted by men.

Most recently condemning the Republican National Committee chairman Ronna Romney McDaniel betrayal of religious liberty and the pro-family pro-traditional marriage platform and a bizarre partnership with the homosexual transgender lobby.

Literally hundreds of times in every way, Congressman Marjorie Taylor Greene reflects the hopes and beliefs of most Americans and especially the 120,000 Fellow Americans who have signed petitions demanding an end to the transgender and homosexual lobby assaults on our Christian beliefs and religious liberties. Thank you, Congressman Marjorie Taylor Greene for this and May God Bless you and the USA!!! https://www.publicadvocateusa.org/news/article.php?article=12147