TheDonald
Communities Topics Log In Sign Up
Sign In
Hot
All Posts
Settings
Win uses cookies, which are essential for the site to function. We don't want your data, nor do we share it with anyone. I accept.
DEFAULT COMMUNITIES • All General AskWin Funny Technology Animals Sports Gaming DIY Health Positive Privacy
2668 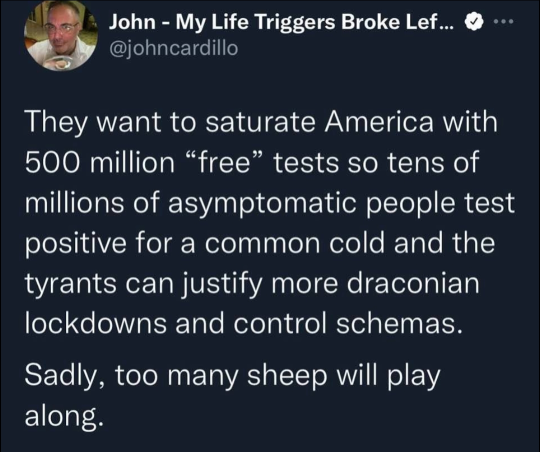 I'm gonna come in at 2 am and raise you two million here.

Same and I never will. I have never tested myself when sick before, why would I start now? So stupid.

No, do not allow anyone to use it for the benefit of Big Pharma and The Gay Reset.

If the osha ets mandate goes through, they will distribute "tests" to infect people that refuse the gay vaccine

Been tested twice because my wife was covid positive after tripple-jabbed old ladies at her nursing home infected her.

Twice tested, twice negative even tho i sleep next to my covid positive wife for almost two weeks now

Have friends with similar stories. It's not as contagious as they claim. And easily recoverable. We have been bamboozled. Crimea against humanity

Good health to you and your wife!

Thanks, same to you, she just had a runny nose, throat pain and a light cough

Not a big international flyer are yeah

I think this will backfire. Upload tens of thousands of videos of people testing their cantaloupes, lemonade and pizza for Covid and it showing positive…

Let's make this a social media challenge. Pick an item, stream yourself testing said item, if the item tests positive send a $10 donation to your city or county gop.

You can already find these on twitter and the NPC programming is "hurr durr, misusing a test gives irrelevant results"

And how will they manufacture the death? How will people react to vaccines in the future?

So why get the jab if you’re going to be constantly tested anyway?

Because if the jab doesn't kill you first, it almost guarantees that you will be constantly reinfected with COVID thus perpetuating the "pandemic" and allowing the left to bank on endless lock downs and mandates.

Endemic. Time to start calling it what it is. It became endemic the moment the non-vaccine vaccines were pushed on people.

A "vaccine" that allows you to contract it, carry it, and spread it. Is the guaranteed way to keep it around forever. Endemic.

My supervisor said he was "really sick" this weekend. The day before, he was talking to our group how he was triple jabbed and said he would get more if he could get them.

He went today to get tested for the coof. He waited over an hour and said the line for testing went from the back of the building all the way to the street.

You don't even need to return the results.

They now have the ability to claim tens of millions of positive results.

Anyone who can defeat that narrative, please step forward.

So they mail you tests and you take them but don’t report/send them back. How are they saying these are positive? I’m missing something.

Nothing to see here.

I'm almost positive I'm at the tail end of a nasty week with covid, but there is no way I will get tested. Not playing their game.

Luckily I had bought a tube at tractor supply months ago. I started on day 4 after steadily getting worse and was much better quickly. Criminal that we have to resort to animal formulas because our government is evil. I think I will use a teledoc for the pills now .

Got my last order from them in 13 days. It was literally the quickest I ever have from them.

Dont get tested. Simple as that.

I am starting to think people with jobs are scamming the system to get out of work for a couple weeks.

Would explain why the CDC reduced isolation from 10 days to 5.

My company doesnt require proof. So people are just saying they have it and work from home for 5 days

Correct answer. Family member who works in HR said PTO only for those with positive test.

We MUST use those tests to prove they are unreliable. A "fraud test" campaign.

I have never been tested.

Haha, I've been telling people this wave of fake testing for no reason was coming in early 2022... they all said I was crazy, again. Mass Formation Psychosis is 100% legit.

"free" as in we just paid for that shit.

Only way they can carry it to Nov's election..

They will try the lockdown game again. This is why you have to beat them at their own game.

NPCs will want to keep things open as long as the jabs and boosters exist.

They got away with the exact same thing in 2020, of course they'll try it again.

Yep. That is the goal. They always focus on cases and not severity. This is the perfect plan for the China Democrat Axis powers to kill America.

Fucking bullshit! I want my damn tax money that's being wasted on this garbage back!

Fucking bullshit! I want my damn tax money that's being wasted on this garbage back!

What about your tax dollars that are being sent to countries like Israel and Pakistan? It's all fucking bullshit. Taxation should be like church donations... check the box you want your money to go to.... roads, poor people, or foreign countries... pick one. I pick roads.

For several reasons, the D is in full panic mode. Partly the mid terms approach, and partly simply the way criminals act when the law is closing in.

I don't know if that will work this time. The last time this was new territory, and more states will were willing to shut down. Most if not all red states won't go with that this time, as second lockdown would irrecoverably damage their economies. Even if the Fed is willing to offer covid money fresh from the printer, It'll torpedo the economic position of to many people. There would likely to be to much political backlash. IF enough states don't go to lock down, and its only the few super-majority blue states, their won't be enough drive in Washington for stimulus and covid pork. If the battleground states go into lockdown, that will be the real test.

Dems biggest goal is just enough lockdown the get mail-in ballots. But their walking a real tight rope, their Globalist masters certainly want to destroy the economy for their Great Reset, but the Dems tax-paying supporters don't want to totally destroy their economic position, there is only so much they'll sacrifice so they can virtue signal about it before if makes them one of the "poor white trash trailer dwellers". The Dems Gib-dependant base will only go along with this as long as they believe the Dems will actually deliver on those promised Gibs, and checking the internet lately- that crowd is showing signs of losing faith the current crop of Dems to do that.

Most of these supposed asymptomatic people are probably just getting false positive PCR tests.

I think it might be time to get familiarity with your local postal people and where they lay their heads. You want to commie? There are repercussions.

Cool, that means that we'll hit natural immunity saturation and can go on about our lives.

If you can't see the midterm game, you're blind.

Actually, mailing out 500MM test kits to a population of 330MM is just a gesture of peace to porch pirates. I bet these test kits are worth $5-$10 to all the goofs that are vaxxed and boosted but need to be tested harder.

They don't even care if anyone takes the tests. They'll just fake the results they need.

Or lace the tests with something actually dangerous

Sad how easily they'll convince people to go along with their progressive slide toward tyranny.

A few of my friends were supposed to go to St. John last week. They all had to provide a negative test. All tested positive and none of them are sick. They’re all vaxxed.

several asymptomatic kids were sent home today from the school I teach at because they tested positive. I have a feeling that If I took 10 tests 5 would be positive.

several asymptomatic kids were sent home today from the school I teach at because they tested positive. I have a feeling that If I took 10 tests 5 would be positive.

Meanwhile my husband took my grandson to "Head Start" the other day and a snotty nosed kid who couldn't stop coughing was there waiting to be sent home. Our entire family got sick. Not saying it's related but.... totally NOT Covid but, shit, that shit SUCKED!

These tests do jack shit. None of them work at all worth a damn. So many people I know tested positive on a lab test after testing negative on a home test

They are Universal Covid Mail In Ballots so we can have distributed fraud in TWO major areas of life.

The PCR tests aren’t under EUA any more. How are the home tests still on there? They can’t be more accurate than the PCR tests. This is silly big clown bonanza town.

So volunteer to hand them out and hand them to the dump. Got it.

It doesn't matter who uses the test or the results. They can just fabricate what ever number of positive/ negative they want and who is to know?

They are using this as a means to either keep the scam going or turn it off.

It's a metaphorical gun to the head of the nation.

I will destroy mine with a hammer before chucking it into the trash.

Haven’t taken one covid test through this whole thing. I’m not helping them pump the numbers up.

That’s not exactly the plan. A lot of this results from the Democrat Party’s do-gooder agenda to promise Black people the same services upper middle-class white people get (albeit invariably years after the fact). These tests will definitely be used to underwrite inflated “case” numbers but they’re really just a cheap giveaway political stunt … like Obama phones.

The sheep are already playing along. Nothing on local news except about self test kits selling out and hours long lines at testing sites. Also screaming about the fact we have 1 million covid cases in a 24 hour period.

Not gunna do it. Im sick right now, home test (that I bought) said COVID. No way am i getting "Professionally" Tested.

It’s working. We’ve got 2400 national guardsman in my state working in hospitals and running testing sites. Gotta ramp up that fear.

Also the government is about to buy up the entire inventory of tests in order to make it harder to employers to let their employees test out of the vaccine requirement.