TheDonald
Communities Topics Log In Sign Up
Sign In
Hot
All Posts
Settings
Win uses cookies, which are essential for the site to function. We don't want your data, nor do we share it with anyone. I accept.
DEFAULT COMMUNITIES • All General AskWin Funny Technology Animals Sports Gaming DIY Health Positive Privacy
583

Chans are a buzz like 2019... CCP released a new virus "Marburg" causes hemorrhagic fever. Pics of mass migration to camps in China, also story about Dallas Nurse who saw one case in her hospital. Chans agree CCP and DNC are doing it all over again to steal mid-terms and force vax for poll watcher (media.patriots.win)
posted 171 days ago by kek_saved_the_world 171 days ago by kek_saved_the_world +588 / -5 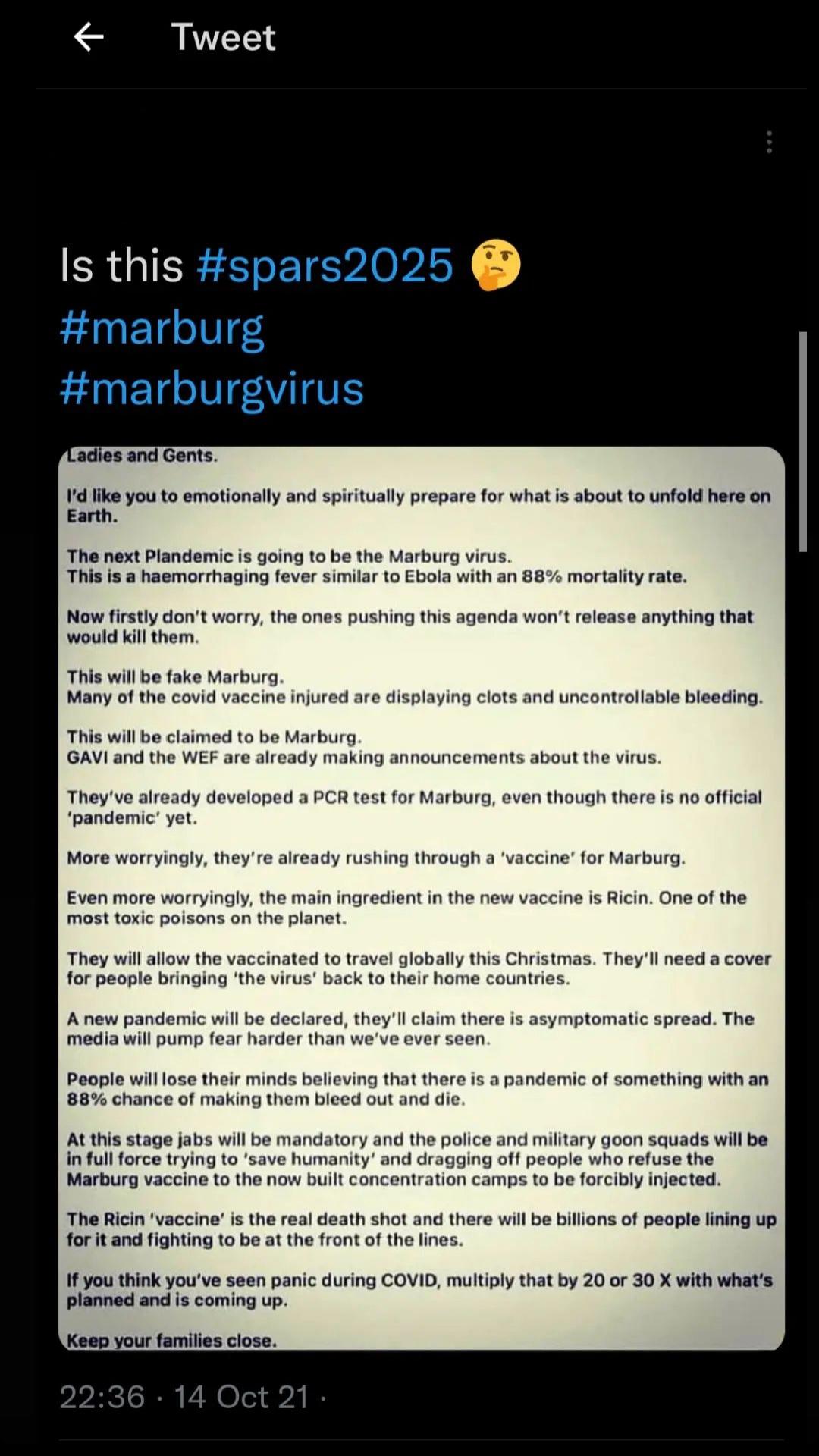 eVeR gIvEn iS tHe eNd oF tHe wOrLd eCoNoMy

Well said. I too fell for the narrative of "utter destruction" being covered up in China at the end of 2019 & start of 2020. I remember all of those videos of people dying in the streets, hospitals, etc—it looked dire, and I believed China was covering up something grave. I immediately stocked up on food & supplies and bought a few boxes of N95 masks (they were plentiful and cheap at that moment), as a contingency for the worst.

I was completely duped; obviously we did not have all the facts and it is difficult to know what to trust nowadays. I feel like all of those early videos out of China seem to have disappeared from the Earth; people act like they don't remember them and how they set the (completely false) tone for a rationale of accepting lockdowns and other measures early on.

It wasn't just China, though. I remember how right after, it spread to Italy and supposedly decimated it. All the news and videos out of there seemed dire as well. But the last I read about it in retrospect, apparently it was not that bad over there, and—to nobody's surprise—it was primarily the elderly and unhealthy who were hospitalized and died.

It does seem that both information out of China and Italy early on were manipulated by various bad actors and used to fool a lot of people in different ways. Definitely something to reflect upon.

"When everything the public believes is wrong" the CIA.

Exhausting you is part of the point.

I was super concerned too and stocked up just in case. Then it kind of was underwhelming but overhyped and I was wondering if I had been misled. I was but I had lots of toilet paper and food so I just kind of ignored it.

Tweet from October 2021. By my calculation, it should be a couple more weeks now...

Ben Harnwell has been reporting on this on Bannon's War Room since last week. His contacts have told him a huge city was shut down down to try and contain it (bigger than NYC)...it has now spread to another city...people are bleeding from their eyes, ears, noses, and mouths...people are starving because they aren't allowed out to get food. The Chicoms have blamed it on some Pakistanis who traveled there, I think. I'm not sure what to think about it.

This was Harnwell's first report. https://rumble.com/vrbo5v-13-million-forced-to-lock-down-war-room-pandemic.html He has since reported almost daily, and today on War Room, he discussed the geographic spread in Chyna. A few days ago, Bannon says other media outlets are now reporting on this...Newsmax, CNN, Daily Mail, I think.

Soon to be ground up in frozen potstickers headed to our shores.

Is it a weaponized version of it though

4chan is good at investigating.

its not good at predicting the future.

What!?! Yes they are. They just predict every scenario possible 1000 different ways 😁😁😁

lol, they just accurately predict what happens in alternate universes

i am in favor of quarantining china instead of everyone else

Let's build a wall around China!

You sir… have just been promoted to team captain

Already saw this movie. Dustin Hoffman was the hero, Kevin Spacey died, and somehow Cuba Gooding Jr. Is both a doctor and a helicopter pilot.

Ya know, I never thought to question Gooding Jr.'s skillset in that movie until I read this.

I always really liked it.

That movie, and many others like it, were likely gaslighting to prepare the collective psyche to accept things like the current fake pandemic.

Can confirm that bleeding like this was mentioned as happening in China on Bannon earlier this week..

I mean, CoVid was a real corona virus…

That's from October 21. The timeframe it mentions already passed.

Yup. I remember hearing about "Marburg" months ago and this site was all abuzz then. People love to be terrified.

Jack Carr literally had a book about this come out last year called The Devil's Hand. Some LARP guy probably read it and decided have some fun.

New cases caused the current lockdown in China now. Busing people to camps.. Same thing happened last time, sep and oct of 2019 people came forward explaining what they were doing and then it hit in December and January

I don't believe it. Almost nothing gets out of China without the CCP allowing it. You are getting video of these shutdown cities in ways that the person doing the filming had to be out in the open doing it. It's just like the early "covid" crap. None of this information would be coming out, or very, very, very little of it, without CCP approval.

Also, all of the viruses in this family, as is the case for almost every very lethal disease, are not highly transmissable. Do not touch the feces, vomit, or blood of a person that's infected. If you can handle that, you will be just fine.

Viruses that kill their hosts too quickly have a tough time reproducing.

This is happening alongside Omicron and another new Covid Varfiant they just announced from diff country today.

From what we know so far.

The scary thing is close to 1,000,000 people from Xi’an traveled outside of the city before lockdowns began, and other cities within the region are experiencing similar cases with symptomatic patients awaiting PCR Tests for confirmation.

IFR rate 22% Takes 5 days to show symptoms but are still contagious before developing them.

Is this for the new variant?

Found my own answer. https://www.news-medical.net/health/What-is-Case-Fatality-Rate-(CFR).aspx

So this is actually a good thing - going to move fast and hard against the boosted - the demographic that will panic the most.

We already guessed something like this - either they're going to release something seriously deadly and most of us who have lost faith in the medical system will be exposed, OR they're going to go full retard and kill off their own base.

Or trigger their already brainwashed base to kill off us.

Either way they get what they want, the people left will be so emaciated it'll be easy to control them. They will help the ones, just enough, they deem worthy to keep.

Agreed. Communists “make the world a better place” by murdering their neighbours. They are waiting for leadership to authorize it.

If Marburg ever gets released, we're all fucked.

What Chyna would release (contingent to a Taiwan invasion scenario) is likely not Marburg, rather the more transmissible Henipah / Nipah. Stolen from Canadian BSL4 lab by CCP. Also subject of gain of function. https://ici.radio-canada.ca/rci/en/news/1800416/wake-up-call-for-canada-security-experts-say-case-of-2-fired-scientists-could-point-to-espionage

Nope, they are lying about all vaccines.

Yeah. Look up the Marburg U-variant. Scary AF! I probably wouldn't leave my house if that shit got loose!

Some one just got done reading The Devil's Hand by Jack Carr haha. If Marburg really got out we'd all be fucked and there wouldnt be a vax for stopping it. Would take literal carpet bombings with high high heat to kill it and everything in the infected area. No way China would let that out in their own country.

So we are being dominated into a plan to.... literally kill everyone with a vaccine?

This is a low quality LARP.

If the Chan’s don’t name the jew, they’re just as fraudulent as everyone else.

The spread vector will be the winter olympics. They will claim it broke out in the teams and spread everywhere except countries that have no winter teams (and very few vax recipients).

I don't think it will be ricin though. Far too deadly. People may notice all the people dropping dead and not go out and get their shot. Probably something that takes a bit of time. More spike?

u/kek_saved_the_world has been posting a lot of sensational bs lately.