TheDonald
Communities Topics Log In Sign Up
Sign In
Hot
All Posts
Settings
Win uses cookies, which are essential for the site to function. We don't want your data, nor do we share it with anyone. I accept.
DEFAULT COMMUNITIES • All General AskWin Funny Technology Animals Sports Gaming DIY Health Positive Privacy
2458 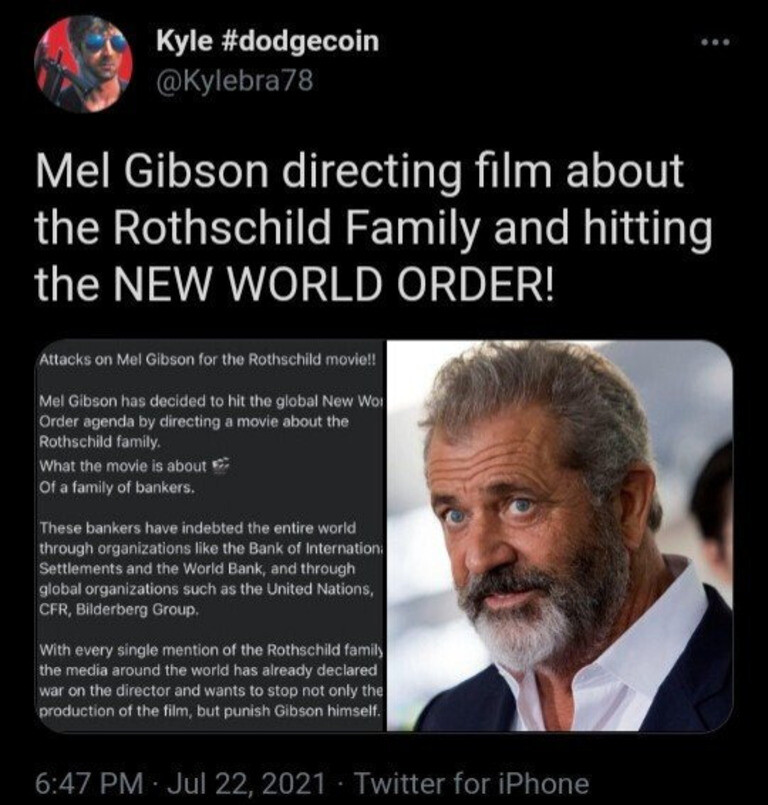 God protect this man and don't let them 'Kubrick' him.

Mel Gibson did not kill himself

Sadly, this isn't true and there is no movie in production under the name ''Rothchild' . He is not acting in, producing, or directing it. This rumor had been circulating since the very beginning of 2020. The Passion of The Christ 2 is something to look forward too, though.

Yep, I'm sick of fake shit like this ending up here. A quick search determined that OP is, in fact, a faggot.

True, but I never call it out because I want this to be meme'd into reality! :D

The theory is that Kubrick's Eyes Wide Shut strayed a little bit too close to reality for the elites' liking...

Hmmm, how about that. That movie came out the same year he died at the young age of 71.

Would love to see that Directors Cut...

You must dig a little deeper into the lore behind that film.

The long & short of it is that it conveyed the cabal & the satanic, ritualistic BS involved to “join the club.” One of the theories is, among the many masks that represent real persons, is one that represents GEOTUS, when they were trying to recruit him. The mask in question is orange-ish in color, and has a shocked look about it, because he wanted nothing to do with it after what he saw. There’s supposedly a scene—and if it was shot, it’s never been seen—where either that character or Cruise’s (can’t recall) walk past a door where a ritual with a child is being performed. There’s much more. But it’s late and I’m somewhat toasted. Look it up. I’m guessing you have an internet machine.

I get the feeling this will be used to cuck Mel, to make an example out of him. The movie will be pro-Rothschild.

Mel Gibson did not kill himself.

The Rothschilds: Controlling the World's Money Supply for More Than Two Centuries:

I'm shocked this is the first I'm hearing about it!

I've long said that a movie based on The Creature From Jekyll Island would be one of the best movies ever. I hope that is shown in this movie.

Mel Gibson is one of like 3 members of hollywood I think ISN'T a pedo.

Get The Gringo is underrated.

Word has it he was planning to make a Viking epic, similar to Braveheart and Apocalypto..until Hollywood canceled him :(

If he lives long enough to finish it.

Love this man, I pray God gives him a hedge of protection from them. This is the type of stuff that makes you "kill yourself" with two shots to the back of the head while driving a car into a wall.

...at the gym no less. Nasty business.

Stop spreading disinformation!. Mel Gibson isn't directing a movie about THE Rothschilds. He is acting in a movie named Rothshild by another director also starring Cuck Shia Labafoon and it has ZERO to do with the banker family Rothschild.

Neither are listed as working on or in a movie with that name, the only movie Shia is working on is one with Deniro that's about prison.

You need to take your own advice.

If you search for the movie you find many news about it in 2019/2020. Maybe it was put on ice or scrapped during the coof.

I heard this was actually a larp, and the name of the movie has no reference to what we hope it's about.

Same this is old news and possibly fake.

My God I hope he has excellent security, and lots of it. What a brave man.

The Rothschilds are lightweights, Vanguard & Blackrock control the world

And which families own those?

I would say Rothschilds right at the top of owning. Fuckers have been around for centuries.

Vanguard and Blackrock are Rothschilds middlemen my fren.

…just make sure you don’t bring Alec Baldwin on the set.

If you do a little research the movie supposedly stars Shia Lebouf, one of our favs, and is a "dark comedy"...highly doubt we'll see anything earth shattering here

Mel knows the score, and he knows how to tell a story. He’ll get the message across.

Shia Lebouf, the guy obsessed with hating Trump and "He will not divide us?"...

"He will nut inside us."

Maybe Mel will have him digging holes the entire time. That would be funny.

The nose will try to stop him. They already got him cancelled after making the Passion of the Christ.

But he killed it in sales with that movie

I hope this man walks in a unpredictable zig zag pattern...god please watch over him

Ah, so thats why my news feed was filled with attack articles against this man all of a sudden

Not to mention Resurrection due for release this year!

He never really did care for their people lol

Ah now we know the roots of his comments during that traffic stop. Go Mel!

That dude is so based and is so brave. They left him for dead when he called them out as pedos and he was kicked out of Hollywood and started from scratch as a director. Never backed down.

What we need are some independent film makers making movies about standing up to tyranny in this current situation.

Mel Gibson did not kill himself

He is a based Santa Claus

You all are fucking idiots. It's a parody - it's not a expose. I swear...some of you all really bring the movement down. You believe anything! As bad as the fucking left...

I have a feeling he'll have a hard time filling top billing roles with anybody other than truly based actors.

So.... here's looking at you, Kurt Russel and John Schneider! That movie's gonna be sa-weet!

Mel is the OG gigachad.

Will he explore Klaus Schwab's "roots"?

Watch for this man’s drug overdose/suicide in the coming months.

sorry to hear about his impending suicide....

Great. Do George Soros next.

If alive they should consider the main actor of Babe (1995), that little pig was amazing.