TheDonald
Communities Topics Log In Sign Up
Sign In
Hot
All Posts
Settings
Win uses cookies, which are essential for the site to function. We don't want your data, nor do we share it with anyone. I accept.
DEFAULT COMMUNITIES • All General AskWin Funny Technology Animals Sports Gaming DIY Health Positive Privacy
2654 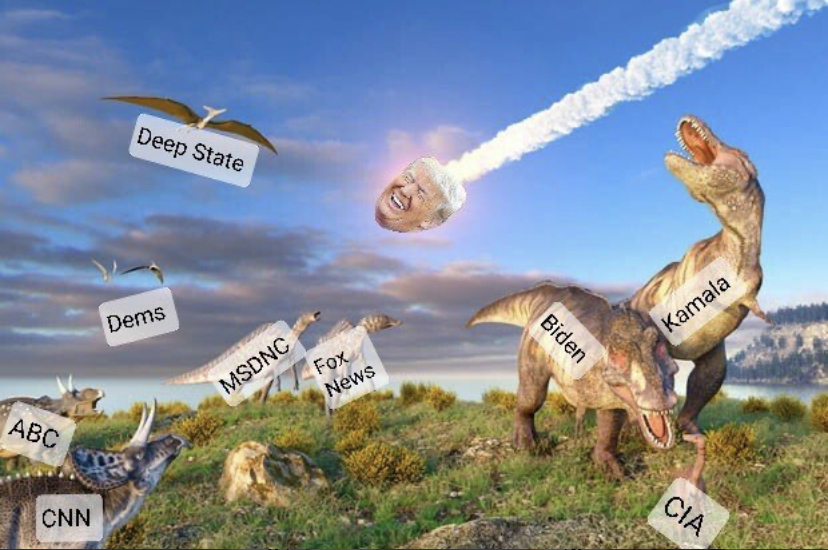 I remember this delicious meme!

That one missed though :(

In the (somewhat) words of Ian Malcolm....

Same as the CIA Dino, they just use a different acronym when they operate domestically:

That one got hit in mid air

Still gotta figure out how we’re gonna address possibly 6+ states who will simultaneously stop vote counting at 3 am when Trump is winning by even more this time, maybe 20% or more only to lose in the morning.

Same as last time. We'll say "Wait a minute! That's not legal!" then the DNC/RINO/MSM alliance will call us "racist" for objecting to another fraudulent election scam. The supreme court will say "no standing" (if they even bother to address it) because of fear of "intensifying the rioting" as the rioting intensifies.

> I am getting used to this "no surprises" way of looking at things. When one expects the worst from people who focus on doing their worst, "unpleasant surprises" are a thing of the past.

Then they say fuck it and arrest him for no reason and make it stick for no reason other then pedophilia blackmail against judges who are overseeing the whole thing and we lose again....

Yeah I’m curious what their approach is gonna be this time, are they gonna just steal it again or arrest him? Because both are plausible.

Although I think they’ll only arrest him if stealing becomes too ridiculous. Like if polling is looking like they will have to manufacture 100 million votes, they will probably just say fuck it, and arrest him before the election. But otherwise the steal was pretty ridiculous last time so they’ll probably just do that again since nothing appears to be happening to anyone for it.

> are they gonna just steal it again or arrest him?

I don't see how arresting him is a good backup to stealing it. We'll still vote for him even if they conjure up some BS charges. And then shit will really fly if the vote is too large to overcome and they got him sitting in jail.

This needs a high energy flair.

I loved Trump but hes not tough enough to clean up the Ocean of Swamp. We would need a literal Hitler with ovens and helicopters to clean up this mess and lets face it thats never going to happen.

We need to regain control of our elections if we want this to be true!

We never had control to begin with, Trumps only achievement was expossing the scam and waking up half of the population.

From now on, real life SJW reeeee-ing should have the Jurassic Park T-Rex roar superimposed over it.

They didn't do anything wrong & must have been incredible creatures.

Nah, they were authoritarian fascist dicks that ruled over all the smaller creatures with an iron fist. They had to go.

Lol yes they did rule over small creatures but we're talking about animals or giant animals that were designed or created to be how we know them.

Donald's comet, only seen once in a lifetime

Damn, I just made a dinosaur comment hours ago and here we are. Now that's service, folks! :D

Sorry but what did he do exactly? The deep state is stronger than ever and his supporters are in jail with one of them killed.

Sorry but what exactly was/is he supposed to do about it, he is but one man in a sea of serpents. He did something no other president has done by exposing all of this. Before Trump most people were asleep, living normal lives and mostly following the right or left narrative. Since Trump tens of millions have seen the swamp and have become more active in fighting it. There may only be small battles and small victories here and there but it’s better than just following along with it like most of us were. My question to you is what are you yourself are willing or prepared to do, other than bitch about someone not doing enough for you.

Well according to the picture here he was supposed to make the entire swamp, cia, fbi etc etc extict. Hence my reply.

But to answer your question, how about securing the elections so they werent stolen? How about not letting a communist puppet leader be instated? How about pardoning his followers who are now rotting in jail? Or seek justice for the Ashley Babbit? Or how about not pushing the clot shot at every rally? Instead everyone got told to go home peacefully as the country got taken over, but he still makes some mean tweets so I guess its alright.

How do you know he’s not doing any of that? Just because he’s not tearing through the country with a militia and hanging all the corrupt individuals behind the steal means he’s not doing anything at all? Again, what are you doing about any of this??

Im not president and I dont live in the USA so who cares what Im doing. Also tell that to the people locked up while he keeps saying "the best is yet to come"

Well until you have a master plan that will save the world, maybe you should just quietly observe from afar.

Why would I even try to save the world? and more importantly, why should I listen to you? You're just another nobody on the internet just like me. Know your place.

Right next to you? No, right in front of you because all you do is bitch and moan on the internet about other people not doing enough for you.

Trump is more pissed this time.

I do believe that Kamala should be the Biden T-rex and CIA can just be some random dick. Just my 2 cents, I still like the meme

I fucking love this shit.