TheDonald
Communities Topics Log In Sign Up
Sign In
Hot
All Posts
Settings
Win uses cookies, which are essential for the site to function. We don't want your data, nor do we share it with anyone. I accept.
DEFAULT COMMUNITIES • All General AskWin Funny Technology Animals Sports Gaming DIY Health Positive Privacy
1726 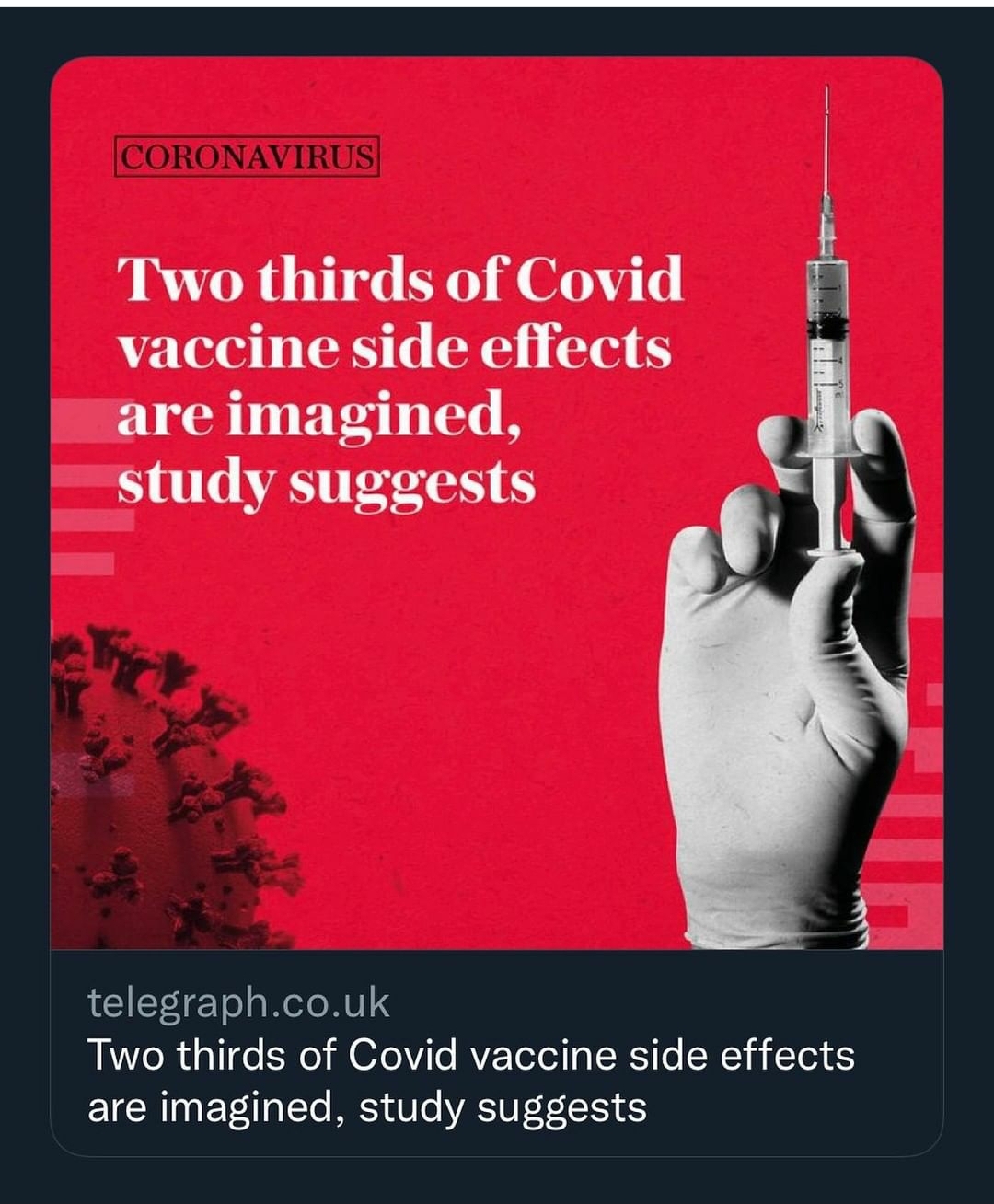 Begun? This is like halfway through "Gaslighting: The Saga".

What's happening here is that a very, very smart man, Dr. Malone, said there is mass formation psychosis on behalf of most of the population that is living in fear....

I’m sure all those collapsed athletes surely are just imagining it. And the kids with permanent heart damage. And the adults with hundreds of thousands in cardiologist bills.

Cardiologists hate this one simple trick

You just have to stop believing in it. No different from the easter bunny.

Lucky for them the heart specialists in msm have declared their conditions mild, pending upgrade to mild death. It could have been worse. Honk honk.

Nonono, those are just the third that are real. There are lots more people faking it that you DON'T know about!

Three thirds of the benefits are also imagined

But how many times do you hear "I had covid unvaccinated the first time, then again after and man the 'vaccine' helped"?

It's newspeak for, "completely made-up nonsense."

Yes it is, and it plays on the religious faith people have in science and also the naive belief that scientists are these pure practitioners, searching for truth.

Tell that to the dead, those with enlarged hearts or murmurs

This “study” brought to you by Pfizer and Moderna

Ah, the Telegraph. The other day they claimed a "man with English accent" held hostages.

'I imagined I had a heart attack, but I actually had one too'

Five out of six Russian roulette players report no problems, had a fun time.

Poor bastards, imagining their heart swelling and blood clots into being.

Your next visit at the cardiologist: Doctor, I have chest pains. - Honey, you are just imagining that, no need to look at your heart.

I just saw a video a few days ago that I'm very surprised to have not learned about here. Look up the name Maddie de Garay. She was a 12 year old girl who took part in Pfizers child study for the vaccine. Her initial symptoms were

She continued to decline over the following 3 months and developed these symptoms:

Pfizer and the FDA refused to acknowlege it and blamed all her complaints on mental illness. This is their MO.

Seriously, just look up her name and watch videos by her parents. They were PRO vaxx, not anti.

And 90% are unreported. Can one of you autist give me the over/under on this.

I offer myself up as one of the unvaccinated control group.

Unreported, not diagnosed, diagnosed by but not attributed to jab by doctor, condition tolerated with no presentation to doctor, the list goes on.

Spoiler alert--they've been saying this to all who have been vaccine injured for the past 100 years. This should surprise no one. Injuries are either imagined or coincidence. This is right out of the public health/vaccine promotion playbook.

Your open heart surgery was just in your imagination

2/3 of the votes for Democrats are legit

I woke up covered in bruises the morning after my Moderna shots, had heart jumps for a month. I definitely didn’t imagine it.

Shut up and take your Xanax, you friggin head case. /s

… I had adult onset asthma misdiagnosed as anxiety for nearly a year.

Your mild myocarditis is all in your head

Next week it will be up to half, then two thirds... gotta do it slow or people might catch on....

Tell that to the courts when the lawsuits start flying.

They will. Expert testimony will describe mass formation psychosis of the vaccinated imagining the same side effects after exposure to right wing propaganda.

So 1/3 are real. Thanks for telling us. We knew this but everything helps right now.

I tried to look beyond the headline and make sense of the actual paper, but it too is kind of useless.

Scroll down to "Proportions of AEs" and you'll see that getting vaccine rather than placebo gives you an extra 11.1 (first dose) or 29.6 (second dose) percentage point chance of having a systemic adverse event. However, the vast majority of reported AEs weren't severe enough to be life-threatening/disabling/requiring hospital care (grade 4). Vaccine AEs were more likely than placebo AEs to be grade 3 though.

Huh, guess I just imagined the hives running all down my arm, side, and back, as well as the week of severe chest pains.

Young kids have ALWAYS been dying of myocarditis. We just didn't call it that back then.

Oh good, so when the jabbed start dying of VAIDS it'll all be just in their heads.

The medical community has been told to label vaccine injury as "anxiety."

Why yes! Those strokes, heart attacks and blood clots were a figment of people's imagination!

Too bad a chunk of them are dead and can't discuss it with you.

Psychiatrists thought about prescribing more hysterectomies, but realized the Vaxx spikes already made that redundant.

Cancel those obituaries, they are only imagining death.

I'll just tell my sister that she imagined she was bedridden for three days after each jab.

This "study" is brought to you by the same "experts" that lied about everything and want to depopulate the world. But you can totally trust them this time. /s

Great! Now do Covid side effects....

Oh! Nope! My bad! Sorry everyone! I was just imagining cardiac arrest and dying. Oopsy!

Anyone who has developed a sudden chronic illness has experienced doctors telling them it’s all in their head. You have to keep pushing until you find a doctor willing to put in the effort to figure out the problem.