TheDonald
Communities Topics Log In Sign Up
Sign In
Hot
All Posts
Settings
Win uses cookies, which are essential for the site to function. We don't want your data, nor do we share it with anyone. I accept.
DEFAULT COMMUNITIES • All General AskWin Funny Technology Animals Sports Gaming DIY Health Positive Privacy
1304 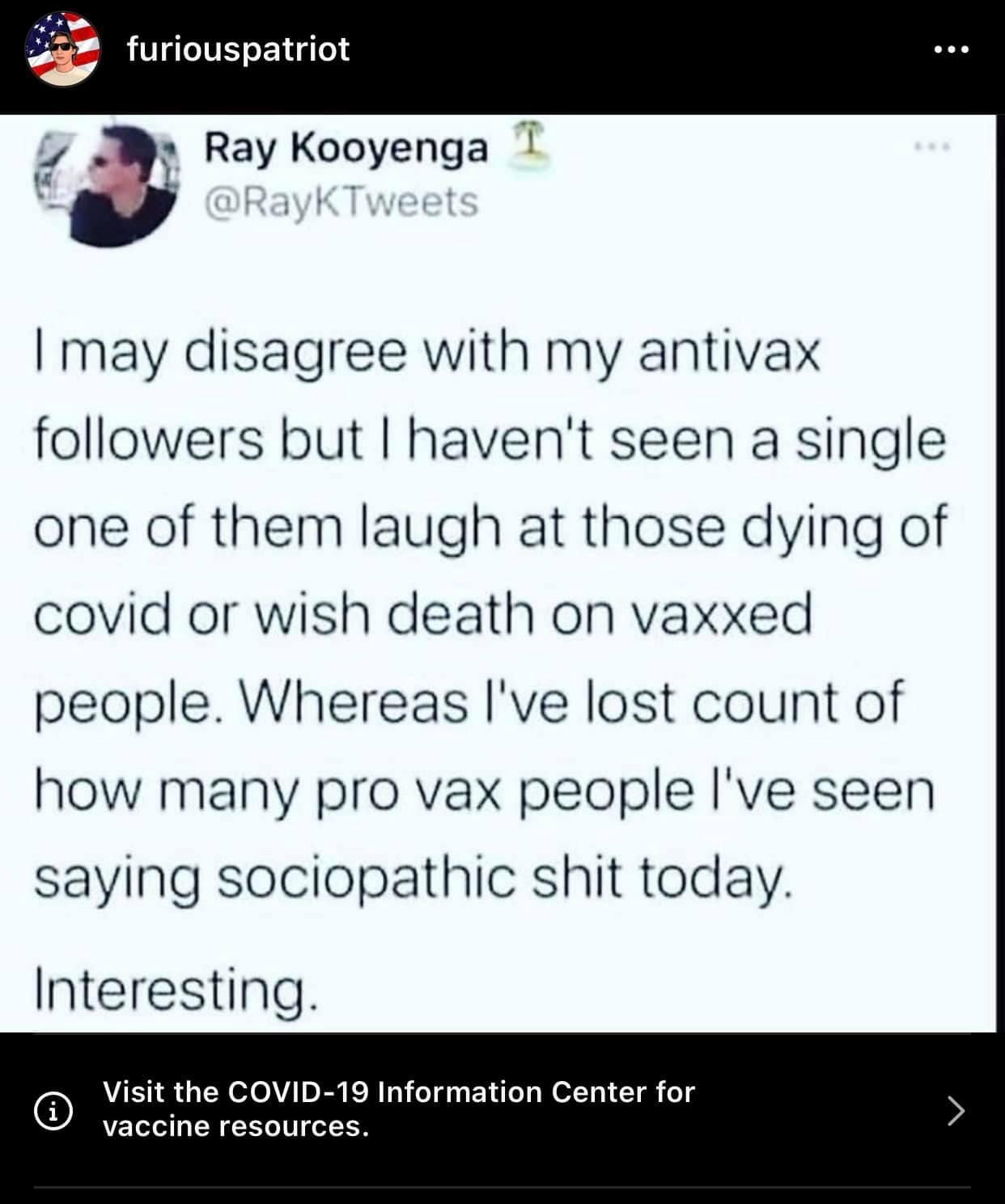 Please, don't play the lefty card of pushing a fairytale that doesn't exist. We routinely gloat over the injuries of the vaxxed and they fucking deserve it. Sometimes children won't believe you that a stove is hot until they get burned.

Us telling them they're probably going to die from their own decisions is different than us wishing they would die because of ours.

I absolutely hold contempt for those who coerced or mocked people based on their vaccination status, or encouraged isolating and segregating public policy.

I wish no ill on those who did it because they thought they had to and moved on with their lives.

Exactly. Also, I tend to live by a code of being a person that I would respect if I met them, and there is nothing respectable about someone wishing death on a stranger.

Honestly, I wish the vax was safe and did work. I still wouldn’t take it or support it being forced on people, but I find no joy in weak people that were bullied into getting a shot against their will then dying from it.

I see a lot of people gloating about deaths here. Yes, warning/telling are very different.

maybe you should stop. These people are victims of a global misinformation campaign, of scale and complexity unprecedented in human history.

When I tried to convince my remote family members on New Year's celebration to not vaccinated their kid, the dad's response was

Do you understand that for me to believe what you are saying about these vaccines, I would have to believe that suddenly, 90% of the countries of this world have decided to collude to commit genocide on their people? And than that this plan did not fall apart for 2 years running?

Because you went off the rails on idiotic "population control" bigfoot/ufo level insanity, when the truth of the matter is that the "vaccines" were nothing but a rushed product meant to enrich a few corporations and empower some in government.

If you had made the argument that way you would not be the considered the fringe kook of your family now. Your use of the constant childish inside boy vernacular like "red pill" just paints you as an inside boy sitting on a computer all day.

Not an attack on you man, just trying to get you find a better way to convince adults.

"vaccines" were nothing but a rushed product

yes, this was literally the only argument I was making. Problem is, normies don't pay attention to any details and they think that these vaccines were in fact separately tested by all these different governments that accepted using them, rather than what really happened - US faked the tests and all other nations just believed that if US company is selling it, than the vaccine must be ok.

I couldn't convince the parents that there were in fact no other substantial testing done aside from that in US and that in said testing the vaccines were given a pass despite scoring a failing grade.

Don't refer to them as "normies" and instead just focus on the money making angle. Ask, do defense contractors make money when our country goes to war? Of course they do, and have we ever gone into any questionable conflicts to justify this sort of spending?

If the defense industry is capable of influencing politicians to enrich themselves, then how the hell is it so unbelievable that the richest pharmaceutical companies in the world could not do the same thing? Not to mention the financial incentives given to every healthcare organization via the garbage CARES act which is just another transfer of wealth.

Call them out of their inconsistency. Government has a proven, non-debatable track record of corruption, but in this one instance we are supposed to believe they are acting in the best interests of the taxpayer?

The mental gymnastics that the average citizen has to employ to reassure themselves should be called out to shake them out of their comfort zone.

Yes, this is exactly what he did. It's really not complicated here. There's no reason to risk a drug on your children for a disease they are not at risk to. I wouldn't give them an experimental drug to prevent malaria or rattlesnake bites either.

maybe you should stop. These people are victims of a global misinformation campaign, of scale and complexity unprecedented in human history.

Those he speaks of want for us to die because we didn't take the "vax".

There is a difference between the two.

I don't have an issue with pointing out their insanity. What I have a problem with is being a disingenuous pussy, which is what the left routinely does. I can easily start going through posts showing the gloat on here, which again, I have zero issue with.

Then go do that, but unless it shows us wanting them to die because they took the "vax" and not for some other reason, then don't come back to me about it.

He said "laugh at those dying from covid", we don't because we don't consider it to be a dangerous disease.

And he said "wish death on vaxxed people". Unless you want to do the same thing that the leftist fuckhead do when they count covid deaths, then you have to show we wish them death because they are "vaxxed" and not for some other reason like them being authoritarian pedos.

I'm fine with most of the people it kills because they are out of shape, fat pieces of shit who refuse to do anything to have health bodies, which normally shrug this disease off as nothing.

I don't mind a culling of the fat. The fat are a blight.

Some might gloat, but i wish the vaccines were safe, i really do. I would take being wrong and looking silly over someone needlessly dying. But the reality is we have the difficult task of going against the narrative because the vaccines are dangerous and worse they are issuing an era of tyranny

Then lying about our behaviour just to make our side appear more nobile is not the way to do it.

This is exactly it. I hope the extreme predictions about the jab aren't true. Virtually all of my family and friends are jabbed. I don't want bad things to happen to them and I certainly don't want to live the rest of my life without them. I can't stop worrying about it though to I'm glued to all the "news" about it because I want to know.

Those who do, do so unwisely.

“Don’t rejoice when your enemies fall; don’t be happy when they stumble. For the Lord will be displeased with you and will turn his anger away from them.” ‭‭Proverbs‬ ‭24:17-18‬ ‭NLT‬‬

Maybe a comedian hired by CNN that held up a severed head of Trump contributed to it some? Or how about people balling out crying and flailing around when Hillary lost.

Nope. And the long-running play where they murdered a Trump “Caesar” didn’t contribute (https://www.breitbart.com/entertainment/2017/06/06/trump-stabbed-death-central-park-performance-julius-caesar/ ), nor did DeNiro repeatedly saying “Fuck Trump” at the Oscars. Nope, the left has been peaceful and tolerant, just like they were in the Summer of Love “protests.”

I came here to say this. Tho we are laughing because they usually say a bunch of toxic evil shit before karma wrecks em.

Yeah, i'm not gonna laugh @ randoms dying from ignorance or felt forced to get it.... But for the special shitty folks I will not feel a ounce of sadness. I'll reserve laughing for the truly evil individuals. And while i may laugh at a ironic vax loving tirade post before passing away of vaccine complications. I still will not be happy or laugh specifically because they are dead.. But i also won't feel sad.

Because that guy is just a normie victim of our evil bastard 'leadership'. If I had my way I'd line every god damn big pharma exec and their lackies against a wall and blast em with a shotgun one at a time.

sorry, but I don't feel any sympathy for the vaxxed, boosted and masked who still get covid.

Well we are really laughing at the vaccine deaths who die from the vaxx not the wuflu.

I have one of those psychotic alcoholic libtards living below me, and he's making life as about as difficult for me as one possibly could. I wish him the best, but in Yemen or something, not here.

Next time he does some stupid shit, just wave and say "yeah man". Only you and us frens will know you mean "Yemen".

If you actively push the mandates I want you to fucking suffer.

Fuck them. I hope they die choking on blood.

Yeah, kinda sad tbh. I thought we were better than them, but I guess I am in the minority that think we should walk the high road and not be lunatics wishing death on strangers over politics (besides communism, I legit want them dead).

You’re not in the minority. The lunatics are, and every side has its lunatics.

Yeah, it's because you're bad people.

LOL. I laugh every time I see a faggot commie die from vaccines.

That's just because he doesn't hang out on patriots.win.

If I’m being honest, I have to say that I wish death on the vaccinated from time to time. Not all of them. But many. It’s their stupidity that’s prolonging all this nonsense.

I’m proof this is false. I’m hoping the vax kills everyone who took it. I’m willing to sacrifice the people I love if it kills off those who pushed it on them.

I have to humbly disagree with this entire post. I used to suggest that people here refrain from stooping to the left's level, but that was an exercise in futility. Both sides are from the same cut of cloth sold at a different brand.

Right, because wanting to genocide the entire Middle East and gun down anyone crossing the southern border definitely qualifies as being much better. Same cloth, different store.