TheDonald
Communities Topics Log In Sign Up
Sign In
Hot
All Posts
Settings
Win uses cookies, which are essential for the site to function. We don't want your data, nor do we share it with anyone. I accept.
DEFAULT COMMUNITIES • All General AskWin Funny Technology Animals Sports Gaming DIY Health Positive Privacy
2042 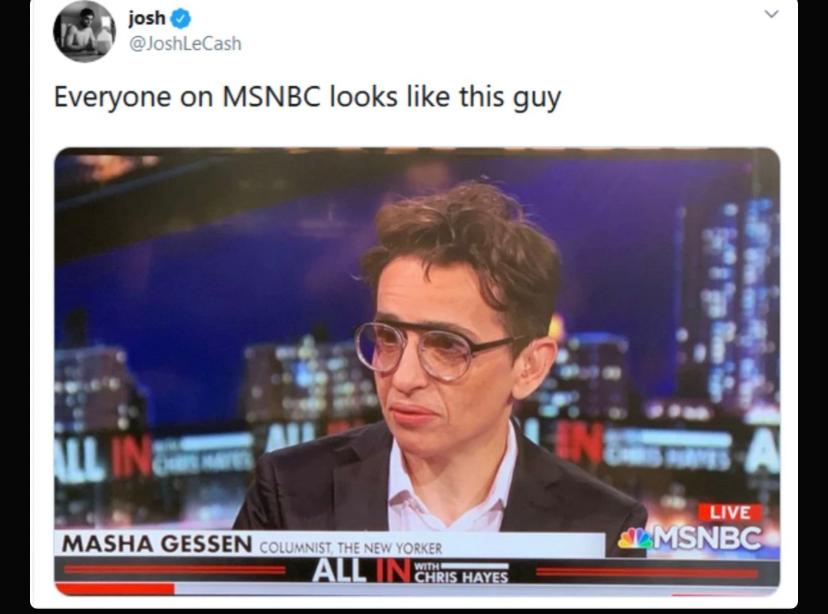 Looks like if Rachel Maddow and Steve Buscemi had a child.

For crying out loud, two men can't impregnate each other.

This is probably the most transphobic thing I ever heard.

Shake out the gay!

Sneed sells feed and seed which is perfectly normal. Chuck, on the other hand....

And then Woody Allen banged the offspring when she was 12.

Well soon-yi was adopted so I think he had that angle the entire time. Never trust celebs that adopt it always turns to shit.

Remember those commercials where they fry an egg and say "this is your brain on drugs"? This is Rachel Madcow on meth.

That’s what I was going to say.

Initially read the subtitle as "Communist, The New Yorker"!

Oy vey, that's what the height of intellect looks like, goys!

Hobbling around coming after us.

The New Yorker and the NYT are goblin lairs.

No real American has the name "MASHA GESSEN".

btw it's not a dude it's a dyke, all butch dykes age badly & dress like dudes

That’s a guy? I thought it was Rachel Madcow. Oh wait…..

Looks like the face of all the manufactured crises on earth.

All the men have a buzzy voice like Chuck Schumer, Alejandro Mayorkas, and Merrick Garland. They were all stuffed in lockers and now are in positions of power.

Ever heard john brennan talk? I had to do a double take when I saw a clip of him talking. He looks like some meathead thug but he talks like an effeminate san francisco yoga instructor.

By buzzy you mean Jewish than yep

We sure that's not a woman transitioning?

Wikipedia says it's non binary and has 3 children, so yeah, female to male. What a world.

I believe it is.. we need a better shot of that throat (even though you can shave an adams apple off these days)

Is that Pat from SNL?

Back when SNL was funny some of the time!

Oh Vey! Shut it down!

"Guy"? Guy... how dare you presume gender and pronouns! Well, I never!

Looks like Maddow had her lips blasted with silicone.

Kill it with fire!

The 80's called. Wall Street has a ledge for your up jump off of. Looks like the friend in Wolf of Wallstreet. Smoke crack with me bro!

Imagine getting ready for your public appearance, thinking, “how can I most effectively confuse people about my gender…?”

like when the human suit doesn't fit you, and your reptilian features come out of the suit.

Are you sure that’s a guy?

If you look it up, it now goes by "non binary-trans" and dresses like a man. I had to look it up because I couldn't figure out what was going on with it.

I love that due to deadnaming nobody not in the know reading this thing's biography would have a fucking clue as to what's going on.

Save your bacon grease people. You're going to need it.

ahhaHAHAHhah......Person looks JUST like my boss whom is the only far lefty i know, THIS is affirming of something !!

That explains a lot about the new Yorker.

Have you seen the Oregon voters pamphlet? Holy shit I swear that “people” who run for office in this state are another species entirely.

I know it's on the conspiracy fringe table, but the more and more I see these damn things I can't help but come to the conclusion that they aren't like us at all. I just can't help but look at that pathetic thing and think to myself what the fuck is it. pokes with stick

Even Gilbert Gottfried thinks this guy looks too semetic

Read the early life. It’s like a lefties “build a character”.

“Gessen was born into a Jewish family in Moscow to Alexander and Yelena Gessen.Gessen's paternal grandmother Ester Goldberg, the daughter of a socialist mother and a Zionist father, was born in Białystok, Poland, in 1923 and emigrated to Moscow in 1940. Ester's father Jakub Goldberg was murdered during the Holocaust in 1943, either in the Białystok Ghetto or a concentration camp. Ruzya Solodovnik, Gessen's maternal grandmother, was a Russian-born intellectual who worked as a censor for the Stalinist government until she was fired during an antisemitic purge. Gessen's maternal grandfather Samuil was a committed Bolshevik who died during World War II, leaving Ruzya to raise Yelena alone.”

In 1981, when Gessen was a teenager, Gessen's family moved via the US Refugee Resettlement Program to the United States. As an adult in 1991, Gessen moved to Moscow, where they worked as a journalist. They hold both Russian and US citizenship. Their brothers are Keith, Daniel and Philip Gessen.

Oof looks like the spiderwick chronicles shit just got real

That is a contender for one of the most Jewish looking people I have ever seen.

That's the Primarch of the entire MSNBC legion.

Nah, Primarchs are superhuman, that thing is sub-human. What I believe we are looking at here is a slaanesh cultist in the middle of it's gradual transition to a fully demonic form. A human demon hybrid, like a low level one though. Nothing like a Primarch.

Inbreeding is bad, even for the chosen people.

A ma’am or a sir, accept him or her

SNL predicting the future back in the 90s!

What the hell is even that?

But seriously is that a male or female?