TheDonald
Communities Topics Log In Sign Up
Sign In
Hot
All Posts
Settings
Win uses cookies, which are essential for the site to function. We don't want your data, nor do we share it with anyone. I accept.
DEFAULT COMMUNITIES • All General AskWin Funny Technology Animals Sports Gaming DIY Health Positive Privacy
2095 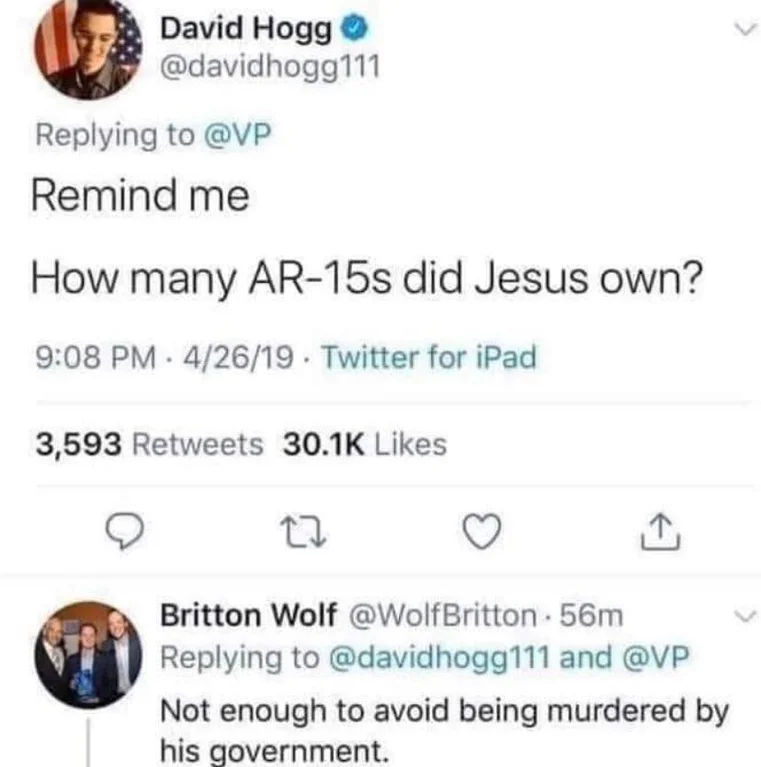 But this one never gets old.

Actually, this is the only one I dislike, just because the point of His sacrifice is that it was voluntary.

Sure, but Jesus did not commit suicide. He was murdered by his government, ratted out by a traitor, dragged and crowned by soldiers, and the people watched it happen.

True, but a gun wouldn't have saved him anyway since Jesus intended to die. He wouldn't have fought back even if he did have an AR-15.

This is true, but we aren't arguing with Christians. These are evil leftists that intend to use our values against us. They'll try to argue using our belief in God, while not believing in Him themselves.

I'm sure they'll be surprised when Jesus comes back to conquer during round 2 instead of to suffer and serve as He did in round 1.

zombie jesus isn't coming back to conquer anything, cletus.

Peter fought back, though. Cut off a Roman soldier's ear with his sword.

And Jesus rebuked him for it and then promptly healed the wound.

Because it wasn't his place. Rome may have fallen but Christ endures forever.

Correct, the Bible clearly states Christ gave his life as sacrifice for our sins. No one killed the Son of God.

People killed him and he willingly went.

Both are true. Martyrs are not out committing suicide by government.

Personally, I think the Jews really had no choice. Blasphemy is punishable by execution. They just didn’t want to be the executioners lest they be unclean for the Passover rites. The whole situation is strange - murdered by Romans in a Roman way for breaking a Jewish law so he could be killed at the same time the Passover sacrifices would have been prepared…

God’s own law required death to any claiming to be God. So God created the circumstances around his own death.

They were corrupt swamp creatures of the time. Jesus threatened the system.

Y'all haven't read a Bible? Jesus willingly faced death to absolve us of our sins. This is ignorant.

I feel like I should watch his twitter feed every day because he always makes these posts that he thinks are so witty and urbane, and people pound him every time. If he had any self-awareness he would have killed himself by now.

It's funny... but you do you really think the son of God couldn't have saved himself regardless? He allowed himself to be crucified to fulfill the prophecy and purchase our salvation with his blood. Amen

While that's true, Jesus did not commit suicide.

He was killed and crucified by the government and their soldiers.

He didn't impale himself.

yes, Jesus Christ was just like Jefferey Epstein. did this entire forum get taken over by satanism overnight?

And.. the story includes the obvious detail. Of COURSE his disciples were armed. Why would they not be?

When Jesus' followers saw what was going to happen, they said, "Lord, should we strike with our swords?" And one of them struck the servant of the high priest, cutting off his right ear. But Jesus answered, "No more of this!" And he touched the man's ear and healed him.

So.. yeah, not only were they armed, their instincts were to use them against a representative of the Roman Army. Jesus stopped them, healed the man, then allowed himself to be arrested... what you describe is precisely what happened.

Aw, c'mon man! Be nice to the little twerp (had to smile when I saw you typed that word). He probably has dain-bramage from all the swirlies he suffered in middle school.

Did he get one of the experimental injections? 🧐

Probably, but he’s also just a faggot so I was talking about regular old butt-AIDS

[Jesus] said to them, “But now if you have a purse, take it, and also a bag; and if you don’t have a sword, sell your cloak and buy one. It is written: ‘And he was numbered with the transgressors’; and I tell you that this must be fulfilled in me. Yes, what is written about me is reaching its fulfillment.”

How many fake followers does this nitwit have? My guess is his account nearly goes away with the Twitter bot purge

When Elon Musk was moving forth with his Twitter bid, I saw Triangle Head complaining in his tweets how he had lost tons of followers. This was right when the bots were getting cleaned out.

Jesus was not murdered by his government.

Jesus was murdered by jews.

The Romans did not see a crime and did not want to kill Him but the jewish mob demanded His death. In order to prevent rebellion and rioting Pilates washed his hands off it and gave the mob what they wanted.

Jewish recalcitrance was what killed Jesus.

A bunch of seething woketards who can’t accept dissent, forced the government under threat of force to do their bidding. Remind you of a certain black clad organization?

At the behest of lying, crooked Pharisees no less.

John 2:15 (KJV): "And when he had made a scourge of small cords, he drove them all out of the temple, and the sheep, and the oxen; and poured out the changers' money, and overthrew the tables;"

He made a scourge and used it to drive people out of the temple.

This is the Messiah, making a weapon and using it violently to obtain a result. Why? Because the weapon gave Him physical superiority over the money changers. It put the Messiah on equal grounds with multiple adversaries who otherwise might have overpowered and subdued him.

Sounds to me like Jesus Christ was tacitly endorsing weapons that equalized individuals of differing power and ability.

How many bicycles did he ride to put himself at the scene of a tragedy?

Considering all his followers had swords and daggers, the then modern day equivalent, basically every member of the religion.

Remind me how many abortions Mary had.

Why would you need a weapon when you’re the entity that created all existence?

Hogg is a pedophile

By that argument, every government should immediately surrender all their guns.

If they were available at the time he would have sold his cloak for one.

EDIT: Jesus volunteered to embrace our human evil. I do not so volunteer; because I'm not able, not worthy, and not called to it. I'll help you out of evil, as I am called to that; but I'll also DEFEND AGAINST YOURS.

Let's be honest. He didn't stay dead. He gave up his weekend.

They're both too freaky-looking to go far.

So this argument wouldn't work on me but if I use it on you, maybe you'll do what I want

Pretty sure Jesus flipped tables, whipped people, and told his followers to get swords.

Harvard educated used to mean something

murdered by his government?

ARs weren't even invented yet. His question is retarded.

Let him who has no AR buy one.

And how many guns did the Indians own? ZERO! That's why this is America. Because they qere too stupid to invent weapons that could compete with even shit built in the midevil era.

Sad that he didn't get shot, and instead some other real life was lost. He's just a commie robot.

He didn’t get shot because he wasn’t even there when the shooting happened. He’s a lying commie robot.

Very likely. His dad is a glowie.