TheDonald
Communities Topics Log In Sign Up
Sign In
Hot
All Posts
Settings
Win uses cookies, which are essential for the site to function. We don't want your data, nor do we share it with anyone. I accept.
DEFAULT COMMUNITIES • All General AskWin Funny Technology Animals Sports Gaming DIY Health Positive Privacy
2254 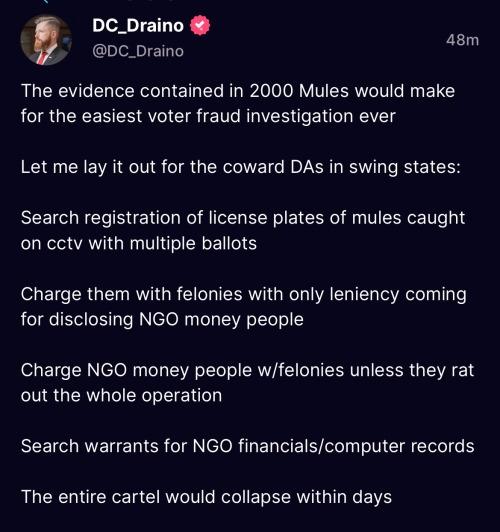 Just like with Epstein... who obviously did not kill himself.

Exactly. The people in charge of enforcing the law did the fraud. There is no other explanation why no investigations ever happen.

FBI launches "investigation", result is a slideshow at one of the perpetrator's office birthday parties where they all pat each other on the back and laugh

Theyre not going to prosecute themselves.

Bingo - “you can’t tickle yourself” - that’s the meme for anytime we think like the IG is gonna do some reforming or the DoJ is going to prosecute election fraud or whatever.

Like it's been said. If you want the job done right....

“Coward DA’s” is the operative phrase.

I'd like to think I'd have the balls to do the right thing.

Knowing they'll send a cleaner to kill you're kids and make you watch is a hell of a motivator.

it's not even that complicated lol

there doesn't need to be any investigation, everything was done in plain sight

I've been saying what he says here for months. Just use the standard techniques they use on drug rings and organized crime and the whole scam collapses. The problem is that these AG and DAs know how easy it would be and that even the normies would demand that Dementia Joe be removed from office and they want nothing to do with that. Easier to just gaslight everyone into thinking that election fraud is a conspiracy theory.

The AG in the Red states need to request the information for their states and do analysis of the mules in their state elections. They can then find who the people are via their cell phone records. I'm sure the swine in Harris County cheated. Start in the Red States and move on from there.

Exactly. Don’t water the bare spot in the yard. You water the fringe grass and it will thrive and fill in.

Lol what? You plant new seed over a bald spot and then cover it with straw , stupid faggot

While I agree, the Rs have allowed the machinery of even the Red States to end up in Blue counties/cities.

There's plenty of examples of what I mean, but I take this as the most egregious:

Atlanta, Salt Lake City, and Houston have (added together) some 200+ years accumulated since the last R mayor. And the capital cities of those states are probably in the same boat, no?

i can't speak for the other 2 cities, but barring a huge demographic or cultural shift, Atlanta will never have an R mayor again. even sort-of-sane Democrat candidates are swiftly destroyed by the racial grievance machine. and the mayors basically loot the city during their terms

I understand the demographic difficulty, but the Red higher levels of government have simply taken that as "Well, it's inevitable, let's concede". This is hw the R party treats all cities. "Well, I'll ignore them, then try to convince them to vote for me by just saying some shit"

I would be passing "red" things on the city . "All cities (pop > x) within the state must have a top-tier gun range", and "Firearms competitions", and "Cops must get civilian firearms certification" (see: Red Cross Lifeguard cert sort of thing), a state educational test that specifically asks things the Left lies about - that also ties up the serious money to the schools...

And, as much as it can be called "pandering", I'd do a lot of other stuff too. Not insane "I feel your pain", but "Self-defense for girls ... prize firearm." Serious rewards/bounties actual anti-gang units. (Not the normal 'sheriffs and bandits collude' sorts that cities haul out cyclicly to 'get more funding' and then ignore until the next election)

"But all that spending" ... "Look moron, the D's have shown they don't have any concerns about devaluing the dollar completely. The one drop of restraint we've been managing is pointless, the only thing you can do when you're in power is at least aim the firehose of debt properly."

Wake me up when it happens

See you in two weeks.

The fact that this is not happening shows just how much of a friggin disgrace our elected officials are.

Believe it or not, this is completely feasible in an honest God-fearing society. And we would find the cartel surprisingly small.

Of course, that would only happen if this was a problem they wanted to see fixed

This guy is a fucking idiot that serves no purpose.

All of the swing states they stole have controlled DA's that are openly treasonous individuals. NONE of them are rag tag people that "just want to do the right thing".

These people are there to cover up crime. Telling them how to charge criminals is fucking useless.

Not every DA gets an oversight committee

Except both parties are in on it.

Can other states send their people to go do that because the harm caused has impacted all states?

I mean that's how you get Clinton'd right there

The consequences of this being proven in court instead of some “Dinesh Documentary” are so severe that ThEy DoNt WaNt To KNoW tHe TrUTh.

Rinks no power people all have heads buried in the sand.

You can’t tickle yourself!

The cartel would not collapse. The mules would get Hillaried in a matter of days.

So what? Fewer jackholes willing to steal, it will stall them while they find more and give the investigation more time to connect the dots.

No serious investigator would take the case though!

Except the DA's are not coward's. They are funded by the same marxist's that fund the criminal NGO's.

This needs to be done at the state level in each red state. My guess is it will lead to deep in the DNC.

No one is charging anyone, especially not those who'll 'investigate', preferably in McDonalds with coffee and fat doughnut

Then hang everyone involved. Not even kidding. It’s treason and anyone who attempts to do it again should learn from the example. The constitution calls for a speedy trial and an execution.

Imagine thinking the people in charge, dem or repun, actually give a shit about justice.

Womp Womp his fee fees are hurt. Just charge everyone that voted D with Felonies

Don't wait for law enforcement to do it. The only justice left in the USA is vigilante justice.

There is just on problem with the plan: The first people they bought were the DAs

Slight flaw in that plan: the local and State DAs are all in on the steal.

If anybody makes the slightest move toward prosecuting the mules, Merrick Garland will send his goons to shut it down as a racist voter suppression. And multiple Obama appointed federal judges will issue injunctions that public officials have to get the judges' official sign-off and permission before watching any more D'Souza documentaries for the next 15 years.

Right, but the people in on it aren't going to do it thus it's not going to happen.

Why do people continuously believe that the government is going to fix itself?

Since the FBI and the DOJ are part of the cartel, that will never happen.

Unfortunately, our own judicial system is in on the fraud.

Problem is both parties are guilty of ballot harvesting. IMO democrats are worse, much worse, offenders. But the Republicans hands are bloody too

There has got to be at least one brave county sheriff, backed by a good DA, somewhere amidst all the theft. State law can be wrought upon these folks. I am sure it does not have to be federal, correct me if I am wrong...

Is a movie supposed to be evidence in a court?

Using the same Geo fencing to prosecute J6 patriots, so...

If they didn’t do it before, why would they do it now after a movie came out about it? They are gonna bring the movie up in court?

Wouldn't they murder the investigator

Just one single arrest can bust this thing wide open. It would be a dream case for a DA 15 years ago.

EPIC SOLUTION...but the FBI would seize all the evidence and then "dismiss"... BBBBBBBBBBBBBBBASTARDS

You forgot one critical detail; IT IS CLOWN WORLD! and there is no escape.

It will never happen.

If it does, all the evidence will be put in a federal building somewhere and then it will be OKC'd like all the files on Hillary were.

They'll do nothing. Also it should be going to AGs not DAs.

That would destroy most of Congress and the banking system.

No judge in the US has ever taken up the case and declared a ruling on it.

While these are all fun fantasies about "the bad guys" being brought to justice, it is tragic how out of touch even smart people are about the state of things.

Foreign actors have taken nearly complete control over almost all of our systems. Some of them hold public office and have dual citizenship and they flaunt their loyalty and priority to their own people - non-US Citizens.

Those who speak out about this publicly are immediately punished and tens of millions of Americans rally around the injustice.

There will be no justice folks. There will be a few sacrificial arrests, a few ridiculous sentences, delayed appeals, and then a reduction in sentence that never makes the news.

Complaining about this shit like something is going to happen is about the most bizarre phenomena happening at the moment. The only thing worse is the left who celebrate their own oppression - past, present, and future.

To those ridiculing the left, you are one tiny step to the right. You are close to them than you realize. Until you recognize that, there will be no changes.

LE from top down are in on it most the time

I haven't ruled out crazy shit.

*But I think it's possible to save ourselves in the Midterms, without Durham/Military.

Why won't these fuckers arrest themselves!!!