TheDonald
Communities Topics Log In Sign Up
Sign In
Hot
All Posts
Settings
Win uses cookies, which are essential for the site to function. We don't want your data, nor do we share it with anyone. I accept.
DEFAULT COMMUNITIES • All General AskWin Funny Technology Animals Sports Gaming DIY Health Positive Privacy
1209 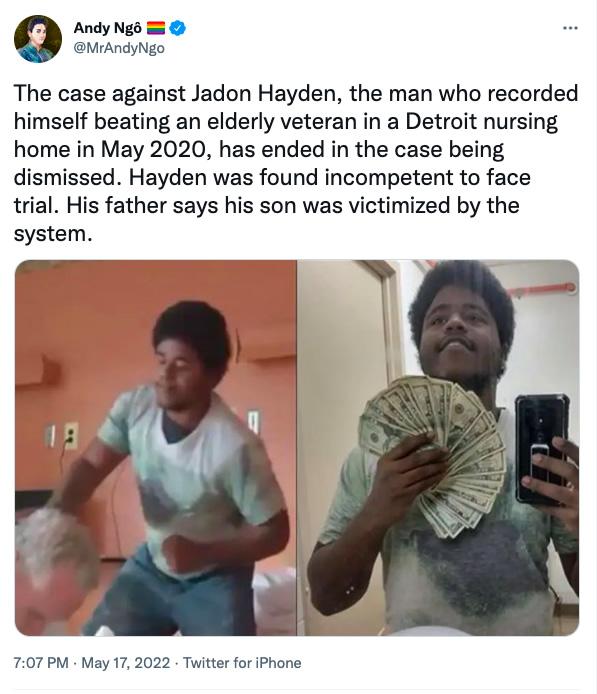 If that was my family member, I would find that person and take care of them. End of story.

No doubt. If that was my father this punk would be dead the day they dropped charges. I wouldn’t even hide it and I would make sure the authorities/media knew exactly why.

no need to sacrifice yourself. they would know

That person, their family and sell their pets. Dogs to good homes, cats to restaurants.

Did you read the fucking story? He was deemed u fit to stand trial, so is in annual institution instead.

He should be hung in the streets. End of story. It’s a stupid governor of that state didn’t put mental retarded people into old folks homes with Covid it would’ve never happened. So why don’t we just hang him instead

Incompetence is no excuse.

In fact, it should have been one of the charges.

Yup. The judged ruled he was too savage for white man laws to apply.

I wonder why his next victim will be now that we've trained him that chimping-out is acceptable?

Judge admitted him to a mental institution instead.

Didn't he end up killing that old man?

There are two groupings of felons here.

The second and far more dangerous felon is a state actor, and so the perpetual quandary of how do police arrest themselves comes up. They dont, so the criminals who made this happen walk, and if they walk, the thug gets a pass as well.

Imagine a child care center that thought putting unsupervised starving pit-bulls in with toddlers would be a good idea, and also think they ought skip out as free men and women with infinite ability to dodge all charges when the inevitable happens. That's the category of evil at work here.. nasty people.

In Washington state a parole board found a man that murdered 3 in a bar in 1980, would have been 5 but 2 ladies were able to slip out of an extension cord noose before completely chocking to death after he left them hanging in a bathroom. Should be released from prison as he no longer poses a threat to society. Jay Inslee has the final say so I’m sure he will be out on the street soon. 2 of the men he killed were tied up and put into a chest freezer, after leaving the bar he returned, opened the freezer, men still bound and simply shot them both in the head. He also raped the 3rd victim before killing her.

Edit: the problem here is not just the Governor, parole board, judges, DAs and AGs. The system is corrupted to to the core. One thing over looked is the BARs, they score these lawfare types with a rating they can campaign on, when you stack the BAR with nothing but radical defense attorneys, now you have and actual systemic problem.

For a while democrat cities were setting all the murderers and rapists free, with covid being the excuse. No hearing, no submission contesting evidence, or verdict, or parole or anything, just letting them walk out.

At least one of the killers they set free killed again within days of being released. You think the people that set him free were charged for that? Imagine being the DA, cops or prosecutor who put this piece of shit away only for him to be set free by lunatics who just shrug when he kills again.

Democrats have terrorists and criminals as their voting/supporter base.

Could not have described their voter base better myself! This is why I’m subscribing more to the fact we can not vote our way out of this, these people are blood thirsty and hell bent on killing, election fraud is nothing to them.

That retard that sparked race riots for passing out drunk in a Wendies parking lot then fighting police and pointing a cop’s taser at his face ALSO was released by these democrat policies due to “covid”.

And the retards who fight to let these shitfaces run free- need the chair too.

And those who seek to put such corrupt justices in power- they also need the chair.

The chair for punching someone? He's going to a mental institution, which is where he belongs.

He belongs in a wood chipper.

It's stuff like this that makes me more resigned to taking care of my folks at home when they get older. They took care of my grandmother at home until she passed. No wonder my grandma didn't want to go to a nursing home! I hope street justice finds this douchebag really quickly.

I don't care how much sponge bathing, wiping, feeding and lifting it takes. My parents will never see the inside of one of those miserable places.

I believe in situations like this chickens will ultimately come home to roost. The father will soon have a reckoning and it will be glorious.

Fellow pedes, I implore you protect the vulnerable. All children and elderly should be taken care of by immediate non degenerate family members. Putting them in babysitting and elder care is playing Russian roulette with their lives. NO stranger can do it like you can. Take note and act accordingly.

My poor uncle was swinging towards the left before he died. Used to talk about how trayvon martin was killed because of racism. Then he got put into a nursing home with a bunch of Haitians taking care of him that he couldn't understand and they didn't give a fuck about him. My dad said every time he went to visit his brother he begged for water and could barely talk. He died before we could move him closer to us.

I sure hope some unhinged or Patriot who has had enough runs into this guys somewhere and something just clicks, i hope this dude gets everything he deserves and more!!

Why haven’t all the Patriots had enough yet?

What? What the fuck does this have to do with anything?

So why isn't he being locked in an asylum till he gets the care he obviously needs?

Why isn't he swinging from a tree?

"They should have known," said Jadon Hayden's attorney Brian Berry. "I think the facility had an idea of who Jadon was and what type of treatment he needed. I think they knew, or had a history, that he was schizophrenic and it should have been handled differently."

Berry said while the charges were dismissed without prejudice, he thinks it's unlikely the case will be refiled.

"Jadon's condition is not going to change very much," he said. "Unfortunately, both the victim in this case and the defendant were both in put in a bad situation."

Wasn’t this the kid that took videos of himself doing this and described himself as the “undefeated” champion? Bullshit, the kid knew exactly what he was doing, and if you want to say he’s a schizophrenic nutjob then he belongs in a psych ward for the rest of his life.

He deserves to be lynched. If his schizophrenia can't be fixed then a rope can fix it for him.

liberals are all bad faith actors. They are liars one and all. They don't want to coexist they want you dead.

They aren’t liberal either, they are authoritarian scum.

He looks perfectly competent holding up a wad of stolen money while taking a selfie. He's competent enough to upload the picture online. But he's not competent to face responsibility for his actions. In other words, this is typical.

there needs to be a balancing factor when 'justice' fails

mental or not I would fuck him up if that was my family member....FUCK U FBI.....

I wish the system would victimize me enough to have wads of cash like that.

One who does what anyone knows will destroy a structure is not incompetent. It is deliberate action of an enemy who knows exactly what he's doing and why. His goal is to destroy the structure.

He doesn't look too incompetent posing with all that cash

This is fucked up

Anyone in the area want to go Punisher on his evil ass?

Dismissed meaning he did nothing wrong according to the law. So, what was his possible sentence? Anger management? Mandatory mental health treatment?

No sentence because the activist judge dismissed the case!

find him and kill him. fuck the system. its broken. time to start it all over.

#BlackPrivilege is happening a million times more than any so called White Privilege!

If white privilege were real than ZERO mulattoes would identify as black.

Somewhere right now, I would bet that there is a bullet with his name on it.

Dox him, or just admit defeat

I feel like vigilantism will make a comeback at this rate.

Criminals getting let off with a slap on the wrist after really hurting people seems to happen more and more often.

What activist judges fail to realize is that Human nature can turn very dark, and when they fail to serve justice, the punishment these criminals will receive outside the law will be far worse than an actual fair punishment ordered by the court.

The judges will have no one to blame but themselves for failing their duties and making the public lose confidence in the law.

So what this case is saying is, joggers are retarded?

Ono…poor jogger… Dogs get put down for less…

how can you be found incompetent to face trial?

He's too savage to be judged by civilized laws I suspect.

that makes no sense, even dogs get put to death if they bite someone, can't really call them competent to stand trial either.

The difference is that dogs are capable of feeling love and empathy.

He then went on a jog as any jogger would.

I remember this video disgusting.

Victimized by the system is more important than being victimized by being severely beaten while incapacitated?

Is this going to be their excuse from now on?

"I'm not competent to understand the system. Case dismissed"

They kill our elderly, kill our children, rape our women and yet every day you all watch them play sportsball.

"Victimised by the system", this defence, available only to those scoring higher on the Oppression Olympics than the alleged victim, coming to a court near you!

Ohhh heeeee’ssss the victim. Got it.

"Incompetent" is the legal lefty strategy to get POC's out of jail free. Of course, in reality the racist left really does see all POC's as incompetent. But all crazy white people must be punished.