TheDonald
Communities Topics Log In Sign Up
Sign In
Hot
All Posts
Settings
Win uses cookies, which are essential for the site to function. We don't want your data, nor do we share it with anyone. I accept.
DEFAULT COMMUNITIES • All General AskWin Funny Technology Animals Sports Gaming DIY Health Positive Privacy
404 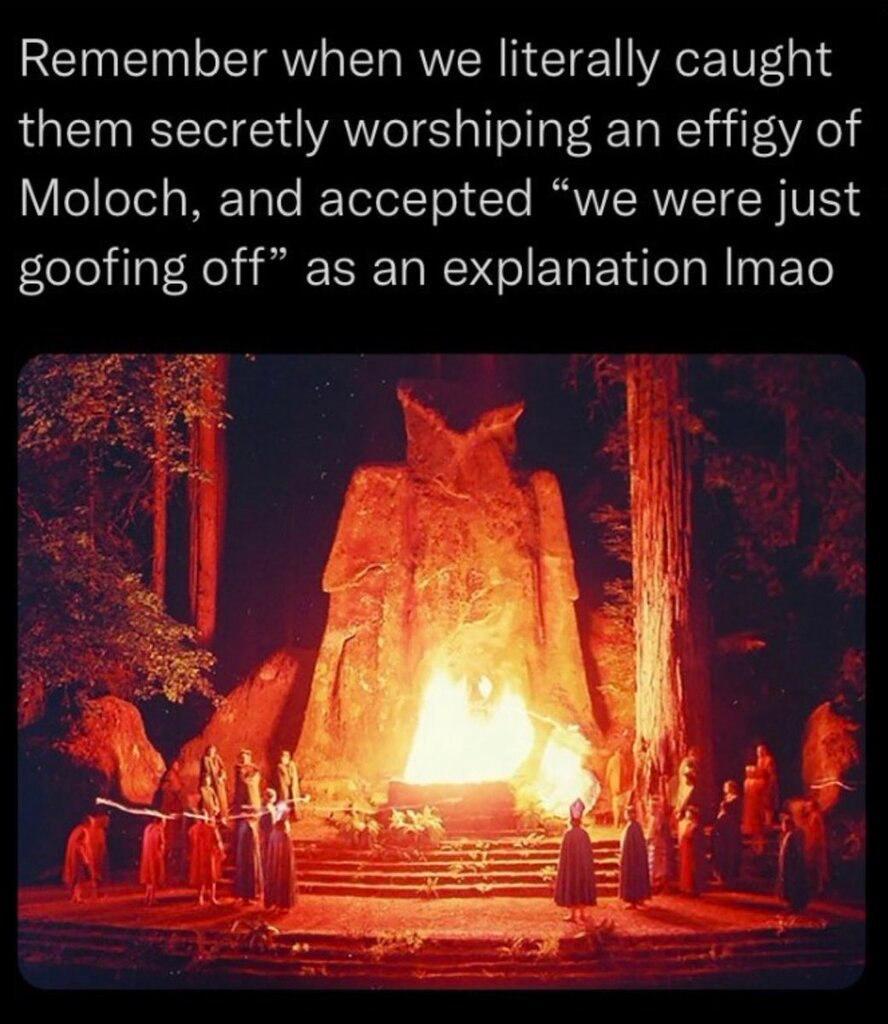 Wasn't one of them looking for the tomb of Gilgamesh recently? Probably what the whole Iraq thing was about.

Some scholars believe Gilgamesh to be the same Nimrod from Genesis, a great-grandson of Noah. They believe Nimrod - which translates as "rebel" - was not his name, but an epithet meant to replace it as an insult in kind to his insult against God, whom Nimrod rejected.

they aren't quite right, Gilgamesh most likely came from Cain

dont know where they're from, but i know they exist

If Americans were in Korea, that means we were already here before your time frame?

wtf r u on about

iTs uS wHo R oFfWoRlD

So you think humans came to earth a few decades ago?

I think they meant the inverse

We came here in 2012, the simulation implanted memories to make you believe otherwise

This isn't Moloch. You think it's Moloch because...? You were told that once in an internet meme or something and it just stuck?

Classically, Moloch was always depicted as a bull. Some scholars now believe that Moloch wasn't actually a Phoenician deity or a cognate for Baal, as generally assumed, but a type of child sacrifice (the usual deity presumptively being Baal).

Anyway, all that is immaterial to the point: this isn't Moloch.

I believe it's actually Minerva, but it's still creepy as hell.

They actually do this.

They don't hide alien contact because we can't handle it or because there might be mass hysteria... It's because we would know that they answer to not only a foreign government, but a foreign species. This planet is for God and his children, not satanists and their overlords

We're here because we're fallen and need to prove ourselves to God.

If we fail, we'll be stuck here with the Satanists forever. That's Hell.

It could be hell, but it could also be heaven. This is the only world we know of that fills all our needs, does it actually get any better than this? Could it be a lie to tell people that there is a "heaven" so they believe there is something better, a better life out there than what we have? When you think the grass is greener on the other side then you might not be inclined to live the best you can while your here. While we are here we should enjoy our families and help people the best we can and make the world a better place

God made our souls, aliens made our modern bodies. That's why we're here.

In contact? I believe they are one in the same. Top secret clearance from many former soldiers all say there are transportation methods unknown to us civilians

Personally, I think the aliens theme is bullshit.

I think Klaus Schwab is a fan of the graphic novel The Watchmen, and he plans to use a fake alien invasion to unite the nations of Earth in the mass formation delusion necessary to convince us to formally cede our sovereignties to his one world government. (If you've only seen the movie, you're missing out.)

I think the worship of Moloch is a genuine part of the Paganism still practiced by the anti-Christian Khazarians, which are probably the Synagogue of Satan referred to in Revelations. I think the "elite" are attracted to Paganism because they are greedy narcissistic egomaniacal retards.

Both off-world and on-world.

Fallen angels in open rebellion against God. Not aliens, demons.

Well they think they are, that's for sure.

Jesus what the actual fuck is this?

What are they doing where can i find more info?

Basically, upcoming politicians and elites would go to the "grove" and literally get ass-fucked by establishment scumbags, in rituals of humiliation and dominance. They also immolate "props" of mummified children in front of a giant shrine of Minerva (goddess of forbidden knowledge), and shriek into the night sky.

The elites offered all the globalists immortality if they would depopulate the earth first.

That's basically confirmed at this point.

The moon is a spaceship

We live on a farm

I can't prove this false from where I stand.

Nothing can be proven false. The duty of proof is on the claimant to prove their claim true.

He has no duty to prove his statement to me presently. This is no courtroom. I have a choice to inquire or debate if I am curious, or to move along and not concern myself.

I agree with this to some extent.

That would be depressing af.

It doesn't remove God from the equation. God created people's souls and spirits, then aliens tinkered with DNA to create these bodies we drive around in.