TheDonald
Communities Topics Log In Sign Up
Sign In
Hot
All Posts
Settings
Win uses cookies, which are essential for the site to function. We don't want your data, nor do we share it with anyone. I accept.
DEFAULT COMMUNITIES • All General AskWin Funny Technology Animals Sports Gaming DIY Health Positive Privacy
1625

Elon: The attacks against me should be viewed through a political lens – this is their standard (despicable) playbook – but nothing will deter me from fighting for a good future and your right to free speech...Finally, we get to use Elongate as scandal name. It’s kinda perfect. 🤣 (media.patriots.win)
posted 39 days ago by maga_mama_757 39 days ago by maga_mama_757 +1626 / -1 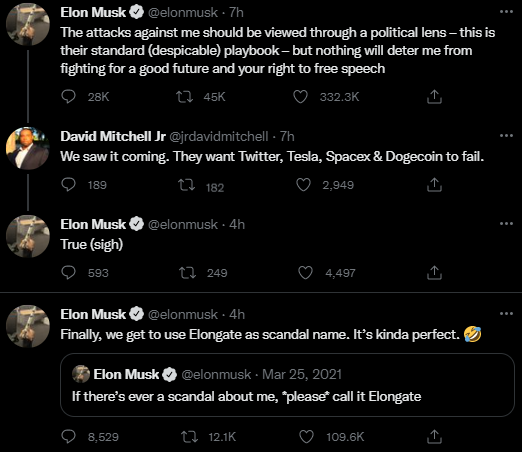 If there's ever a scandal about me, please call it Elongate.

Elon Musk is taking all the arrows right now.

I think he has pretty tough armor.

It's just a shame he's being sheep-herded to party leadership of McTurtle and Kevin McLarthy. Instead of like... idk. Donald Trump as majoirty leader, and thomas massie as speaker.

Conservative, pro-liberty and America-First yet still would be a "unity" ticket. As Trump is MAGA and gets the republicans out, and massie can appeal bigly to "independents" all across the political spectrum while exciting many conservatives as well.

Instead of that... we get Mcarthy and McConell. Sighs...

Elongate does have a certain ring to it.

I wonder to what extent it will elongate?

to an impressive length, to be sure

I hope Elon Musk fucking destroys all the people that hate him.

Stop! I can only get so elongated!

Elon is joining trump in surfacing the left.

They hide in plain sight.

Counter theory. He knew this would break so he "came out" as Republican right before so that people would say "o, must be a smear technique."

Maybe! The timing works for that theory, too.

I didn't see what he said as he's decided to become a republican, though. Based upon past posts he's made, I think he's probably still left-leaning or libertarian but because the far and vocal left has gone batshit crazy, he'll be voting republican for the foreseeable future. I think there's a difference between being a republican and voting for one.

He's definitely libertarian or something weird like that, but I think he's realized the republican party is a better match in this dichotomy we're forced into.

He's definitely libertarian or something weird like that... dichotomy...

The majority of the people here are that, but got herded into a false dichotomy.

Apart of it has to do with how slowly certain information travels (despite there existing the internet, you see how lazy people are) and also how the establishment traditionally chokes out third-parties. It sucks there isn't a proper party (yet?) to represent MAGA.

Ok, let us imagine media is benevolent, then why the story of 2018 only breaks now? I read the story, it is about an unnamed friend of an unnamed women who claimed her friend was offered to do something sexual for him in exchange for a horse, which the women rejected. Maybe true, maybe not, I think many men in power do that. As long as it is not coerced, that should be nobody's business. Besides, damn, it is unnamed reference to another unnamed reference. How dumb this story needs to be. Do we not have enough of those about Trump?

“I just became a Republican yesterday but the attacks on me are political and I’m a victim.”

It might take others time to identify these things but his sob story here is self made and it is quickly becoming insufferable.

Largely it’s designed to keep his position as head of Tesla and Space X.

No one (except socialist Jack Dorsey) asked him to buy overvalued twitter when we knew a bear market was imminent.

No one asked him to sacrifice the Tesla stock price which he knew was a possibility.

Nobody told him to publicly document that he knew there was a bot problem on twitter before he later complained about too many bots.

Im pretty sure he's feigning victimhood here as a tactic and youre misreading the situation.

"I just became a republican yesterday and today there are 12 sexual assualt claims against me. Gee I wonder what changed"

Nothing changed. He got asked about a sexual assault. Then pretended like he didn’t know that was coming.

Its the same bullshit play he pulled with the bots on twitter. Just slightly less transparent.

“Oh I’m going to pretend I didn’t know about that thing I knew about in order to claim victimhood.”

Anyone who does that is scummy, including Musk. Shitlibs do it all the time.

Okay, I abmit it- I f#6ked more than my share of women in my twenties. Now that I'm immune, please elect me "Congressional Grim Reaper."

The real Elongate is the scam that is Starlink.