TheDonald
Communities Topics Log In Sign Up
Sign In
Hot
All Posts
Settings
Win uses cookies, which are essential for the site to function. We don't want your data, nor do we share it with anyone. I accept.
DEFAULT COMMUNITIES • All General AskWin Funny Technology Animals Sports Gaming DIY Health Positive Privacy
1289 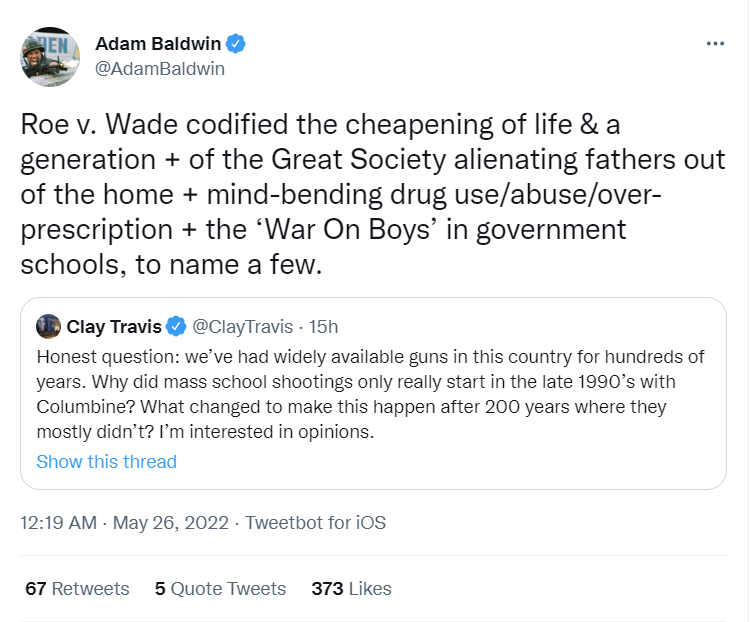 As soon as we started heavily medicating our kids for being … kids, the violence started.

Yup. Medicating kids is a big part of the war on boys in schools, which is part of the demonization of male energy, as is the marginalization of fathers.

WHo would come up with such a dastardly plan?

Imagine getting kicked out of 109 gyms, must be the gyms fault

A friend of mine was prescribed some drugs in middle school/early on in high school because of what some doctor diagnosed as ADHD or something like that. They are in a better place because they stopped taking the drugs they were prescribed. I forgot the exact things they said but basically, the drugs were making them more awkward in the school and having a harder time being what they described as normal. Eventually, they just stop taking them in luck we had some good friends at the time who helped them through it and now our a functional member of society.

Took Ritalin for add adhd starting around 1st grade till 4th. Didn't really help at all. Also got put on homeopathic remedies drops... didn't help at all. Turns out the most likely problem as to why I wasn't doing good in school is because I listened to my parents fighting almost every night instead of getting good sleep. Doctors never asked about home life. Straight to the drugs.

I honestly think the internet shares some blame as well. It made everyone attention whores and I think it's fucking our kids up.

It's fucking us all up as a society, but especially the kids.

Awful what he did, but he knew something was off and had a note requesting his brain be studied. He had a tumor, which caused mental illness. Certainly not the case for every mass shooter, but medications likely play a large role - I’ve seen nothing on shooters’ medical history after each attack...just rants about guns, video games, george floyd, defunding police, funding police, etc...

“How many of you know who Charles Whitman is? …none of you dumbasses know?”

He shot all those guys from the book suppository building?

Removing God from our society & government is where it started.

Yes, this is the root of it all. But it is worse than that.

Many atheists are ok with religious Americans following the decrees of the Lord.

The problem isn’t atheism, per se. The problem is that the Left actively opposes the decrees of the Lord, and has made this opposition their political platforms.

Furthermore, they ridicule these decrees, and the people who follow them.

Still angry at him for what he did to Mel and his countrymen in The Patriot.

He was great in Chuck. Love that show.

That blonde is yummy.

Always wonder if it was him or the writers who wanted the picture of Reagan in his house.

Same. And the bit about life starts with contraception, many pro 2nd amendment one liners.

I can think of maybe 10 actors I'd love to have a beer with, he is on that list.

Conception, not contraception. Otherwise based.

LOL, I must have been drinking earlier.

All the other toxic bs that put in our food

Psychotropic drugs, destruction of the family unit, movimg away from God, copycats from media glorification of of the killers, people have less morals and think human life isn't worth anything.

The lesson the next mass shooter constantly sees is that if you get a high enough score, then your face will be in every paper, every news site and network and everyone will know your name. It a 100% proven effective way to become famous.

The right of privacy gives people the right to pull their kids out of Public school and either home school or private school them.

To way they are killing ROE VS WADE is by killing our Right to Privacy.

They need cause to get or guns. They cant do what they want when someone can shoot them for doing it.

RvW isn't codified though. There is no Federal statute, which is what codify means. All it is, and has been is case law.

This is one of the biggest issues with RvW, if it's so important to Democrats why haven't they had a Congress to codify it in the last 40+ years?

It's simple, the media's obsession with Columbine gave a bunch of demented weirdos the idea and one copy cat begat another, with the media's focus on it intensifying with each event. That's why they use AR-15s even though they're not an optimal weapon for indoor close quarters use. The media never shuts up about AR-15s and always links them to school shootings.

The internet has been weaponized by bad actors.

Putting boys on drugs is to control them and make them more compliant. This was required when both parents started working to have more "stuff". The female teachers needed the boys under control.

Men and boys need to learn willing compliance thru self-discipline so that they retain the edge, when needed, to do bad stuff that is required. It is hard for me to believe how cowardly many younger adult males are these days.

This man needs a job in Public Relations!

And it's when American popular culture began to become degenerate. Rap music glorifying drugs, violence, and shitting on traditional American values. The war on Christianity, the beginning of the assault on the traditional family by gays and their leftist allies. Hollywood and media companies pumping out degenerate trash.

Drugs and the intelligence community.

Upvote if you thought "My Bodyguard" was one of the best films from the early 1980s, and if you think it was Adam Baldwin's finest performance.

Received it as a gift, haven't taken a chance to watch it yet.

Brings back memories of better times in America.

I am also interested in Alec's thoughts on how the Sussmann trial is unfolding. After all, his owners told him he had no choice but to "take his shot" to send a message about how this trial should go. It looks like it is not going that way.

Adam is a different Baldwin and not related to Alec.

took God out of schools. No morals being taught, other than leftist satanism. broken families. CNN. Pedo Joe.

nail on the head

Also violent movies, music, video games. Toxic shit on social media. Nihilism wherein a young man has nothing bigger than himself to believe in.

Also, I think the press coverage of the shootings has something to do with it. They essentially glorify them for weeks talking about the shooter, etc. This just leads to more copycat style incidents.

Does anyone remember Kip Kinkle? Happened a over a year before Columbine. https://en.m.wikipedia.org/wiki/Thurston_High_School_shooting