TheDonald
Communities Topics Log In Sign Up
Sign In
Hot
All Posts
Settings
Win uses cookies, which are essential for the site to function. We don't want your data, nor do we share it with anyone. I accept.
DEFAULT COMMUNITIES • All General AskWin Funny Technology Animals Sports Gaming DIY Health Positive Privacy
1892 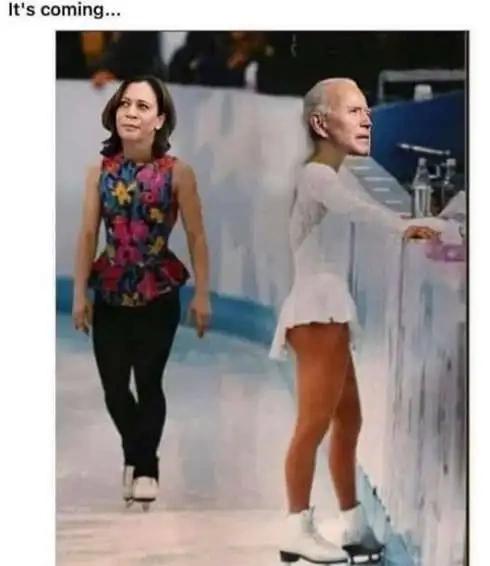 But even the left hates Harris. How is this going to work exactly?

They hate the right more.

Under democracy one party always devotes its chief energies to trying to prove that the other party is unfit to rule—and both commonly succeed, and are right.

They don't care about her personally. They just want a female, black and indian and from everywhere else, to be in charge, in order to insulate her from any and all criticism.

If you question anything she does or say, you instantly with at the sexist/racist/mysoginist bingo. She'd be nothing but a pawn just like Biden but one much less likely to be attacked.

Sounds like Barry Soetoro version 2.0. I see "F biden", "let's go brandon", and "FJB" stuff all over the place these days. I'm like, where were all of these people when obummer was in office for 8 years?

Nothing like having the decedent of slave owners as President of the United States!

They get rid of cumhole harris & pelosi becomes President!

She won't have to do that. They both take instruction from a shadow government. If (when) that entity decides that he's too much of an invalid to continue the charade, they'll inform both her and him that he's going to step down for health reasons.

They won't have him killed off by a "right wing nut" either, though I'm sure they've considered it for the gun control angle.

They're already walking on thin ice with the election steal and the public is watching closely. Its in their best interest to avoid any unnecessary high-risk conspiratorial shenanigans that could be exposed and put the nail in the uniparty's coffin.

And Biden hits the ground again...

My guess: Just before the next election. Harris taking over (a WoMaN oF CoLoR!!!), and all the NPCs who were starting to notice the shut show they voted for will reboot, forgetting all about it.

Except Tonya was the better skater, lmao.

She wasn't graceful but she could jump and throw a mean hubcap too.

Vladimir chuckles at all of us

Looking back, the whole Nancy Kerrigan / Tonya Harding thing seems so fake and staged now. Probably because back then I didn't know how corrupt and lying the media is.

Except Kamala is too incompetent to pull it off. The irony.

In reality, Kamala is Kerrigan and the Democrat party is Harding. The democrats a trying to figure out how to get her out of the picture due to such low popularity.

I don't think Harris wants any of that. At times it looks like she's scrambling to find a way out of VP.

I don't think she's bright enough to choose the moment

What is this photo from?

This is too true, it points out Biden's lack of testicles too well, thus another rank in demi-sexual diversity that feels slightly marginalized.

That bitch was a few towns over today, I had no idea there was midweek cackling contest. No wonder it smelled like shit around here.

Harris is to stupid to pull this off.

Just the leg though?

Let it come, she's even less popular than Sleepy Joe.

She'd cackle the Dem party in to oblivion.

Leave it to Pedo Joe to accidentally do himself in. A fall in the shower or down the stairs or something. Good riddance.

You gotta be old as fuck to understand this image 😉

yeah, sadly I feel joe will not last long after the president thing lasts, I thinks they don't want him talking about anything

China will move on Taiwan before he's gone though, they are out the money already

You idiots have been saying this since day one of the biden regime. Our side is full of pathetic sheep, just like the left.