TheDonald
Communities Topics Log In Sign Up
Sign In
Hot
All Posts
Settings
Win uses cookies, which are essential for the site to function. We don't want your data, nor do we share it with anyone. I accept.
DEFAULT COMMUNITIES • All General AskWin Funny Technology Animals Sports Gaming DIY Health Positive Privacy
3586 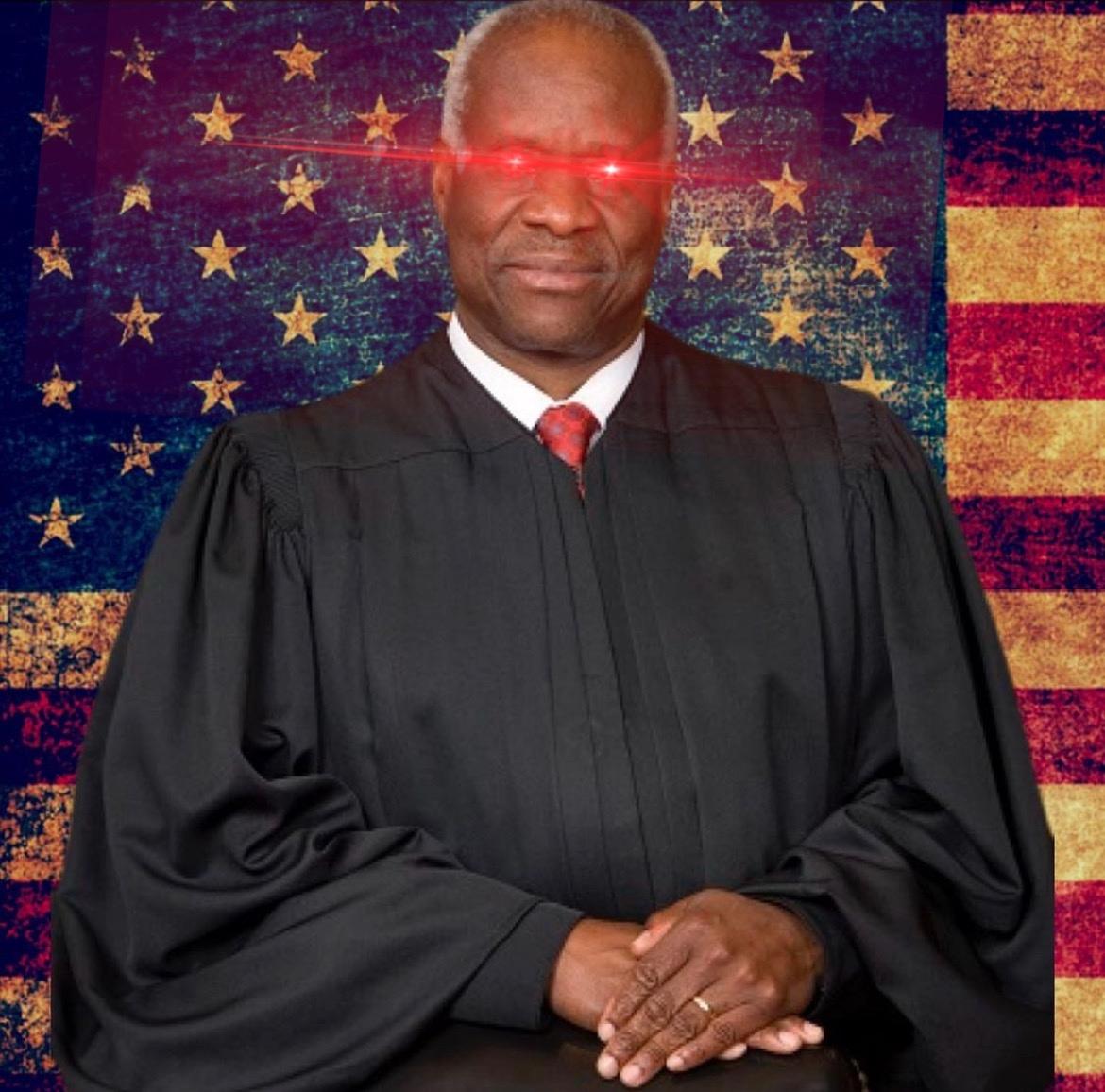 I love Based Black Man 🇺🇸

I love him because he shuts white Leftists up.

Why are you bringing his race into it. That's identity politics like the left does. OMG he's black omg omg

I think it's just a way of dunking on the left. Because people know it kinda bugs them when we give voices to black conservatives

He doesn't let the hateful people on the left intimidate him. He is a hero.

The Republic will survive.

If every black man was like Clarence Thomas, African would be the most well-adjusted, noble culture on the planet.

They attack Thomas because he is everything they hate, especially his race.

Blacks are only Black when they are firmly in the Dem Plantation getting looked after by their white masters.

Along with the scraping of the pudding.

Achieved more for us than the NRA, or catholic church.

NRA just raises money from Boomers so the people heading the organization can buy like 5 or 6 homes and have private jets.

What religion do you think the majority of the 6 justices practice, dumbfuck?

That doesn't mean they have any influence over the church shit head. I didn't say Catholic people. I said the church. Why are you being so hostile?

Because it's the one true church that educated and instilled in those justices the fortitude to overturn RvW. It is you who is denigrating a CHURCH faggot. Where are the other Christians hmm? Where?

Catholics did this. The Catholic Church did this. And I'm sure it's driving you fucking crazy because you're an envious little bitch.

The Catholic Church should have listened to the reformers. Church tradition does not hold the same authority as God’s own word.

Those child molesting faggots didn't do SHIT. Fuck you. Go suck your Pope's cock while he gives some African migrants a foot massage. The other Christians like the Orthodox or Armenian church never fell for any of this progressive shit. The Catholic church is lost. Face it you pedo loving faggot.

I want to hear more of Pissed_American!!

Haha that idiot really got me fired up. Again I don't mean that Catholic believers are pedos. But the pope and the Vatican are a sick cult of Jesuit demons who do feed off of children. The church is corrupt beyond belief. I don't understand why they took that so personally. They might be involved in it that's probably why.

"One true Church" Lmao. And where are the other Christians? I don't know, great question. Only fucking Catholics and Jews are allowed on the Supreme Court..that should tell you something.

I agree on many points, but Roman Catholics have always been strongly pro life and have been fighting this fight since RvW. Good for them, we got a big Win today! Thanks Catholics! - a wasp.

Hitler was against Catholics and Jews.

I had one parent Catholic, and one Baptist. The Catholic saw it as implied destiny, the other saw it as something they had to strive for daily, not withstanding their John 3:16 revelations about how you get to simply say “I’m sorry”, and all be forgiven and you will then walk amongst the golden streets.

I spent many months not talking to either- based on really stupid shit they could come up with, like telling me that my best friend who died wasn’t going to heaven, bc he wasn’t “saved”, but as for me, as long as I said I was sorry and meant it (for that moment) I was definitely going to heaven. 🙄. (The ultimate cope)

In one way- the Catholic parent won out- bc whatever the pope said mattered and gave you basis for life. That was super cool when it was a righteous pope.

In another way, the other parent won, because no one could possibly dissuade them from what they knew to be true, dogma be damned. Like they actually studied that shit daily- and saw the light- even though they made everyone else around then miserable about it.

It takes a stupid amount of so-called faith, or destiny, to build your life on what someone else tells you, even when you’ve never researched it for yourself.

Modern people don’t have that glorious freedom of just being instructed what to believe, and it’s gonna take cold hard facts to back up the shit that’s being sold.

Get to the bottom of all religion, or back the fuck up.

Seriously. Let the flood gates down.

If you can’t do that- you’re simply manipulating the people who come after you, and I don’t even blame you- because you probably don’t understand why- because the hardest question you’ve ever had to question is “I’m scared of dying, what do I do?”

There’s people currently afraid of living. These are the people that religion should be focused on. It’s the ultimate trap that religion only serves to profit off of.

‘Sorry about your feelings’ - Bill Clinton is a Rapist

But seriously. Victims of sexual assault within organized religion need to understand that they were abused by people in Power that do not represent God, or the religious texts & morals that they profess to believe.

These is no shortage of confusion and hypocrisy everywhere. All I know is that Jesus Lived and Died and Rose again three days later. He changed the world like nobody else has. Happy 2022 by the way :) the best thing anyone can do to come to understanding is read the Gospels. That is the history and information that God wanted us to have.

That's not proven, man. There is a constitutional issue here too. That "right" was made out of thin air and stiffled the debate that was going on in state legislatures at the time in 1973. Roe is an atrocity that stopped states from legislating, as they ironically were voting to authorize some limited abortion at the time. That debate is returned to the states and the people will probably go for a heartbeat bill in red states, not a total ban. That's not the catholic position.

As much as it may be an unpopular opinion here: he did not do it alone, and he could not have done it without Trump's three SCOTUS picks. They found their balls this time and they did not let us down. This one REALLY MATTERED, and we have to give credit where it's due.

Clarence Thomas is getting praised because he has been in the forefront with the right call on just about everything, while many of the others waffled on several issues.

I have a feeling Thomas took over the chambers after seeing the way Robert’s has handled himself.

When he saw Scalia get killed, he drove it into overdrive.

Damn right he is. One of the greatest Americans to ever serve this country

A kite raises against the wind, not with it. The way that Biden and the dems tried to railroad this guy in the 80s was nothing short of despicable.

I'm very happy for America right now, but.. --No, wait; that's the end of the sentence.

Get the happy birthday flair!

anyone who doesnt like him is clearly a racist

We need a meme of Trump giving Clarence the medal of honor.

The Medal of Honor is for military personnel. The Medal of Freedom is the equivalent civilian award.

Thanks for clearing that up!

I hope he pulls a RBG and stays on the court until the literal day he dies.

But he better croak under a good Republican president.

Hero of the Republic

The greatest! so what about all your fucking shitbirds talking about joggers and that underlying bullshit?..you know what you fucking mean you dick heads.

Quit falling for that divisive bullshit that pushes you to generalize an entire American population. Yes we all know black peopo commit a shit ton of crimes. So you going to talk shit about C.Thomas? Does every black American deserve to be placed in your category?

The GOAT and I remember all that Anita Hill bullshit.

Can we start a petition to get him sainted?

He's very Catholic I think as well. Sadly I think he has to die first, but when he does that commie Pope should also be dead and we can get the ball rolling.

Alito deserves just as much if not more credit, but he doesn’t get it because he’s white.

Exactly. Even people here are racist and celebrating foreigners in our white country

I love that guy! I just heard he has people surrounding his home now. The most unethical people in the world are liberal leftists. Shame on them. If they are so damn unhappy why don't they just leave!!! They won't leave because they are criminals trying to break in and steal.

Thank you God for blessing our nation with this man ❤

Even the racists can't deny, Clarence Thomas is amazing.

I second this. This is a great idea.

He IS the GOAT and it's not even close. Thomas is the most conservative justice ever. The man has never let us down.

Patriot of the decade goes to Trump.

May he always have fair winds and following seas.

Clarence is a national treasure.

Truly spectacular two days. Must be the peak of some planetary alignment… oh wait…

I love that they can't identity politic this one away

Anyone who saves babies from murderous whores is someone I'd be happy to call kang.

> The Tolerant Left shrieking "racist" at him normally loves it when a black guy marries a white woman.

The leftists are mad at him for bringing up griswald, Lawrence, and obergefell.

Leftist rage has gotten to the point where they say if he writes an opinion on those cases and not Loving, that proves he's biased.

They are so angry their mask is coming off and their racism is showing.

Is this the only patriot left in the rogue federal machine?

the Leftards are using racist language to criticize CT, at least we already knew that they are the racists in America.

This man needs to be President forever, I love him more than Trump