TheDonald
Communities Topics Log In Sign Up
Sign In
Hot
All Posts
Settings
Win uses cookies, which are essential for the site to function. We don't want your data, nor do we share it with anyone. I accept.
DEFAULT COMMUNITIES • All General AskWin Funny Technology Animals Sports Gaming DIY Health Positive Privacy
167 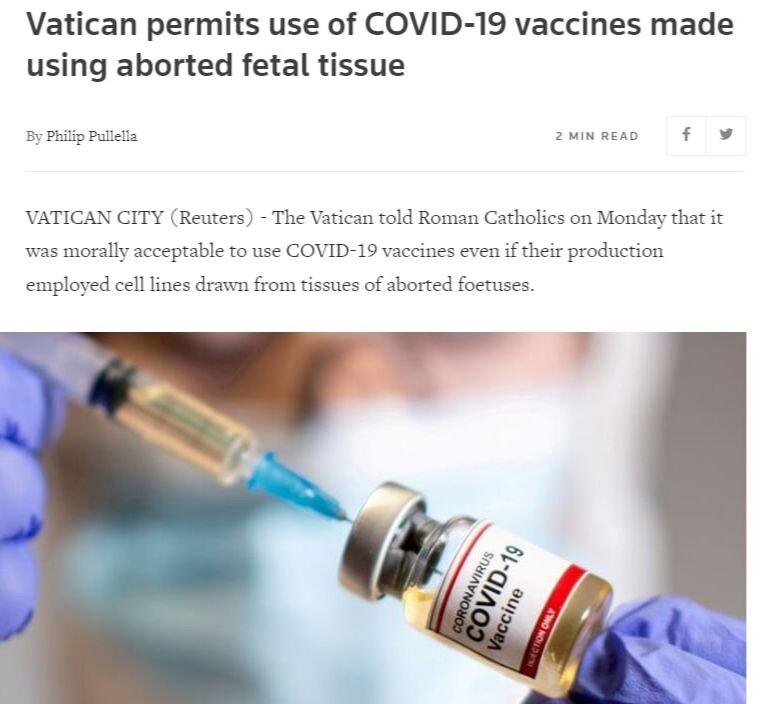 How much did it cost to buy off the pope and the Vatican. I thought they were already rich.

They have basically just thrown all Roman catholics seeking a religious exception under the bus.

It's true what they say:"absolute power corrupts absolutely"

They have basically just thrown all Roman catholics seeking a religious exception under the bus.

They did not. They tried

I don't see a vatican mention anywhere in that.

Interesting that the Catholic church left that in. Doesn't seem to leave much room for the pope.

Because the original apostles and disciples were true believers and not globohomos?

It's a big book. There are lots of scriptures. They were bound to miss a few that contradict their manmade catechism.

South American Pope is going to side with commies every time,

That's why they did it, I'm sure

I actually looked into this and it's not the end for religious exemption seekers. The vaccine encouragement is not doctrine, so Catholics can still claim exemption using doctrinal teaching against abortions. They can claim that current Vatican authorities are breaking the rules.

We could claim that, and we prove it with clear documentation. But the religious exemption rules do explicitly state that they are not reliant on anything but sincere belief, regardless of what the church officials may state

They don't have to buy off a globalist commie, they have to install him. Luckily the religious exemptions are not dependent on actual church officials but the Bible. Speaking as a Catholic, the applications that we used (all the people i know of IRL and online) did not rely on the Catholic church because we already knew they're compromised. We relied on the Bible and documentation.

Also, the religious exemption isn't just based on fetal cell use, thou shall not murder. It's also based on not intentionally harming your body, which was designed perfectly and in His image in harmony with nature, to withstand natural illness. It's also based on the mark of the beast and avoiding it, with ample documentation of how commerce was being regulated via vaccine passports and numerous government officials internationally openly speaking of that as a permanent state. Lastly it's also based on not changing your body, which was designed in His image and is a temple to be cared for, via mRNA which via reverse-transcriptase becomes a permanent change to the DNA.

None of this relies on a prelate's words. Nor should it, since regardless of one's affiliation, the core belief of creation in His image is pretty fundamental, and the mark of the beast is understood even by people who've never read Revelations.

Eh, when you rape kids for centuries, murdering them for parts is no biggie, they figure...

The countless crimes against children already led me to believe the top ranking positions got pozzed.

Long time ago, sadly. Just like all the major institutions.

Was in Ireland and sad to see empty churches with just few old ppl, apparently they had some major pedo events. fathers should have baptized the guilty with fire

I wonder if the pope has to use gloves when handling holy water?

I'm sure IT does.

The Pope needs the Rope

Numbers 5:17-19 is the only mention of holy water in the Bible. The Catholic teachings on the subject are most likely manmade traditions.

Change the word covid-19 to pedophile, and you'll see they stand for anything that remotely is against the christian biological behavior.

Old News. The article is from December 2020.

Both the Pfizer Inc and Moderna Inc vaccines have some connection to cell lines that originated with tissue from abortions in the last century, according to the U.S. Conference of Catholic Bishops (USCCB), which issued a separate note to American Catholics last week.

The Vatican note said the granting of moral legitimacy was related to the principle “differing degrees of responsibility of cooperation in evil.”

This meant that because the pandemic is such a grave danger, such vaccines “can be used in good conscience with the certain knowledge that (it) does not constitute formal cooperation with the abortion from which the cells used in production of the vaccines derive,” the note said.

In the absence of safe vaccines made from other sources, “it is morally acceptable to receive Covid-19 vaccines that have used cell lines from aborted fetuses in their research and production process.”

The American bishops said the vaccines employed cell lines drawn from tissue obtained from two abortions that took place in the 1960s and 1970s and that often have been replicated since.

The Vatican note said use of such vaccines “does not in itself constitute a legitimation, even indirect, of the practice of abortion”.

The Vatican also requires everyone working in or visiting Vatican city to have received the shots. That was an order from the fish hat wearing pope.