TheDonald
Communities Topics Log In Sign Up
Sign In
Hot
All Posts
Settings
Win uses cookies, which are essential for the site to function. We don't want your data, nor do we share it with anyone. I accept.
DEFAULT COMMUNITIES • All General AskWin Funny Technology Animals Sports Gaming DIY Health Positive Privacy
369 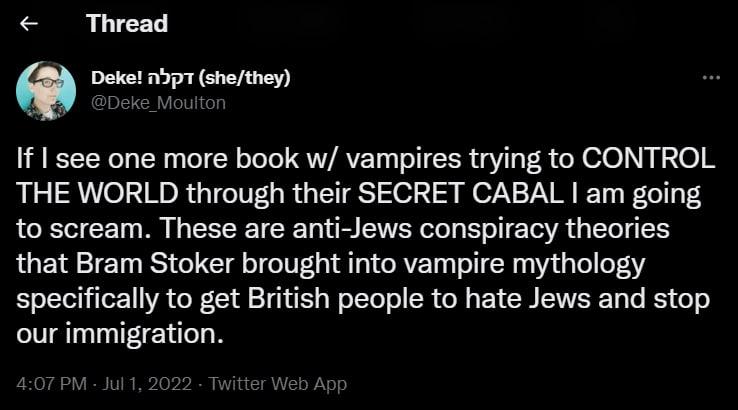 This explains the two puncture marks that look they they were made by teeth, on my checkbook.

Where did Stoker make Dracula a Jew? I've read the novel and don't recall anything like that.

Apparently he touched on stuff that only a jew would notice.

What's next, Frankenstein's monster will be an allegory of the Jewish's Golem coming back to destroy them?

Well I mean, there's always Gargamel and his cat Azrael...

That actually is a much better analogy -- the golem, both Frankenstein's creature, and the one in Jewish myth, is an analogy of man creating something he can't control. (Though the one in the Jewish myth is much more easily disposed of, if I recall correctly)

The novel is based on the real life story of Vlad the Impaler.

The “Star of David” isn’t mentioned once in the Torah. There is only one star symbol in the Torah and it ain’t the God of the Jews.

Dracula was wealthy and had a big nose. He also had a tendency of sneaking around in the shadows committing devious acts on unsuspecting innocents.

First they came for the banker goblins...

Eh, V:TM is woke trash as of the current edition. I'd give it a hard pass.

It was pretty woke in the 1990s too. I mean... the authors were always pretentious. I doubt it improved since then.

One funny quip, the spin off game "Werewolf: The Apocalypse" was so ... well, let's just say the way the Tribal system was made up, people joked it should have been named: "Ethnicity: The Stereotype."

I never bought a copy of that, believe it or not...

The various authors really enjoyed doing it imo. Similar to Lovecraft and his Dreamland stuff, you can tell they really wanted to so that rather than modern.

I really hate the responses my fellow Jews have to this shit. Just chill the fuck out and stop acting like that is true. If you don’t want people to stereotype you like that, don’t act like the fucking stereotype. Idiot.

I mean they literally suck the blood from circumcised babies penises so was he wrong...?

Any one who drinks blood and sucks baby penis is evil. I'm saying it.

Lol what the fuck, I never in my life equated that with anything like that.

Tabletop gaming has a yuge amount of vocal libtard faggots now. Makes me entirely sick how much the hobby has been taken over by the enemy.

And yes, I am checking to see if they're Wokists.

One gave himself away so quickly it was hysterical.

......... I'm pretty sure Bram Stoker just read a book about Vlad the Impaler, thought up a cool story, and wrote a book to make money 😂 the dude was working in a theater at the time.

This reminds me of that one moron calling violent looting Orcs in games a depiction of blacks..now why would you make such an assumption i wonder?

Ya know, world of warcraft's depiction of orcs (and especially trolls) made the green skins=blacks connection for me, and now I kinda see it other places, like watching lord of the rings.

I thought WoW orcs were kinda like Klingons, you know? Fierce, warrior-race people?

Makes sense should we hang garlic around the statue of liberty to keep them away!

The entire month we're in is just proof of worldwide anti-semitism.

She needs to get they pronouns straight.

But do they hate white people?

They hate non-vampires, treat them like cattle. Often have a derogatory word for them, too. Imagine that, having a word for all people not like your own and having it be the same word for cattle. Crazy.

Maybe stop doing shit that matches the behavior of evil antagonists in stories and then I won't have to hear you bitch about it.

It's almost inevitable that any fictional character portraying the heart of darkness bent on world domination will be be seen as a comparison to jews. I wonder why?

For no reason at all I'm attaching an image from the first vampire movie, Nosferatu.

Honestly the Shadow Cabal is a trope. Many shows do it. Can't hate people who do a popular trope to get popular.

If villains in fiction can be German, Russian, British, Christian etc they can be Jewish

What about the other 108 countries?

However imo Jewish people were too cliqueish this and a top down vertical social preference, (they would network power, not the people/land. Adviser to a Duke but not a man of the folk) this will create the very hypernepotismic social logistics that Jews have become stereotypically liinked. It is a reinforcing system and one both rabid antisemites and insular, Jews themselves feed into.

Deke is just mad he's jewish but not part of the Big Club.

Sheesh. I'm Jewish. I remember Vampire the Masquerade back in the 1990s. I liked it then. I think it's pretentious crap now. (The 1990s stuff that is. I don't know what it's like today, but I doubt it got any better)

It was always funny to see these young people roleplaying as century old vampires, trying to sound like Shakespeare, but lacking the vocabulary so they... talk... very... slowly....

Heh. Couldn't you just see Karl Marx as a vampire who constructed an ideology to get a bunch of stupid servants he could use to enforce his will -- and he doesn't even need to do the magical stuff like feed them blood or whatever, but it just works on automatic?

That would be freakin' brilliant.

There's a book I started reading recently called "To Heal the World? How the Jewish left Corrupts Judaism and endangers Israel."

The idea, in a nutshell, is that Reform (and much of Conservative) Judaism has been corrupted by -- what else-- a bunch of Marxist infiltrators who wanted to bend Judaism towards their vision of the world.

It goes a bit into the theological method they do this with -- "Tikkun Olam" (Repair the World) which it turns out is not much of a Jewish idea after all.

The idea that they're pushing Abortion as some important Jewish ritual is beyond disgusting. Abortion is not a Mitzvah. Maybe.... AT MOST you could say that Judaism would permit an abortion to save the life of the mother. But that's about as far as it would go. It absolutely would not allow an abortion because you don't feel like paying for a baby.

But these people attached Judaism to Leftism so tightly they're stunned to realize that they aren't even close to the same thing... if they just sat their ass down and read some original source material.

Being Jewish myself.... it pisses me off.