TheDonald
Communities Topics Log In Sign Up
Sign In
Hot
All Posts
Settings
Win uses cookies, which are essential for the site to function. We don't want your data, nor do we share it with anyone. I accept.
DEFAULT COMMUNITIES • All General AskWin Funny Technology Animals Sports Gaming DIY Health Positive Privacy
1999 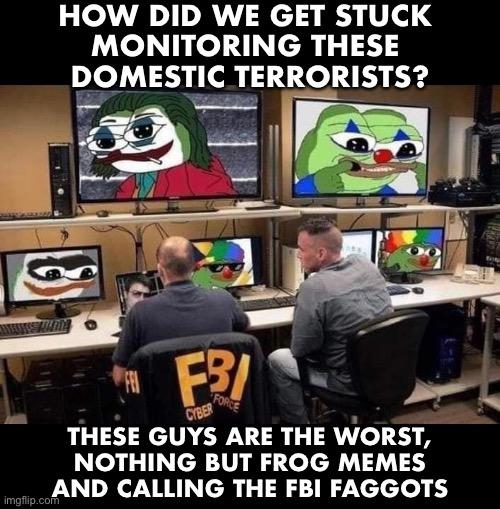 Its the only thing that keeps me going

I'm literally getting Anxiety reading all that.

I have a legitimate question for the FBI assets watching this site: Why on earth >do you think that the globalists will spare you, you who know too much, when >they achieve their goals?

The bible describes the 'Synagogue of Satan' people who claim to be jewish, >and are not. Effectively, rich athiests who call themselves jews, but have no >covenant with God.

Klaus Schwab - claims to be Jewish, is the leader of the WEF, is the one >pushing for a one world government. WEF is the group responsible for the >Young Leaders foundation, a foundation that put most of the world's currently >'elected' leadership into positions of power. George Soros - claims to be Jewish, is spending his billions putting left-wing >anti-christian district attorneys, city councilors, local, state and federal judges >into power.

Larry Fink - claims to be Jewish, CEO of Blackrock, who uses the immense >fortune and investments of Blackrock to push leftwing authoritarianism through >his use of the ESG score. Every company must adopt his woke, left-wing >narrative, or face having credit worthiness reduced, made out to be a risk to >material investments.

Jeffery Epstien - claimed to be Jewish, an Entrapper. A man whom the elites >used to implicate and place people of power into hot water regarding sex >trafficking, and pedophillia. This is why the Hollywood elites all had the same >opinion, the same shtick. They've been to the island, been caught on film with >someone who was supposed to be 18, or worse, younger. Trafficker of children, >and one who brought them blood sacraments. Maxwell Ghislane - claims to be Jewish, trafficker of children to the pedophile >island. Condemned to jail without ever revealing whom she trafficked to! Wake >up and save your souls, @FBI agent, you can be saved; you are not too far >gone!

@FBI: You know who these people are. Revelations 2:9, 3:9. The Synagogue >of Satan, the earthly powers behind the anti-christ's rise to power.

@FBI: Listen. You're the stasi behind their power. You persecute people who >go against them, their narratives, people who obtain proof of their wrong >doings, inner workings. You have to realize what you are doing.

You are either actively evil, and hoping to support Satan, or you are passively >supporting evil either knowingly or unwittingly, ignoring the patterns laid out >before you. You have to choose. You can be spared. God will not lose to him. >Jesus will crush him on the day of the Lord. You will be astonished at the power >that Jesus will wield.

You know God is real. You know who they are. You know biblical scripture has >been fulfilled, you know how to match patterns. You cannot say before the >throne of God that you didn't know.

You best start believing in Biblical prophecy: You're in one. Come to Christ, tell >it to Jesus. It is not too late until the curtains are pulled back. The bible is right, >Jesus is the messiah, the anti-Christ is assembling all the pieces of his plan, >and you are pawns. I implore you; come to Christ. He can make your paths >straight, he can make your ways upright. Do not ignore that which your fathers >knew, and turn away into superstition. God is real . You know Jesus lived, he >was documented by many nations, who confirmed that the people stated his >supernatural power. You know about the prophecies in the Bible that have >come true. You can see the writing on the wall.

If you have any final doubts, look what happened to the left wing idol, the >painting of George Floyd. A thunderbolt, that destroyed it and left it in ruin, >directly to the forehead. Try and calculate the odds, and be astonished. God >will not be patient with us forever, there are new mercies everyday, but we >MUST grab a hold and pay attention. The fear of God is the beginning of >wisdom.

You forgot to remind them that they defend, protect & serve those who deserve a millstone around their neck(s) before swimming in the deepest of seas. Nicely stated, otherwise. +1

Well, the Faggot Boi Insurrectionists are a bunch of homos.

to be fair..his hair stylist could have dropped dead from the Rona shot while buzzing his hair....... nahhh...that faggot actually asked for that cut...hahahaha

It's literally the photo negative of his partner's!

Nothing but frog memes and calling the FBI faggots."

(1) Because frog memes (and that's Pepe to you, faggot!) were always cool, until your side declared war on Pepe. Pepe went from being cool in memes, to being an undefeatable Meme Warrior, overnight. We get that you don't get it, FBI faggot, and that's why we laugh at you.

(2) We call you FBI faggots because, well, that's what you are: rump-riding FBI faggots. We can include the "intelligence" and other "security" agencies in with that, too. We were taught to tell the truth as kids (unlike you faggots), so you're mad about that, bro?

Or maybe just jelly that the Patriots here are chads, and you FBI-types are....well...faggots?

Not true. We also call Bill Mitchell a faggot!

Shill Bitchell is a midget faggot that loves a truck stop bukakke.

How's my favorite useful idiots who think that they are important to the elites that command them?

I'd like to be a fly in the room of some FBI glowies. Except of course for the sodomy that occurs during their night shifts.

I wonder if they realize how much the country really hates them ?

They know, but they hate the country back.

You want them to sit in a jail cell and wait for someone to kill them?

Your want them to not kill themselves?

Lol I watched the movie Arlington Road a while ago where the feds were supposed to be protagonists... Found myself cheering for the supposed "bad guy"

Their haircuts are inversions of each other.

Thanks for the laugh!!! Imagine being an FBI agent monitoring All this and secretly rooting us on... I'd hope that would be possible.

FBI could be good but management is shit

And I bet many agents know that

If that were true, then there would be whistleblowers. Not one. This abuse on power started under J Edgar Hoover. No one came forward as a whistleblower and no one has been punished yet.

Is that you Sean Hannity? Mr. 99% of the FBI are good, loyal Americans!

If that were true, then there would be whistleblowers. Not one. This abuse on power started under J Edgar Hoover. No one came forward as a whistleblower and no one has been punished yet.

PROTIP: It would be better for you all to eat dick until you literally die, than to endure what is coming for you faggots.

The gobble soros dik for breakfast.

Get a real job you pussies.

pussing around for the corrupt FBI is not honest work.

You should be mowing lawns and shoveling trash at the landfill.