TheDonald
Communities Topics Log In Sign Up
Sign In
Hot
All Posts
Settings
Win uses cookies, which are essential for the site to function. We don't want your data, nor do we share it with anyone. I accept.
DEFAULT COMMUNITIES • All General AskWin Funny Technology Animals Sports Gaming DIY Health Positive Privacy
1786 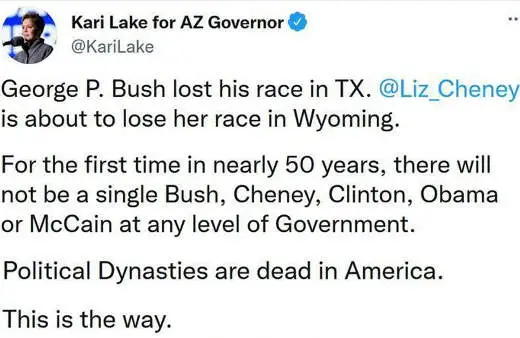 Yep. No matter who you vote into power, the government still wins.

👀 Me over here looking at Don Jr and Barron …

No. You can do a lot in turning the direction of the party by inserting outsiders and people who are there for the right reasons, cutting off lobbyists.

I'd argue there still is an Obama at a level of government...

But on a different note, why is Obama even on her list? How many Obamas held office? How many ran for office?

Shouldn't be there. Bush/Cheney/McCain is all you need for a 50 year streak.

The Clintons should replace Obama here

Pretty sure he's a bottom dude.

For 50 years those mentioned in the tweet have been installing a deep state.

Literally all pawns protecting the tribe that bribes them

Seems like we had a war against royalty once…

My man, why are you waiting two years to not fuck Bidens? Ewwww.

Damn I see what u did. Too early for this, pede

The Bidens aren't a dynasty. Joe is just one corrupt politician with a bunch of corrupt family members

I wish this were accurate (the political dynasties part). What do you think Pelosi/Feinstein/Kamala/Gavin Newsom is in California? They may have different last names but it is an unstoppable dynasty to be anointed by the democrat power structure in California, and many states and cities

Well, until we vote in Don jr.

When people told me they thought Liz Cheney should run for POTUS I told them no, even if she was a perfect candidate I will never vote for a relative of a former or current politician. Even Gavin Newsome is too close or me.

We need to destroy political dynasties and make sure they never happen again. American politics is NOT "a family business" unless you want to guarantee corruption. I'm not sure how Obama is part of a dynasty though.

We did it, we got rid of the nobles running everything for us. Damn, why are all these rich people still running things...

Trump definitely slayed all of these political dynasties. Obama's aren't out yet though

What the fuck do you imagine I meant by that. Take a wild fucking guess. It’s 50/50.

I know it's 50/50 spaz. The Obama's are still running some shit and their reputation is okay.. Bush, Cheney, McCain, and Clinton reputations are in the garbage

Are you always this obnoxious? Get off the internet and go hang with some friends. Which Bush, McCain, Cheney or Clinton has a good reputation?

When was Obama a political dynasty?

They are trying to make it one, I'd say the Obama admin is running Biden

Id say most of the Biden regime and I'm honestly worried about Michael getting into politics. Needs to be snuffed out asap

Obama was not a dynasty hehe. Little mistake here or maybe she meant his influence in the senate but still… the Chicago corrupt dynasty.

Just fyi, Senator John Kennedy is of no relation to the Kennedy family. I know; crazy.

And Joe III, the drooling ginger one who was a Kennedy, had to pick to run for reelection in his House seat or try to unseat an incumbent Democrat Senator and he made the stupid choice. He's now laundering money in the private sector probably.

... Is there another Kennedy that I'm not able thinking of here? Are we out of Kennedies?!

I was thinking the drooler was still in office.

Which Kennedy is in office (Sen/Rep) now?

What I'm looking forward to is the new Trump family dynasty

Thanks Pede. Didn't dig into it before. Aunt in law

I wonder if anyone in the Biden family actually thinks Hunter has a chance to enter the political realm as an actual politician and not just some middleman for payoffs.

When Jr. takes over!

Don’t be surprised if they run Michelle (Mike). There’s a reason they’ve been pushing this trans shit so hard the last few years.

need to widen the definition of 'dynasty'. its not just blood-line ties.

You forgot Newsom. He's not going anywhere anytime soon. Four families run California, and he's in one of them.

Newsom will be done in 2024 after he tries and fails to get into the WH.

its a good start, need to get rid of the Romney's, Ronna and Mitt need to go. still wont hurt the DNC GOP globo-Homo borg but it is a good start

It is a start and a long way to go.

They’re still in media and capable of the same amount of damage.

Except this is Obama’s third term.

You mean 2024 when Occasional-Cortex is handed the throne, right?

No they are not dead fool. Just on the defense. Stop over exaggerating.

you're the one that's exaggerating.

Biden is still around