TheDonald
Communities Topics Log In Sign Up
Sign In
Hot
All Posts
Settings
Win uses cookies, which are essential for the site to function. We don't want your data, nor do we share it with anyone. I accept.
DEFAULT COMMUNITIES • All General AskWin Funny Technology Animals Sports Gaming DIY Health Positive Privacy
1801 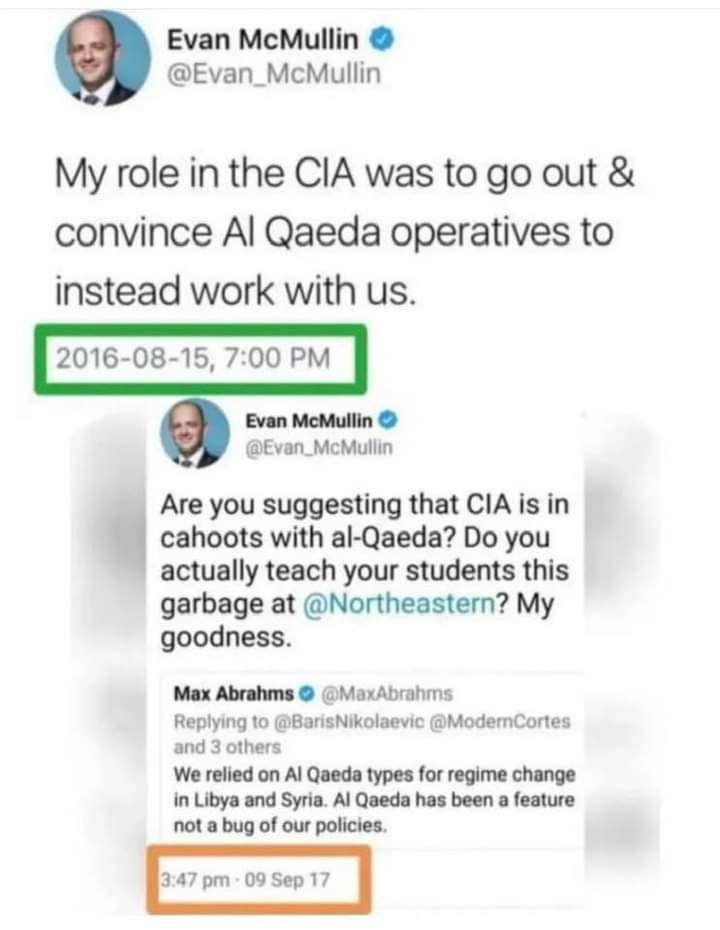 Are you seriously suggesting the Federal government had anything to do with Jan6th or 9/11?! Like, OMG!

At the same time

The dude is funny

It’s public knowledge the US government aided and abetted the Moujahideen to fight against the Soviet occupation of Afghanistan. Nothing has changed

At least the Mujahedeen didn't attack us. We were helping Al-Qaeda in Libya and Syria after they did 9/11. It's literally treason.

“We”? You mean Obama

Bush and obama have sex and are nwo now wef

Remember, the characteristic that they look for in a quality CIA agent is sociopathy or rather someone who can lie to your face and not feel a damn thing about it.

Been working with bad guys for a long time

Been bad guys for a long time

The professor is exactly correct. The rebels in Libya were Al Quada aligned as were the rebels in Syria.

Anti jihadists were saying it looked like Obama had switched sides in the war on Terror, siding with and assisting the Muslim Brotherhood / Al Quada aligned elements to achieve their goals. I came to suspect it was more subtle than that. The pattern was to help them win, then watch from the sidelines when they got crushed by other parties.

This post suggests we were also using them for our own geopolitical ends. Not remotely cool. I don't mind Qadaffi coming to a bad end, but the aftermath has been a shit show. I don't approve of the Saudi / Iran proxy war in Syria because it was a proxy war and the citizens of Syria didn't do anything to deserve it. If KSA and their allies aren't fond of Iran then take the fight to Iran directly.

The myth of the Uber smart super spy is slowly dying

But incredibly irresponsible bureaucrats with a immense budget

There are still a ton of legitimately amazing spies and CIA Officers/contractors/agents/etc. All of whom are critical to America and our interests and do great work [overseas].

That being said, there's also a bunch of fucking retards, diversity-hires and deep-state operatives in the Agency.

Sow the offices of the cia, atf & fbi in salt, then nuke them from space just to be sure.

It has always been a myth

lol, so... just going out on a limb here, but you know absolutely nothing about the CIA outside of from what you've learned from memes and retards on message boards. Would that be a fair statement?

Leadership has gotten corrupt, but the CIA is massive. As we speak, there are currently folks on CIA payroll doing cool-guy stuff, shooting bad guys in the face or convincing some Muslim mud-farmer in Sub-Saharan Africa why he should risk his family's life for America.

That being said, as we speak, there's also some shitbag with a conex box full of guns that went "missing" selling them to the cartel for a side hustle or another entire department full of shitbags ruining someone's life because their someone important's political rival.

Leadership has gotten corrupt? It's been corrupt since at least the 50s, basically since it's inception.

Not to say valuable work isn't done by some at the CIA. Sure it is. But, on the whole, it's been much more of a negative force on society than a positive one.

From drug-running (from Vietnam and Laos to Afghanistan) to overthrowing governments to false flags to MK Ultra and the like...

Why is my worshiping of the “heroism” of the cia necessary ?

Why is my worshiping of the “heroism” of the cia necessary ?

If I'm being totally honest, I don't think it probably is.

It shouldn’t … that’s the point

I'll look after work if toorroot doesn't post something first. They were allegedly trained to fight against the Soviets in the proxy war decades ago.

The right hand doesn't know what the left is doing

I mean... these aren't contradictory statements.

America definitely did support terrorist organizations for regime change wars, my point is just that he's not saying anything contradictory. I'm assuming he was an Operations Officer, so he personally didn't support any terrorists, but his higher-ups sure did.

Yeah, there's a severe lack of reading comprehension on this site sometimes.

lol, as we get bigger and bigger, I'm concerned that it's going to be unavoidable that we turn into basically right-wing reddit.

Don't get me wrong though, it'll never get THAT bad. I'm currently watching r/politics have a fucking meltdown over what is possibly the most obviously staged bullshit I've ever seen attempted to be passed as reality.

"Photo evidence proving that Donald Trump tried to flush documents down the toilet!"

"We'll know our disinformation program is complete when everything the American public believes is false." --William J. Casey, CIA Director

lol, why bother taking the word of some random lady for it? We have official, declassified documents proving exactly the kind of stuff that goes on.

I think we had a pretty good idea the CIA maybe wasn't 100% trustworthy right around the time we found out about ops like "Midnight Climax". There's significantly worse shit out there, I just always find that one particularly hilarious. Getting hookers to dose John's with acid lol

Pretend to be terrorist

Pretend to be terrorist

Bullshit. Cartel members get free guns too. Or at the very least, steeply discounted.

Evan McMuffin is a fucking idiot!

I remember when a declassified document proved that Obama funded Al-Qaeda to overthrow Assad.

To be fair (inb4 someone tries to take my my username seriously to deflect from the point), he didn't admit to working with Al-qaeda, he said they converted their agents. Pretty big difference between the two. Meme is shit, but the underlying point is correct.

We are ruled by sociopaths.

And then they leave the greater mess for everyone else, absolved of all responsibility, and then they tenderly suck eachothers cocks.

Now you know why Ambassador Steven's was trying to be kidnapped.. Hillary dried up the arms shipments and Alqueada wanted MORE.