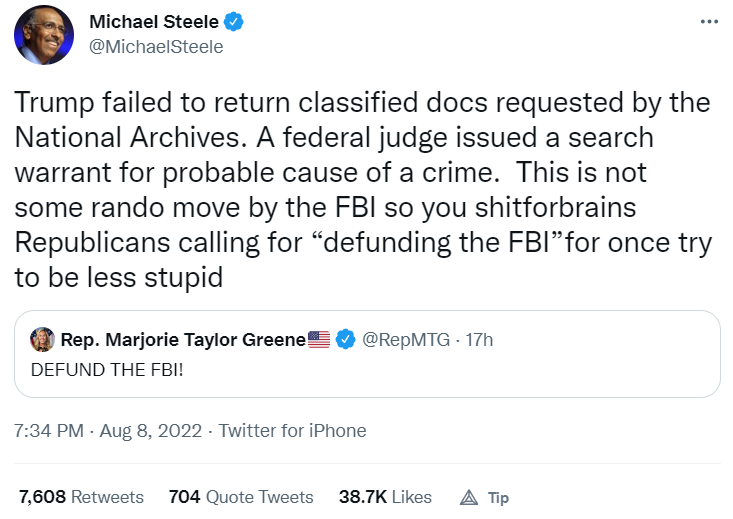 so the fbi raided trump because of overdue library books?

Yup. Meanwhile the clintons kept books, furniture, and a set of silverware that belonged to Lincoln. Nothing happened to them.

Fantastic way of putting it.

Turns out it was a fake news story last I heard. CNN even said weeks later it was incorrect reporting from hearsay.

It was a magistrate judge (term of 8 years, not lifetime) who went from

He was involved in the early sweetheart plea deal for Epstein years ago.

So we know where he's coming from.

Also, Comey hadn't returned classified docs after Trump fired him, and the FBI went all friendly like to his house and picked them up "while sitting at the kitchen table".

Not to mention Hillary.

Go jump in a lake.

The President is the ultimate de-class authority.

According to the law, they are declassed before the NA gets them…

Michael Steele embarrassed himself badly. The trick is getting him and the clowns who will laud him to actually realize it.

Literally has NEVER been a Republican!

They brought him in, dressed him up and paid him to pretend to be Republican for "optics". Totally backfired.

There are more like him, they have yet to be exposed

I think chair person probably fits in this case.

Even if we win in a massive landslide this fall, if we don’t get MAGA leaders in the house then it’ll be for naught.

How do you know a rino and democrap is lying? Their mouth is moving. Mega Maga bitches.

So this guys claim is that when the former president didn’t immediately return documents to the national archive when requested it is appropriate for the FBI to raid his house?

You guys just pushed millions of independents that don’t like Trump to vote for Trump.

Wait. This dipshit is saying that the FBI was looking for "probable cause of a crime"?

Here's me thinking they needed that probable cause to issue a warrant.

So this dipshit either severely misspoke, or he is admitting that the FBI committed to a Soviet era fishing expedition to find some kind of crime committed.

RINOs get the wood chipper alongside the rest of the traitors.

Hillary deleted 33,000 emails under subpoena from her illegal server in her residence and had staff smash phones. It wasnt a big deal to them and nothing happened.

But lets keep pushing diversity hires in the GOP to chase that black vote guys!

Because you will get 1% more Black votes. But run off 10% of voters that just stay home because GOP racial virtue signaling makes them indifferent to who wins.

How is it such faggots get put in charge of the RNC? Who appoints them?

So the former uniparty piece of shit has some to say? So do I........Fuck Off you cunt.

We all know why he was made chairman. HUGE sign how compromised the GOP is.

Is he calling a sitting congresswoman shitforbrains and stupid? That’s a mean tweet jackass NeverTrump. Screw your norms. And defund the GOP

He's probably also one of the people who clutches his pearls at Trump's mean tweet decorum. He's really a well-adapted individual for the clownworld idiocracy.

I don’t know who this Steele bitch is, but she should stick to baking cookies and doing her nails.

Michael Steele can't even be a successful Uncle Tom.

Steele didn't say "allegedly," so I want him sued for libel after this is over.

Knew he was a rino, didn’t know he was a traitor.

corporate needs you to find the differences

Any other cases involving the FBI seizing Christmas cards from foreign leaders that were taken home by Presidential staff?

These are the republicans that sold this country out. They are the reason we are in this mess.

The GOP supports Judas Pence....that should tell you everything.

I feel like the "decorum" mask is falling off.

If it isn't my former Lt Gov.

Oh, they already requested them? Cool, then you should have no problem showing us the subpoena, Mike.

Why the raid if he was cooperating with them?