TheDonald
Communities Topics Log In Sign Up
Sign In
Hot
All Posts
Settings
Win uses cookies, which are essential for the site to function. We don't want your data, nor do we share it with anyone. I accept.
DEFAULT COMMUNITIES • All General AskWin Funny Technology Animals Sports Gaming DIY Health Positive Privacy
4379 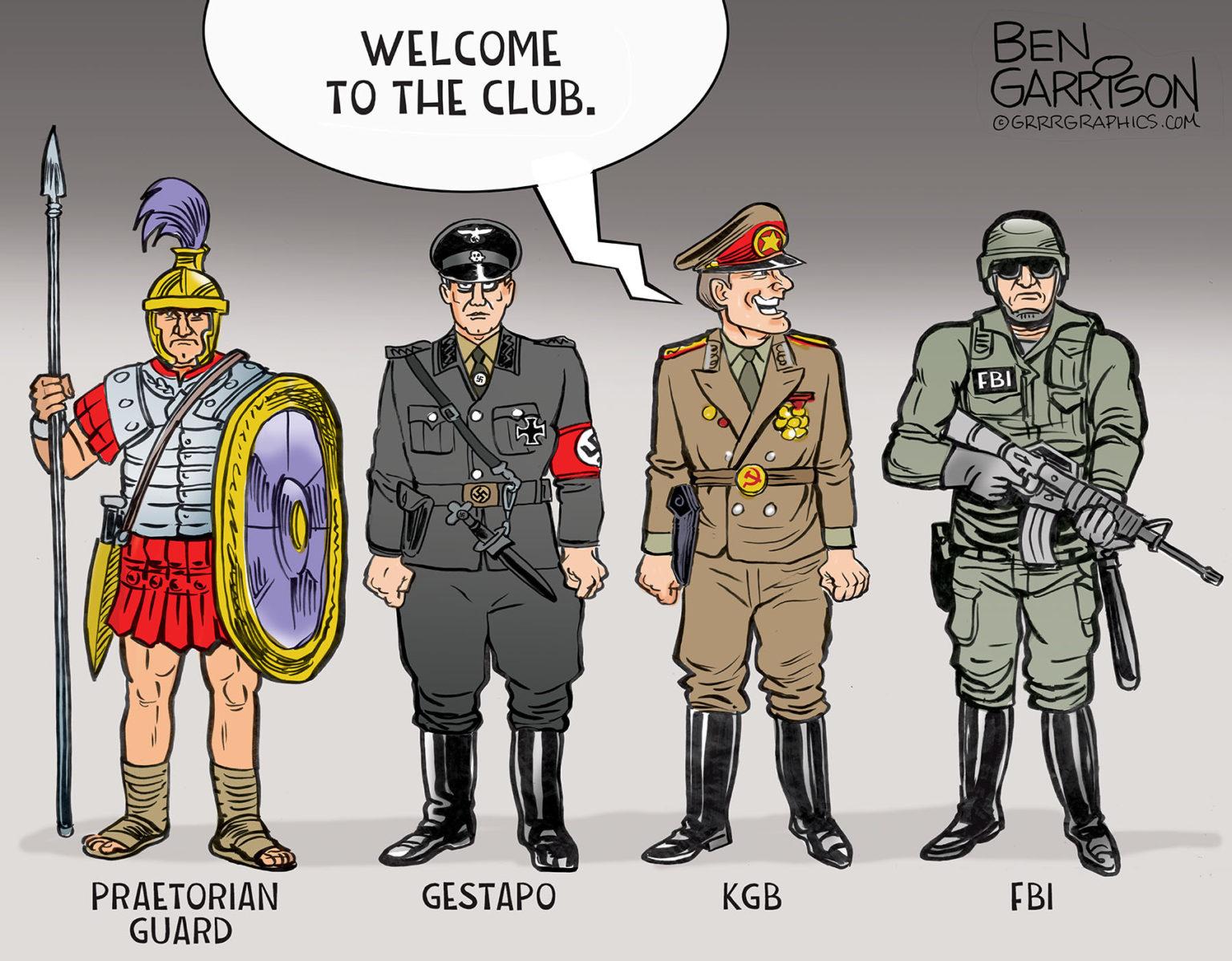 This. This is perfect

Sure, but not exactly brilliant just to be blunt.

We've known this for years

It’s not for us. It’s for the normies.

Then do something productive and repost it where they will?

Bingo. That's what ya gotta do. They are curious now and slowly waking up. Be the ALARM CLOCK.

You are right, they don't read his comics intentionally, but they are exposed to them., and most of what he shows doesn't take a lot of thinking for them to digest.

Must be his wife's bull who decided to wear his uniform for the day, while the actual agent was locked in the cuck shed.

I would have added a North Korean secret police officer...they'd look like the KGB guy but with an additional two hundred medals.

And a much bigger hat

Or are limp-wristed faggots

That was my only complaint. The FBI goons should be drawn as the fat donut eating chuds they are.

It's perfect because it conveys the message that is needed, which is that they are jack booted thugs

Not perfect only because the FBI is way gayer. Should have showed them with pride pox while kneeling at BLM riots.

The FBI is a Praetoean Guard

It needs to be a scrawny fag with a faded hair cut , khaki shorts, polo shirt, black socks and sunglasses.

meh from the waist down they're the same, they've got small dicks except for the Praetorium Guard geesh did you see the size of that thing?

They need a rainbow BLM patch.

Look at that awful trigger discipline. What a fag.

Soon, they're going to wish they never chose to side with communism/evil. "I was just following orders" isn't going to save them from their executions like they think it is.

Everyone one of us have been saying this

Not the progressive interlopers pretending to be patriots. They try and get us to be pro progressivism.

Apparently, it's people who hate communists.

You're projecting again. This is hilarious.

Or a blue-haired butch.

I can’t even draw a good turkey with my hand and he can draw this on the fly :(

Some people are just born with a gift.

I'd like to add: ...and then they develop it with practice.

I'm not gifted that way, so practice ain't gonna help, but still, even if you're born with it, it doesn't develop itself.

Holy shit, just a sketch?? Ben Garrison has God guiding his hand to come up with this so quickly!

And she dropped him on his head repeatedly.

He cucked out and deleted it, what did it say?

The FBI will forever be referred to in the same league as the KGB, Gestapo, Red Guard, and Praetorian Guard.

This will be an eternal shameful stain on our history, assuming we fight back and don't let America be destroyed by The Great Reset.

If things do get better(or if they don't), things are only going to get worse from here. Mark my words.

You forgot to say, "shameless plug"

And I'll fucking do it again!

Look, I spend time making them... Most of them I draw. However they get very little circulation, and I made them because they belong to be out there. So someone has to help them circulate.

Just say shameless plug, so people don't immediately ignore it, assuming it's self-promotional spam. As long as you acknowledge it, then it's all good.

The FBI ALWAYS WAS the American Gestapo. J. Edgar Hoover used it to harass political dissidents and amass secret files for blackmailing high level politicians from the start.

"In private writings in 1945, President Harry S. Truman wrote that the Federal Bureau of Investigation (under Director J. Edgar Hoover) had transformed into a secret police force, and compared it to the Gestapo:

We want no Gestapo or Secret Police. F.B.I. is tending in that direction. They are dabbling in sex life scandles [sic] and plain blackmail when they should be catching criminals. They also have a habit of sneering at local law enforcement officers.[40][41][42]

THIS IS NOTHING NEW

Shit man, I never knew that, but it makes a whole lot of sense. This country needs no federal law enforcement, only local.

can you explain to me what exactly your problem with the praetorian guard is?

Is this a genuine history question or are you defending the praetorian guard?

Dude they killed Aurelian, one of the greatest Men who ever lived, because they were afraid he would punish them if he found out they were fuckups.

And then suddenly, for absolutely no reason at all, hitler was voted into power.

weimar germany sure was great

If hitler never took power via overthrow, weimar germany still would have come to an end, anyway. As a conservative government was about to take power anyway.

He was never "voted" into power. He took power via a coup.

"Welcome to the club." is good.

Would have been better with USSR's brutal NKVD instead of GeStaPo though. People don't know about the NKVD as much because of our war and post-war propaganda focused on NSDAP/Hitler Germany though.

The NKVD (originally called the Cheka) was basically just rebranded as the KGB, so they’re still up there. The Stasi really shouldn’t have been left out.

StaSi would have been good.

It’s helpful for the normies.

Glad I wasn't the only one.

Especially considering that the term Nazi was made to insult Nationalists.

Naw they should make the FBI a flaming faggot cocksucker. They only picture themselves being that cool.

They've been in that club since before Ruby Ridge. They've always been traitors.

Look, jackbooted thugs! Now, where are the ones from our side?

LOL out loud. The FBI has always been part of the club.

I'm not usually a fan, but this one is a home run!

I too did some MemeSmithing today!

and it looks like the IRS is next up

When the KGB made similar arrests, they didn't have fake news cheerleaders giving them moral support. The arrests were done secretly, hence the term 'secret police'.

Same-same, but this time slightly different.

Shoulda put the Ottawa police in there.

This is the reason the Founding Fathers wanted the 2nd Amendment and warned about a Federal controlled Military. The AD US Military can't arrest US citizens under almost all circumstances. So the tyrants in DC turned the US Capitol Police and FBI into their own "Army" with arrest powers to go after their political enemies and persecute them.

the praetorian guard were exactly like the secret service of today. conflating them with the gestapo and kgb is completely absurd. its the sort of baseless nonsense that damages genuine history. fuck him honestly.

They were "exactly" like the secret service pretty much only in duty.

They served... basically... literally only one emperor honorably, Augustus.

After he died, pretty much every emperor after that, they essentially would pull them aside and tell them "If you ever talk about getting rid of us, and you don't pay us fabulous bribes, we're going to fucking kill you". And they upheld that promise on more than a dozen occasions.

It wasn't until Constantine the Great that finally there was an emperor with enough political and military clout to actually do what needed to be done, he disbanded the guard, basically had everybody who complained about it killed, and everyone else was sent to go finish their service by being sent north to be raped and eaten by Ostrogoths.

I've been saying this for months. The FBI is barely removed from ANY of these groups.

It is not fair to the Praetorian guard, you got them separated by literally 1800 years from the gestapo!

The left always manage to fuck…they’re only saved by rigging elections.

This is so fucking anti-white. It's sickening.

Way to gobble up the historical narrative: that the most evil motherfuckers of all time were white.

I guess you only think only the last 10 years of 'news' and 'history' are fake? Apparently, everything before that was all true? Yeah, sure, makes sense... Carry on....

As if FBI agents actually look like that LOL.

Big diff with the three on the left, they didn't have an armed proletariat to face down.

Art is powerful, and we don't need a liberal arts degree to tell us that.

Ben for Sec of State!