TheDonald
Communities Topics Log In Sign Up
Sign In
Hot
All Posts
Settings
Win uses cookies, which are essential for the site to function. We don't want your data, nor do we share it with anyone. I accept.
DEFAULT COMMUNITIES • All General AskWin Funny Technology Animals Sports Gaming DIY Health Positive Privacy
2548 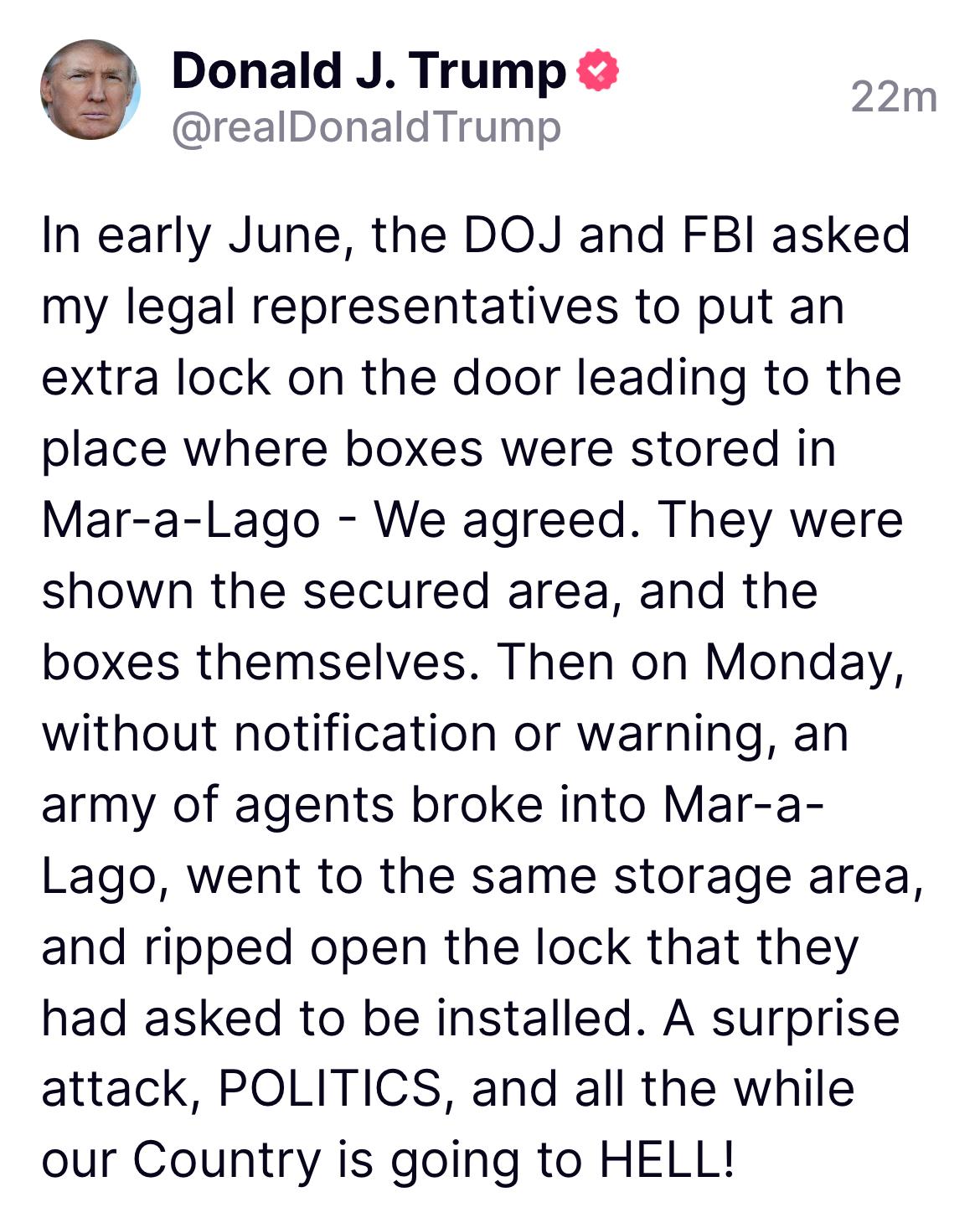 This way they knew which door it would be behind.

You're assuming they were after those boxes. It doesn't take nine hours to cut a lock and make sure those specific boxes are behind that door.

Well, there was the eight hours they spent at the omelette station.

In an story about "net zero" emission that I heard yesterday, they described how many Dutch farmers invested heavily in new farm tech years ago. They spent a fortune on equipment. Now they're being told that all of that is the wrong tech, and they need to go with something else to achieve net zero emissions. The recommended steps include - limited fertilizer, lower headcount on livestock. The farmers are stating that the motivation is for Holland to transition its farm land to housing for 1M new immigrants.

So, here's their government saying, "BUY THIS!" then a couple years later saying, "STOP using what we told you to buy. Do THIS instead!"

So, to be green, you just have to produce less. Maybe that's why Democrats and snowflakes like it. Save the world by producing less.

You comply then they change the rules. We saw it with COVID. Carbon is life therefore, you must be neutralized.

Mandating your money into their or their buddy's pockets

you just described Obamacare and the green New deal. and the vaccine mandates

I mean it was literally written on the Georgia guidestones

Well the FBI are retards so it is possible one of them shoved the key up his nose or ass and it was lost so they had to break the lock.

Like some kind of obstruction charge w/ intent to deceive or resist, etc.

it was probably more like the Mueller witch Hunt where they were just fishing hoping to find some kind of crime.. they wanted to trick him into showing where all the boxes were stored then they planned to break in and search through everything hoping that a billionaire businessman might have slipped up at some point and they could find some kind of process crimee

FBI are just Stasi. Always have been they are just more obvious about it now.

Killed MLKJ, funded, participated, and riled up the KKK, and are gay pedophiles. Losers.

Yup, they've been used to persecute political opposition since they were created. Woodrow Wilson used them to spy on and even arrest those against his policy regarding WW1

they also made up conspiracy theories about Martin Luther King and allegedly tried to assassinate him..

they also infiltrated the KKK in order to politically Target them and shut them down. which objectively nobody supports the KKK but still that was also them being corrupt and dirty in order to go after their political opposition. should have just let the KKK die out because nobody supports racism

I swear people hate Trump because he isn't a surreptitious scumbag. He is exactly who he is and that pisses people off who think they need to be underhanded demons to get anywhere.

That a big part of it. Ruining the usurpers game

Let's be clear. There are people that are famous or powerful because they did something. Something awful. Trump isn't one of those people. He got where he is because he's based.

and that's why Democrat voters hate him

It's because he's an outsider on whom they have no blackmail.

The lock is important.

They're going to say he purposely tried to impede or obstruct them w/ it.

Sounds like they were pissed that Trump found the spy devices they planted in his place on the first visit.

They had to go back to plant more devices and see if anything had gone missing.

Yes, it's total conjecture, but what else is there at this point??? We're tolerating treasonous scum, and I still don't know why, but it won't end well.

didn't Trump have the oval office completely remodeled when he first moved in? pretty sure he was having them search for and removal of the spying devices that Obama left

That sounds right. Then I think Melania had the entire place cleansed of the evil presence left there by those sickos.

Probably need to do the same at Mar-Lago.

spy devices are very easy to find. and also jam

This is common practice with people who handle sensitive documents. even low low people with clearance are asked to do this.

This is standard practice. Which makes the raid even more suspicious.

I was referring to the safe in a locked room, being normal.

The country going to hell while government stooges play political theater (aka treason).

this is totally normal for every fascist dictator after they steal an election.. to cement their power they do that. they lock up political protesters as political prisoners. they raid the offices of Free press outlets to intimidate them and they send the Gestapo to brush down the doors of their political opponents.. Biden rig the election and is a fascist dictator and that's what they do

They get the boxes they wanted?

Then the FBI filled another room with cocaine. From floor to ceiling and locked it up. After they barged into THAT door they exclaimed, Trump may have done a line!

Sounds like they planted the evidence in June and went to retrieve it Monday, to make a case. Wanted the door locked so no one had access to remove anything they planted. Trump wouldn't look through it, he had no need at that time.

Should have moved them, used room to eliminate them. Nothing would have ever been said on the news.

They're after stuff that incriminates them, not Trump. Wake up.

Im also willing to bet what the feds grabbed werent the real docs. Otherwose...if trump didnt see this coming be shouldnt be reelected....hes too slow a learner.

How the traitorous Republican party responds to this outrage should determine its survival. How could any citizen vote for them if they do nothing? At a minimum they should demand the removal of Biden, #DuhGarland and Wray.

This way they can claim Trump hid something. A Trap.

they better have found what they were looking for or else they know it's going to be years of scrutiny and they're gong to have to cover their lies with more lies.

I wish his security detail and his ss agents just laid waste to those kid fucking pieces of shit.

They, the FBI, installed the that very lock they ended up prying open because they forgot their own damn key. Guiliani provided the lovely details on an interview with Crowder. Key Stone Cop BS.

SHOWS "MALICIOUS INTENT" by the FBI and the DEEP SWAMP DOJ

I hope this pissed him off. He went in there last time with his hands out looking to work with people and everyone stabbed him in the back. If he comes back it's time to fire everyone. Every single one.he can replace them with patriots that aren't from DC and have no relation to any of those families. Tap rural America.