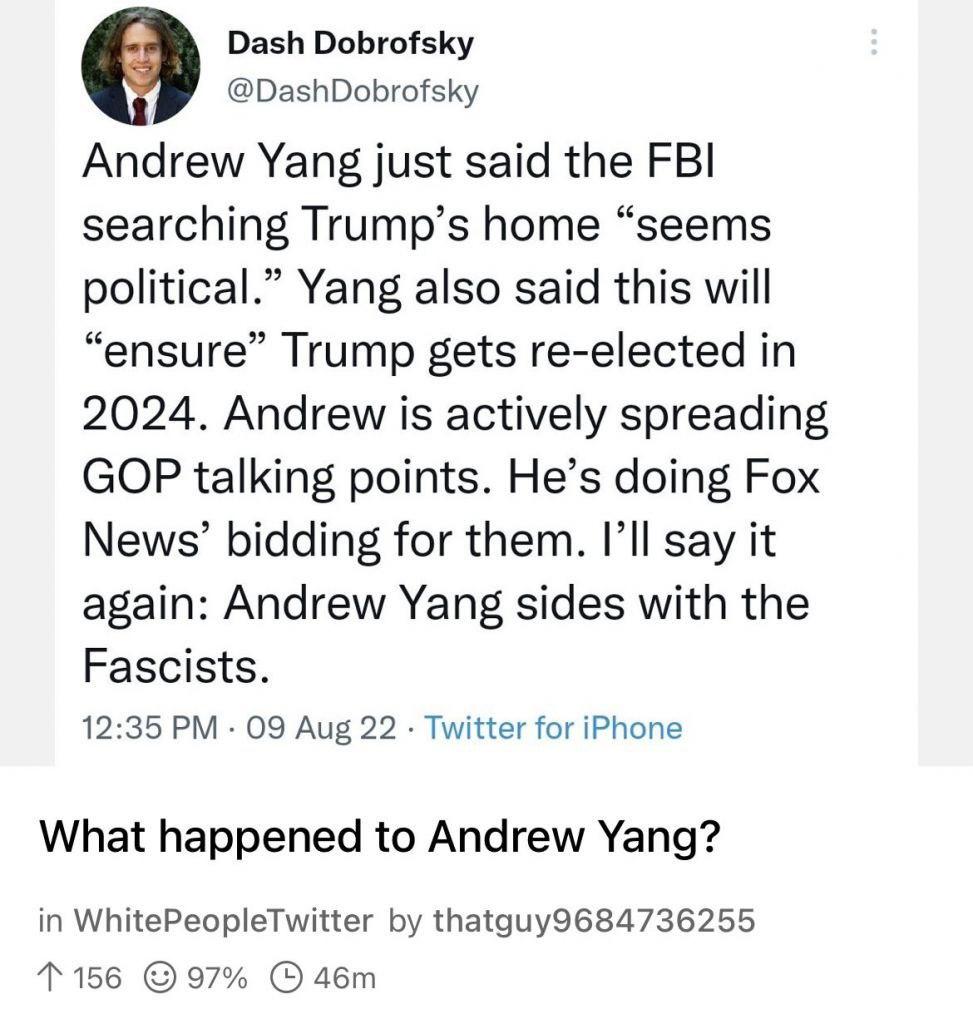 The fucking fascist and the fucking bolsheviks ... the two big BRANDS of socialism keep on dicking it out .

Next Week, Andrew Yang on CNN: I Support The Current Thing.

The “I put a tie on for my profile pic” wacko account. Classic.

New definition of Fascist: To have common sense.

Accept state violence or you're a fascist!

Help support the states seizure of private property by turning in your neighbors or you're a fascist!

This idiotic behavior stems from 20's Europe. Fascism was a response to Bolshevism, so Marxists labeled that "reactionary" and began calling ANYONE who resisted Marxism a "fascist". It didn't matter what your political views were. If you weren't in favor of communism, you were a fascist.

And now Antifa-tards have adopted the same strategy. Of course to anyone with any historical or ideological understanding whatsoever, it's demonstrably absurd. Especially when you're talking about small-government, anti-authoritarian American conservatives, but Marxists focus their efforts on useful idiots that will reflexively regurgitate simplistic buzz terms.

They couldn't tell you a single bullet point on the Italian Fascist Party platform from 1919, but they're just smart enough to detect you're not in favor of their agenda. And that's all they need. It's ungodly ironic, because their platform actually closely mirrors that of the fascists. You can't make this shit up.

and here I was thinking it was just a bunch of ill-informed ferals throwing insults in the hope of emotionally manipulating others to hate the ferals' political enemies.

Only the regimes definitions matter.

Doesn’t matter what the definitions of words in the English language were for the last several centuries.

Brings to mind the meme where in the future, soyjack calls gigachad a racist (or a fascist) and he just says "thank you!"

You can't interact with anything these people say logically, especially insults.

No, it's: anything you say against my fascism.

learn to recognize the sounds that faggots make

With just a cursory glance at his Twitter, it does seem Dash says "I'll say that again" a lot.

Dash is such a prolapsed anus faggot. Every time I see his face I think about rooftops in the middle east.

It is 100% obvious leftists have no clue what fascism is. They seriously believe they are not fascists.

they're actually not. They're commies. Who are worse than fascists .

How dare you not want totalitarianism... You fascist!

Well duh, what did they think would happen? They didn't think that people would see this and be like "well, guess Trump is tainted now, better run someone else in 24" did they? Are they fucking stupid?

The left is so out of touch they still believe Fox News is a thing.

Yang was promised a cabinet position if he endorsed Biden and dropped out of the race. They rescinded the deal after he took office. He has every reason to hate Biden for backstabbing Yang.

Wait, just kidding, that's not news. Leftists have been thinking that unironically for over half a decade now.

These people know so little about reality that they think FOX News supports President Donald Trump.

Dangerous fascists oppose raiding homes of political enemies. They must be stopped at all costs!

either you're with us or the fascists...

Many losers will now seek the winning side.

Andrew Yang is starting a new political party. It's likely this party will get used by democrats and he's their willing tool. Still if he or someone he knows runs for president under this party the FBI can raid them under false pretenses so it's best he speak up against this before 2024. Anyone with a brain understands that at anytime the FBI can raid anyone for an anything. This is why this matters and be why the left is so dumb for not seeing it. None of us are safe from the regime.

Yang is off the reservation, throw a net over him.

Yang didn’t get rich by being stupid

God, these people are sub-NPC levels of insufferable.

Another coloured man has an opinion he’s not supposed to have! REEEEEeeee.

I am sure fascists loved it when men shot their whipped cream into other guys mouths... He totally would fit in.

LOL...A communist taking the moral high ground talking about Fascists in his imagination

Kind of a jewy name

Well, socialists were the fascists, soooooooo Andrew hasn’t changed at all.

If you don't love authoritarianism and brown shirt thugs attacking the establishment's political enemies, you're a fascist.

Dash? What a gay fucking name!

They have the same lens here as Russia…

“Put in name here “ has the same talking points as Russia…

“Put in mama here” has the same talking points as GOP…

Telling the truth is telling the truth, trying to hide it or dissuade people from talking about a truth because someone you don’t like says it, is wrong.