TheDonald
Communities Topics Log In Sign Up
Sign In
Hot
All Posts
Settings
Win uses cookies, which are essential for the site to function. We don't want your data, nor do we share it with anyone. I accept.
DEFAULT COMMUNITIES • All General AskWin Funny Technology Animals Sports Gaming DIY Health Positive Privacy
1120 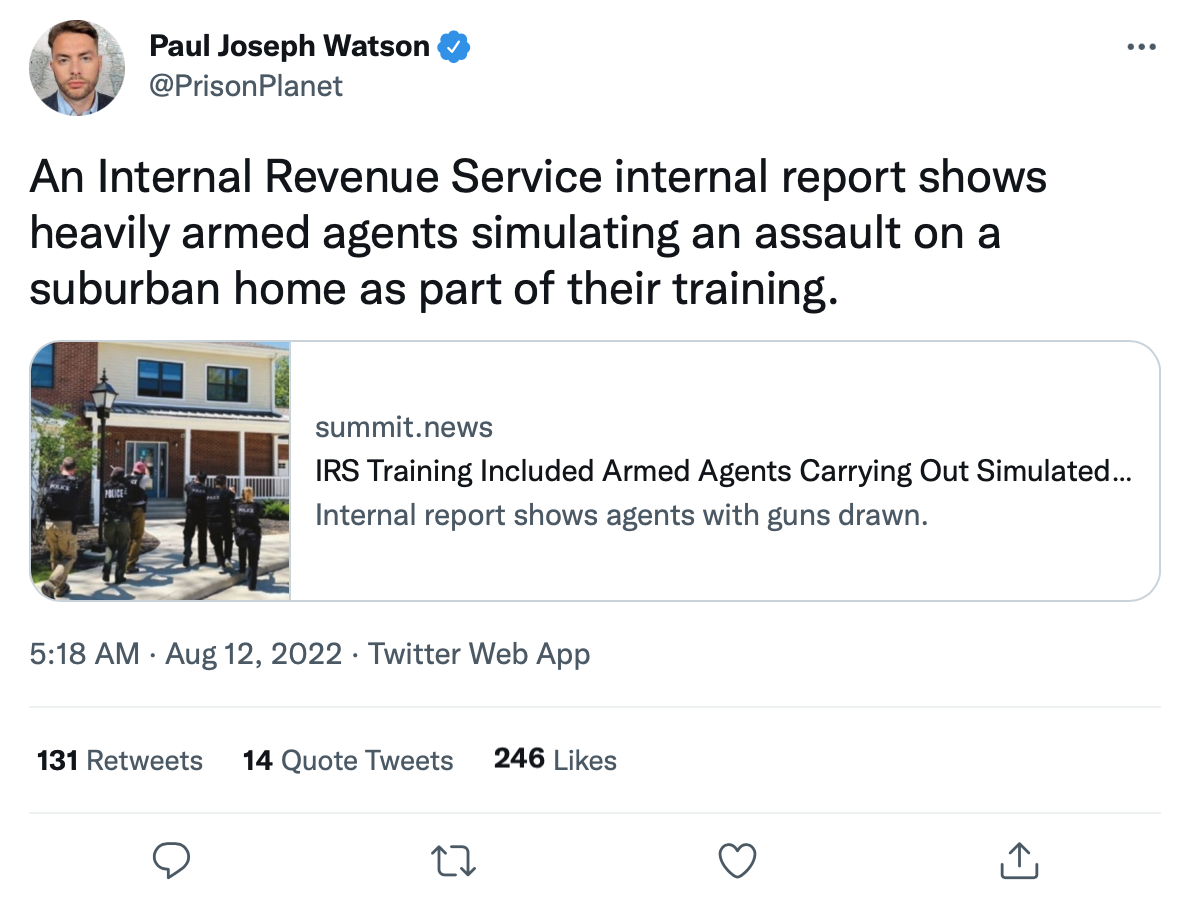 Who put this into the bill ? The language for the hiring of the IRS agents and the budgeting ?

This would have had to go through multiple committees and someone signed their name to it.

They did it as a Budget Reconciliation bill instead of a normal gouging bill, which essentially means they can do what they want with no filibuster to stop them

I’m aware of the filibuster aspect, what I’m interested to find is who or what group inserted the language into the bill.

Such as when bills are sponsored or co-sponsored, a name is attached.

I don't know the answer to that either, but I definitely heard Biden openly calling for exactly this 6 months or so ago. So I suspect he was the driving force.

It should surprise nobody. Obama weaponized the IRS too. This is exactly why our founders demanded no direct taxation, and also why the Communist Manifesto demands there be a progressive income tax. Once government claims ownership over the product of your labor, they literally own you.

And it's clear that modern Democrats have every intention of using our reprehensible Marxist income tax to wrap their hands around our throats, as is evidenced by Biden's comments.

Are they planning for booby traps?

Nope. They're not used to resistance.

Do they think they can actually get 87,000 vaxxed lazy fucks to get off their couches and apply for these jobs?!!!

Yes because they will tell them that they are saving the world from fascist. These are kids that have been lied to their entire life. They are heavily in debt and have no future and now they get to go after the people that they have been told are ruining their lives. We gave up public education 50 years ago and now we are paying the price. I was in school in the 70s and it had already started.

They will use the Antifa members that dont already have a criminal record and then through social media those people will tell their commie friends that its open season on Trump supports. This is going to be a flash mob of crazy. Most people in this chat are too old to understand modern social media. Once the raids start there will be a flood of applicants to get in on the action. I wouldnt be surprised if they start an underground version of 4chan bragging on what they are doing. "Oh look at the Trumpers crying as we take their stuff".

It'll spark a civil war. These people are dumb and their long term survival is questionable. I'm gonna laugh when this place is flooded with heavy weapons from the eastern hemisphere. It'll be cool to see a technical with an ATGM strapped to the back of it in America.

Not to mention, 87,000 that don’t suddenly have myocarditis?

If they do reach that number, IRS will be filled with the types like that same guy who the civilian called his local police on. Dude started hyperventilating after being arrested and sobbing like a bitch 😂 If Armed IRS show up, call the cops, local sheriff’s office.

Alot of widows that year...

When they can’t get you to give your money, they will then just take it with threat of force.

And that's assuming the IRS will faithfully only carry out its function of taking money.

These are commies we're talking about. They're making another goonsquad, and it's going to do whatever they want.

They are building an army they can use as a cudgel against political opponents, they will then use this new team to make a social credit system. Drain our coffers devalue our currency and then claim on the debt they incurred in our name...all to push people further into poverty.. why? Because it is how you break the back of the people and siphon out their wealth..

What a coincidence?!? Defending a suburban home is part of my training. Thanks Dad!

They may get the best of firearms, and get trained once or twice...but to think they will be an effective enforcement? Nah.

They'll be just the next version of the old monarchy goon squad - the king's enforcers sent out to extort and shake down the population for more money.

Except this time, they will find citizens will shoot back.

Clear evidence the government does not serve the people, as they are training the IRS to do home invasions and urban assaults.

America - are you waking up yet?

Yep. It takes years of experience to be proficient. These "employment agency" ass clowns are the type that would leave their "gear" lying around. And they won't be ready for the field for months/years until they complete all of their online sensitivity/gender/pronoun training courses.

It'll be like the "Pitchfork Rebellion" in the Soviet Union, except everyone has guns this time.

And how we burned in the camps later, thinking: What would things have been like if every Security operative, when he went out at night to make an arrest, had been uncertain whether he would return alive and had to say good-bye to his family? Or if, during periods of mass arrests, as for example in Leningrad, when they arrested a quarter of the entire city, people had not simply sat there in their lairs, paling with terror at every bang of the downstairs door and at every step on the staircase, but had understood they had nothing left to lose and had boldly set up in the downstairs hall an ambush of half a dozen people with axes, hammers, pokers, or whatever else was at hand?... The Organs would very quickly have suffered a shortage of officers and transport and, notwithstanding all of Stalin's thirst, the cursed machine would have ground to a halt! If...if...We didn't love freedom enough. And even more – we had no awareness of the real situation.... We purely and simply deserved everything that happened afterward. Aleksandr I. Solzhenitsyn , The Gulag Archipelago 1918–1956

Unfortunately it's likely to be effective. They've studied human nature for decades, been involved in most of the violent revolutions in the world and control 99% of the media and means of communication.

They are masters of pushing just far enough for people to vow to react "next time" but they'll let the dust settle and push again, forever pushing new boundaries.

They know what pulls our strings and will do this systematically to both discourage future resistance and make each individual try and keep quiet, never expecting that they will be next or when they get taken into custody it will all be sorted out because they've done nothing wrong so it's all been a big mistake.

Learning from the Gulag Archipelago they managed to arrest and execute 22 million people without any meaningful resistance. Even as they were sent to the Gulags many people thought there had been a mistake in their individual case and it would be sorted soon.

Learning from Rules for Radicals they never target a mob as the mob is strong. Instead the polarise and isolate individuals and pick them off one by one. We can see them doing that to people around Trump and the more they pick off the more isolated he becomes. Think about it, General Flynn, Manifort, Trumps attorney, Bannon, Roger Stone, Rudi Guilianni etc etc etc

THIS! Keep posting and reposting this. Too many idiots and tough guys on this site…

So if one applies for the job then one is a communist.

Or an insider planning on sabotage.

I’d bank on there being a vaccination requirement for employment, federal and all. Only those dedicated reformed inoculated sheep may attempt such a dangerous undercover endeavor. Likely to end in martyrdom as they would be required to stay “up to date.”

please please come for your $137.53 in unpaid taxes. I'll be waiting for you.

It's not enough to get the FBI to raid your shit. Now irs wants a piece of that ass lol

when the irs raids an fbi fedboi, its like an impromptu pride parade

It would be a shame if someone reached out to the Russian hacker group "Killnet" so we could get our hands of the personnel roster of the IRS after they finish hiring more goons. We need to ID these people. No more games.

Be sure to shoot the dog. We left a special surprise inside of Fluffy after we had her stuffed.

They're training the 87,000 new and well armed bolsheviks for their daily duties.

Can you imagine having the barrel of a gun at your head because of a typo on a 1099 form?

Something tells me this ain't about taxes. Taxes are the reason they'll use to kick in your door and plant evidence. It will only happen to conservatives.

They aren't there for money, I'm sure. This isn't about tax collection. It's an army with no transparency or accountability that kicks down your door under the guise of tax enforcement. This is just a Democrat backed hit squad who are here to pick off political dissidents.

It'll backfire and cause a wider conflict that topples the entire federal system. It'll be fun.

I'm guessing they are planning on the FBI falling on their sword and having another agency already funded and armed to absorb them.

this is why they government also invented the 45-70.

Introducing the pieces of shit who will be the new gestapo, coming soon to your neighborhood.

I'm probably on that list. My refund is still "processing".