TheDonald
Communities Topics Log In Sign Up
Sign In
Hot
All Posts
Settings
Win uses cookies, which are essential for the site to function. We don't want your data, nor do we share it with anyone. I accept.
DEFAULT COMMUNITIES • All General AskWin Funny Technology Animals Sports Gaming DIY Health Positive Privacy
753 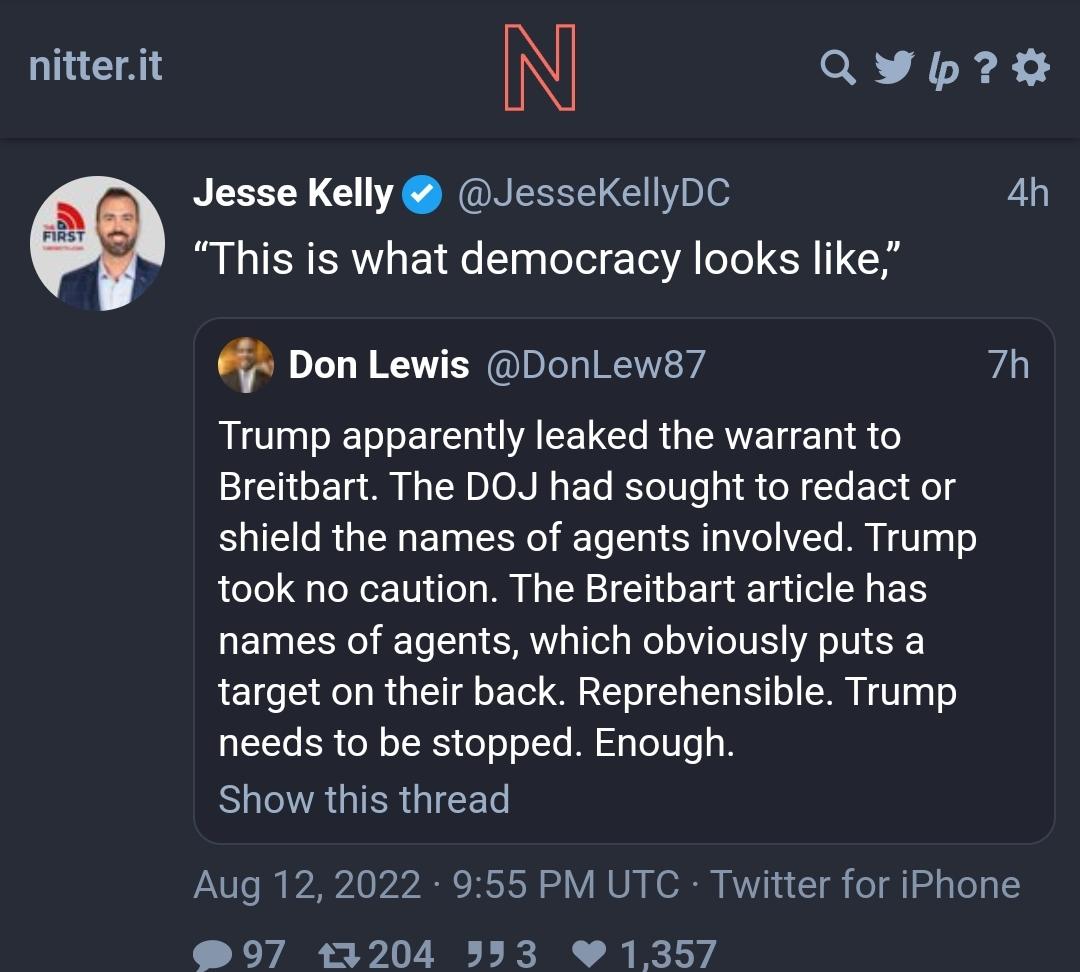 Nope, name them all.

"I was just following orders" is not a valid defense. They willingly followed the orders knowing the consequences, they shouldn't be allowed to hide behind it.

No secret police in America.

Naming names is the first thing resembling disincentive for these tyrants.

Obviously, those agents have nothing to fear for enforcing the law as they did. But it's public information that they were mentioned on the warrant. You don't get the benefit of anonymity when you file public records. Geez you'd think they'd know that.

Sorta hard to be the secret police when people know your fucking names, huh?

If those fedbois did nothing wrong, they shouldn't worry about being named, right?

Wasn't everyone just doxxing everyone? Everyone gonna die!

Fuck around and find out

Trump is the real antifa...

‘Must protect whistleblowers at all costs’ ….oh wait, not now?

I dont get it is that a quote from AOC from the riots or something?

Where's the guy that posts the helicopter emoji murals? This is a thread for him to frolic in!

Fuck you... anonymity in government is a recipe for TYRANNICAL decisions and genetal douchbaggary.

If they did nothing wrong they have nothing to worry about right?!

But we all know the answer to that. "Just following orders" is no excuse to be a jackboot thug. Fuck the fbi!

It’s funny because those faggot traitor agents are going to hang:

There's a lot wrong with this guy's tweet. For one, it was unsealed, therefore it's now public record. Trump didn't leak it to Breitbart, it's public now. Anyone can go look it up. I don't even know if the DOJ wanted the names redacted or not, but like you said, it's pretty UnAmerican to have a secret police force.

The reason the left has reversed so many of their positions is because they're under the illusion they've completely won. When they were more underground Communists, they wanted completely opposite things. But now that they have a degree of power that they think they'll never lose, they want everything they were against and more. Kind of like how they wanted freedom of speech when they were the fringe, but now that there's more of them, they want censorship.

True, the Bolshevik model - cry when you're the underdog, be ruthless when in power.

This won't end well for many of us, and all of them.

Funny, the left LOVES to dox cops in police shootings, Michael Brown, I don’t have time to look them all up but they love to threaten their families and give them death threats.

We need the names and other info of corrupt government stasi.

This and the Epstein list. Cough ‘em both up.

Me and the lads gonna read this.

Their behaviour put a target on their backs, fronts, and sides, not Donald Trump.

So, what now? The left loves cops and are all of a sudden worried about them??

Trump needs to be stopped. TRUMP does. Not the FBI. Or the DOJ.

Alex, I would like to solve the puzzle..."fuck off"

It's not 'leaking' if Trump is the person the warrant was seved against. He has no requirement to keep the warrant a secret.

…Point is, they have no problem “doxxing” executors of a warrant, so long as it fits their narrative.

The targets are on their heads.