TheDonald
Communities Topics Log In Sign Up
Sign In
Hot
All Posts
Settings
Win uses cookies, which are essential for the site to function. We don't want your data, nor do we share it with anyone. I accept.
DEFAULT COMMUNITIES • All General AskWin Funny Technology Animals Sports Gaming DIY Health Positive Privacy
3307 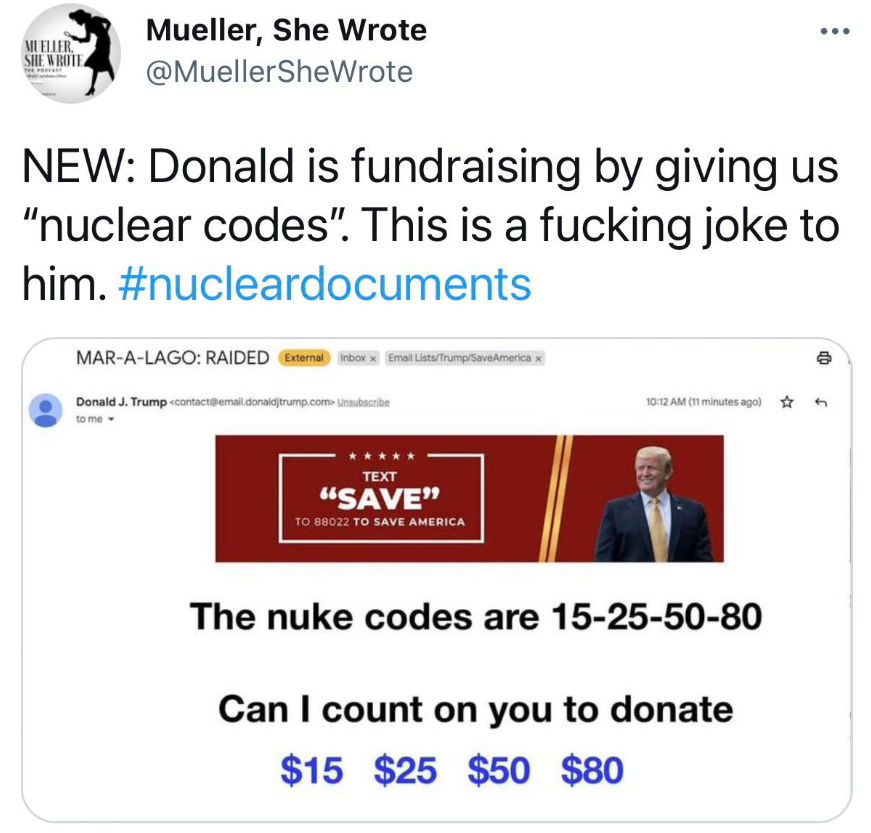 Sadly it's fake, but he should do it

Oh that’s a pity. Would have been God level trolling.

Some based T-shirt company better be making some nuclear code shirts.

The fact that liberals get so unbelievably pissed about things like this is why he does it. Having a high intelligence is mandatory for a good sense of humor, which is why liberals get so mad at this, they literally can't comprehend the humor in it.

Also why the Left can't meme.

Not being able to laugh at things is so progressive.

HOW CAN YOU LAUGH WHILE CAPITALISM AND THE PATRIARCHY STILL EXIST???

Libtards : OMG he is using nuclear codes to fundraise BAN HIM

Their response is "The right can't meme",

and that perfectly sums the whole issue up.

Except they make those 4 words into a paragraph.

The best memes from the left are just repackaged memes stolen from the right. Their meme "culture" is either degenerate cringe or bizarro world right-leaning memes.

repackaged memes stolen from the right.

Which also explains why "entertainment" has turned to shit because it's the same tactic they've used for that. "Let's remake that movie or re-use that idea. We just have to change it a little to make it more woke." Of course, not realizing that all the woke changes are what strip their product of every ounce of enjoyment.

That said, I've never actually seen a good or meme from the Left, nor one that makes sense. Ever.

Bro, that creatures name is

Well they keep believing total lies no matter how many times they get duped. They think the nuke thing is super cereal. They just can’t accept that they’re the biggest suckers that have walked the planet.

I don't think it's as complicated as that. If the whole espionage, nuke codes thing was real and the person who did it was making jokes, it wouldn't be very funny.

The joke is that it's all such ridiculous bullshit there's no reason to be serious, but if they buy into the lie, there is no joke to get.

The left’s only virtue is being offended. If you’re offended that means you’re oppressed. If you’re oppressed it means the system is unjust and stacked against you so therefore the leftist saviors have to tear it down to right all those wrongs. That’s their goal, to convince everyone that only they can remake our world into utopia.

OK, how about San Fransisco ?

Oh my good that’s hilarious, and now I have night giggles and tears.

Took me three times through, but I got it.

Oh that’s a tough one, a double switcheroo.

False, the real code is:

I thought it was Foxtrot, Juliet, Bravo

If it's real, I didn't get the email.

Nothing on my end either 😔

They wear masks while alone in their vehicles.

or they told us so. which is worse. maybe?

Also I’m pretty sure just having whatever the codes are would do nothing. Like they aren’t just gonna take the codes from any rando to nuke and kill whoever without any sort of chain of command, events, or circumstances lol

“Guys someone with a random computer typed the nuke code in a message! Instead of verifying anything, like with the president, or military, or anything, let’s just release the nukes on someone random lmao”

That’s what I thought. Probably daily using a randomizer.

You don't know me, but you make me so happy 🤣

beat me to it

Oddly enough, it's a joke to us too!

he can't keep getting away with it!

Meanwhile, the MAGA/AF Trump endorsed candidates are all but begging for money to compete in Nov.

Another reason the Don should not announce till after Nov, so they can at least raise some pocket change and get minor attention.

Don't let them use Trump to make money! I agree he should wait as long as he can. Let them work for a change.

Any fucking retarded Trump-deranged leftist who still has a reference to "Mueller" in their bio deserves to seethe and rage...

Come on man, everyone knows Mueller took out Trump for his terrible Russian collusion! That's why they're grasping at straws with vague search warrants trying to find something, anything to stop Trump.

Incorrect, comrade, it is all 2's straight across because he keeps shitting the bed.

If you don't think that's funny, you're wrong.

We don't call him GEOTUS for nothing.

It’s a fucking joke to anyone with a brain cell.

Donald J Trump is the greatest troll to ever exist. He does it perfectly, he is a time traveler. I wish I was around to see the paintings of him from three next centuries.

Nobody makes the little NPC left seethe like him

What’s funny is the nuke codes could literally be leaked and… nothing would happen. In fact I doubt nuke codes even exist as these idiots imagine them.

What do these people think, like there’s just some hotline you call or website you go to, and you just have to have the code! Some brainless idiots on the other end maintaining the nukes in the silos are just waiting for a series numbers they’re told are correct, and it’s the only thing standing in the way of world war 3! any crack addict can provide them over the phone or online, and as soon as those numbers are provided they just let the nukes go! “The numbers came in, people have to die, thems the rules!!!!”

No, what’s actually scary is someone in an authority figure who doesn’t have a brain who is in charge of delegating to people responsible for those bombs. Joe Biden simply existing is a million times worse then fake nuke code jokes

None of these idiots even knew about any nuclear codes. They will believe anything you tell them. Oh yeah, they waited 18 months because it was such an immediate crises.

How can people be so absolutely fucking stupid?

LOL. This is Nuclear Troll level.

But but MSDNC said the walls are closing innnn rEEeEeeeEe

Is that from Trump or the GOP's Winred?

Feeling confident as he should

I would have thrown my next paycheck at Donald if this email would have reached my inbox! This is hilarious! 😂😂😂

He should have said I changed the deacrived nuclear codes to ... Joe Biden is a Cuck.

No sugartits, you are the joke to us!

Fuck me the Left is so very stupid.

Trump's team are master trolls. I wouldn't have it any other way.

Leftists never EVER get the joke. They ARE the joke.

How about the self-destruct code from Star Trek?

"Mueller, she wrote"- opinion instantly discarded. Bet pronouns in bio, too despite it being in the handle.

Man, someone still won't let that fiction go. ...and it is not like the FBI, itself, has not become a joke.